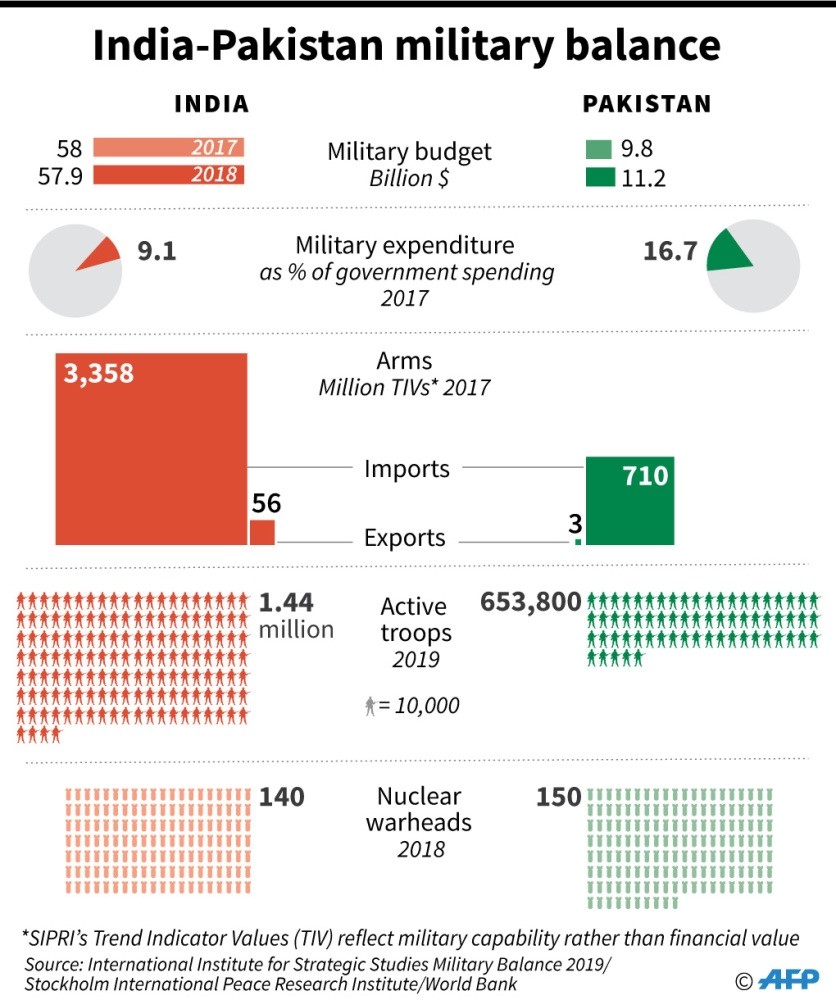 The prevailing security landscape over the Kashmir region has resulted in military confrontations between Pakistan and India since 1947, with the two nuclear neighbors locked in a bitter arms race

Together with the heightened tension between India and Pakistan over Wednesday's aerial skirmish, the international community's attention has been drawn to the potential risk of a full-blown war in the region. Although both countries have played down such fears, the two nuclear neighbors have long stood at alert, facing off against one another over the disputed Kashmir region and their militaries are in an arms race to outdo each other as the possibility of going to war always lies in the background. In a dramatic escalation of tensions, Indian and Pakistani fighter planes engaged in tit-for-tat air raids over the disputed region of Kashmir.

Pakistan said it had shot down two Indian aircraft, one of which crashed in the Pakistan-held part of Kashmir and the other in Indian-controlled Kashmir and captured a downed Indian air force pilot, while India confirmed it had lost one plane and claimed it had shot down a Pakistani jet. In this rapidly worsening conflict, the first tangible sign of de-escalation came from Pakistani Prime Minister Imran Khan saying, "Can we afford any miscalculation with the kind of weapons that we have and you have?" Khan said in a televised national address Wednesday. 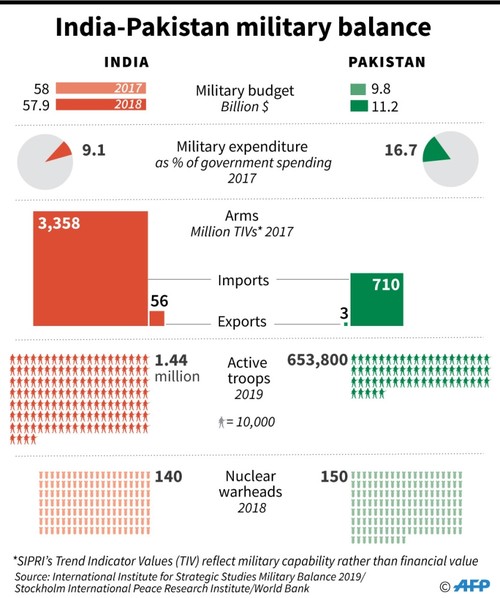 The latest aerial battle clearly shows that the lack of a solution over the Kashmir region for more than 70 years has led both nations to improve military readiness in the face of possible confrontation. Regarding the military balance between both nations, reports show that India has been firmly ahead in terms of budget, troop numbers and volume of equipment.

In 2018, India allocated $57.9 billion, or 2.1 percent of its gross domestic product (GDP), to support its 1.24 million active troops, according to reports from the International Institute for Strategic Studies (IISS) and the Stockholm International Peace Research Institute (SIPRI). Last year, Pakistan spent $11.2 billion, about 3.6 percent of its GDP, on its 653,800 troops. It also received $100 million in foreign military assistance in 2018.

According to estimates from SIPRI, 16.7 percent of Pakistan's annual government expenditure was spent on the military. By comparison, the Indian military accounted for 9.1 percent of government spending in 2017.

Regarding nuclear capabilities, both countries are believed to possess more than 100 nuclear warheads each and have conducted atomic weapon tests. Pakistan has 140 to 150 nuclear warheads, compared with India's 130-140 warheads, according to SIPRI. Pakistan sees a nuclear lead as vital insurance against possible aggression by its larger neighbor. Amid a risky regional security environment, India and Pakistan are not signatories of the Nuclear Non-Proliferation Treaty (NPT), a universal arms control agreement which seeks to prevent the spread of nuclear weapons. As nuclear weapon capabilities and developments are the matter of global concern, both countries have been facing growing international pressure to join the NPT.

World powers have called on the nations to de-escalate the tensions gripping the contested region. The dispute over Kashmir is one of the oldest on the agenda of the U.N. Security Council, along with the Israeli-Palestinian conflict. The region, which is split between the two countries, but claimed by each in its entirety, has been the cause of two wars between the neighbors since they were partitioned in 1947. In an interview with Daily Sabah in 2016, the Pakistani prime minister's special envoy highlighted that the Kashmir dispute could be solved at the United Nations level "through the democratic method of a free and impartial plebiscite conducted under the auspices of the United Nations."