Pakistan hands over captured Indian pilot as 'gesture of peace' 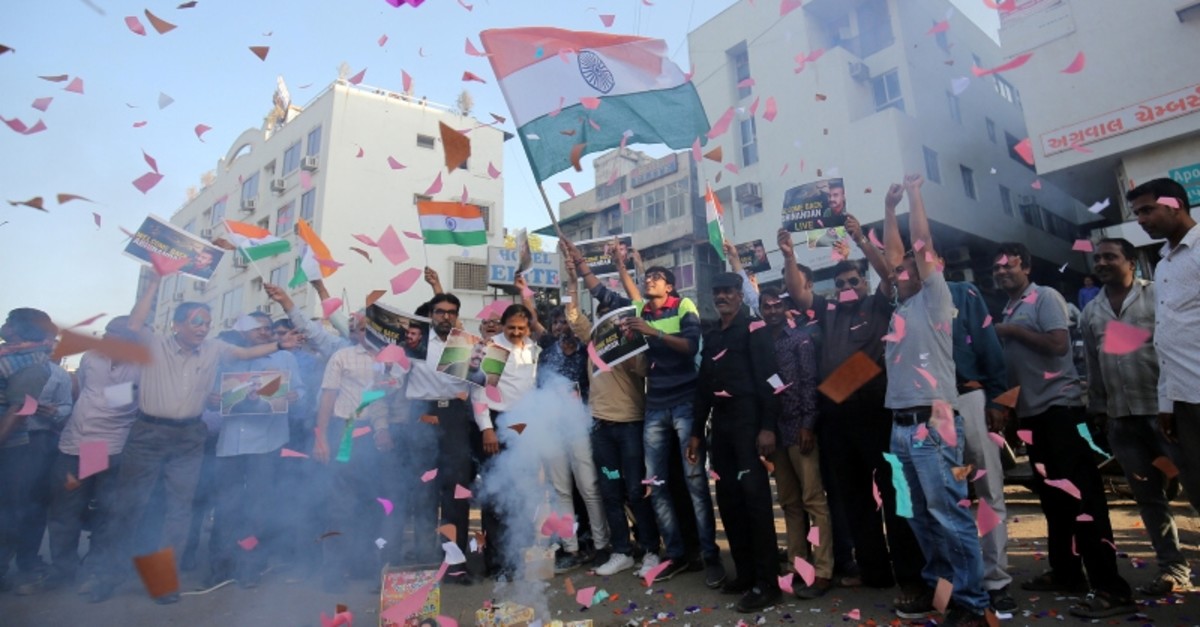 People celebrate before the release of Indian Air Force pilot, who was captured by Pakistan on Wednesday, in a street in Ahmedabad, India, March 1, 2019. (Reuters Photo)
by Compiled from Wire Services Mar 01, 2019 3:20 pm

Pakistan released a downed Indian pilot back to India on Friday, the Pakistani foreign ministry said, amid a tense standoff between the nuclear-armed neighbors.

Pakistani officials brought the Indian pilot to a border crossing with India for handover, a "gesture of peace" promised by Pakistani Prime Minister Imran Khan amid a dramatic escalation with the country's archrival over the disputed region of Kashmir.

Abhinandan was taken in a convoy that set out from the eastern Pakistani city of Lahore to the border crossing at Wagah earlier in the day, escorted by military vehicles with soldiers, their weapons drawn.

On the Indian side of the border, turbaned Indian policemen were lined up along the road as a group of cheering Indian residents from the area waved India's national flag and held up a huge garland of flowers to welcome him back.

The handover comes against the backdrop of blistering cross-border attacks across the disputed Himalayan region of Kashmir that continued for a fourth straight day, even as the two nuclear-armed neighbors sought to defuse their most serious confrontation in two decades.

Tens of thousands of Indian and Pakistani soldiers face off along the Kashmir boundary known as the Line of Control, in one of the world's most volatile regions.

Tensions have been running high since Indian aircraft crossed into Pakistan on Tuesday carrying out what India called a pre-emptive strike against militants blamed for a Feb. 14 suicide bombing in Indian-controlled Kashmir that killed 40 Indian troops. Pakistan retaliated, shooting down two Indian aircraft Wednesday and capturing a pilot.

Since the escalation, world leaders have scrambled to head off an all-out war on the Asian subcontinent. Pakistani Prime Minister Imran Khan on Thursday said he would seek Turkey's help in defusing tensions and talk to Recep Tayyip Erdoğan.

Khan announced the release of the pilot Thursday: "We are releasing the Indian pilot as a goodwill gesture tomorrow."

But India made it clear that the latest escalation has changed its strategy and that going forward, it will strike, including inside Pakistan, if they get information of an attack in the planning. Indian Prime Minister Narendra Modi earlier Thursday warned "India's enemies are conspiring to create instability in the country through terror attacks."

The agency issued a statement saying all domestic and international flights will be allowed to and from the cities of Karachi, Islamabad, Peshawar and Quetta. It said other airports, including the one located in the eastern city of Lahore that borders India, will remain closed until March 4.

Residents of the Pakistani border town of Chikhoti reported heavy shelling overnight and Friday morning. More than 200 people had fled to a military organized camp about 20 kilometers (16 miles) away from the border.

Police in the Indian-controlled Kashmir said one man was wounded and at least two civilian homes were damaged in the cross-border shelling.

The Himalayan region has been divided between India and Pakistan since independence in 1947. The two countries have fought three wars and went to the brink of a fourth in 2002 after a militant attack on India's Parliament.

The first war broke out over Kashmir after partition divided the subcontinent into India and Pakistan. The Maharaja of Kashmir, the local ruler, acceded to India as tribal fighters from Pakistan launched attacks.

In 1965, India and Pakistan fought a second brief war over Kashmir, before a cease-fire was declared. They fought a third war in 1979 over East Pakistan, which gained independence with the help of India and became Bangladesh. After a cease-fire was signed in 2003, relative calm has reigned over the region. Up until the present, tensions have remained along the highly militarized frontier in disputed Kashmir amid promises for the full implementation of the 2003 cease-fire agreement.