49 killed in terror attack on mosques in New Zealand's Christchurch 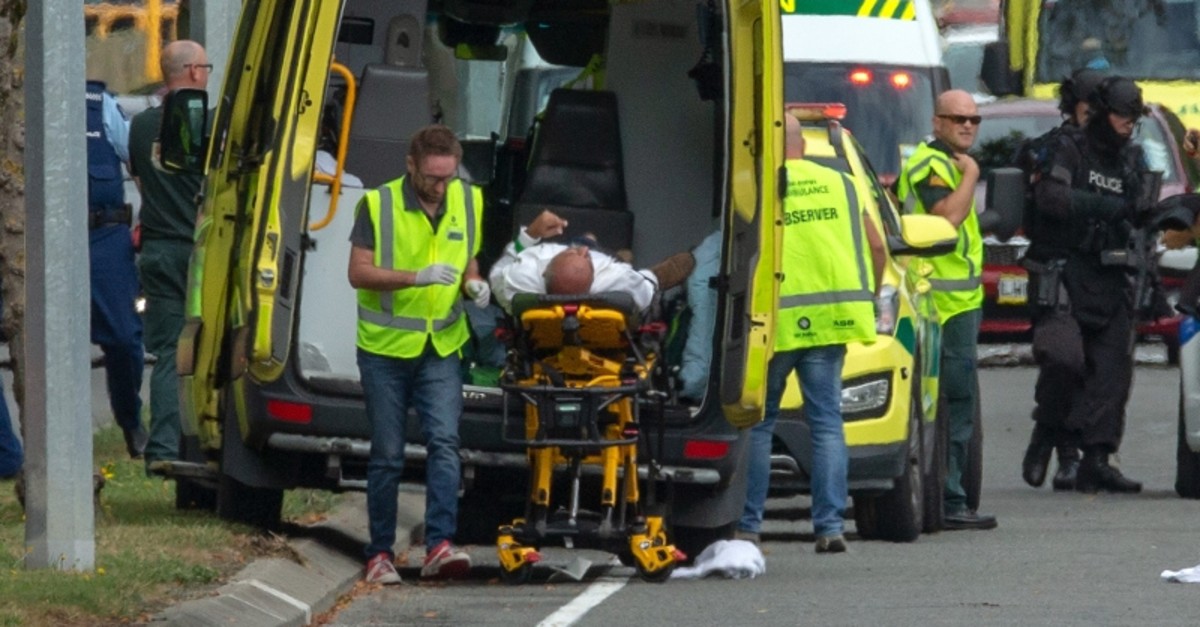 A right-wing terrorist who rampaged through two mosques in the quiet New Zealand city of Christchurch killing 49 worshipers is due to appear in court on murder charges Saturday.

Forty-two people are still being treated in hospital for injuries, including a 4-year-old child, after an attack thought to be the deadliest directed against Muslims in the West in modern times.

The 28-year-old Australia-born suspect will be charged with murder in a court appearance that police said would be held behind closed doors for security reasons.

"It is clear that this can only be described as a terrorist attack," Ardern said, adding that New Zealand had been placed on its highest security threat level. She said four people in police custody held extremist views, but had not been on any police watchlists.

The man who claimed responsibility for the shootings said in a manifesto that he was a 28-year-old white Australian who came to New Zealand only to plan and train for the attack.

He declined to provide further details, saying the investigation was being led by New Zealand authorities.

The assailant, identified as Breton Tarrant, shared the attack live on his social media account, but Facebook was quick to react and delete the video.

The footage showed that the guns used by Tarrant during the attack bore the names of some historical figures, many of whom were involved in the killing of Muslims, as well as assailants of older attacks targeting Muslims in Europe and in North America.

A social media account had also posted a number of pictures of a semi-automatic weapon covered in the names of historical figures, many of whom were involved in the killing of Muslims.

He also left a 74-page anti-immigrant manifesto in which he explained who he was and his reasoning for his actions. He also targeted Turks in the racist text, saying Turks will be forced out of Europe and all mosques in Istanbul will be demolished.

Two Turkish citizens living in the area have been injured in the attack and are in good condition, Foreign Minister Mevlüt Çavuşoğlu said during a press conference.

Residents in Christchurch were advised to stay indoors and notify authorities if they see anything suspicious.

The country's police commissioner, Mike Bush, said three men and a woman were arrested following the shooting. He said there were "significant" number of casualties.

There were up to 200 worshipers inside the mosques for Friday Prayers.

Witness Len Peneha told reporters a man dressed in black entered the mosque and fired before running away before security forces arrived. Peneha said he saw "dead people everywhere" when he entered the Al Noor mosque to help those who were wounded.

Turkish Presidential Spokesperson Ibrahim Kalın strongly condemned the attacks in a Twitter post and offered his condolences to the deceased. "The world should raise its voice against anti-Muslim rhetoric to stop 'Islamophobic fascist terrorism'," Kalın said.

"This is a reminder that a house divided cannot stand: it is time to unite against all forms of terrorism," Turkish Presidency Communications Director Fahrettin Altun said in statement condemning the attack.

"I blame these increasing terror attacks on the current Islamophobia post-9/11 where Islam & 1.3 bn Muslims have collectively been blamed for any act of terror by a Muslim," Khan tweeted.

U.N. Secretary General Antonio Guterres "is shocked and appalled at the terrorist attack," his spokesman Stephane Dujarric said in a statement.

"The Secretary General recalls the sanctity of mosques and all places of worship. He calls upon all people on this holy day for Muslims to show signs of solidarity with the bereaved Islamic community," Dujarric said. "The Secretary-General reiterates the urgency of working better together globally to counter Islamophobia and eliminate intolerance and violent extremism in all its forms."

Christchurch is home to nearly 400,000 people and is sometimes called the Garden City. It has been rebuilding since an earthquake in 2011 killed 185 people and destroyed many downtown buildings.

Before Friday's attack, New Zealand's deadliest shooting in modern history took place in the small town of Aramoana in 1990, when a gunman killed 13 people following a dispute with a neighbor.