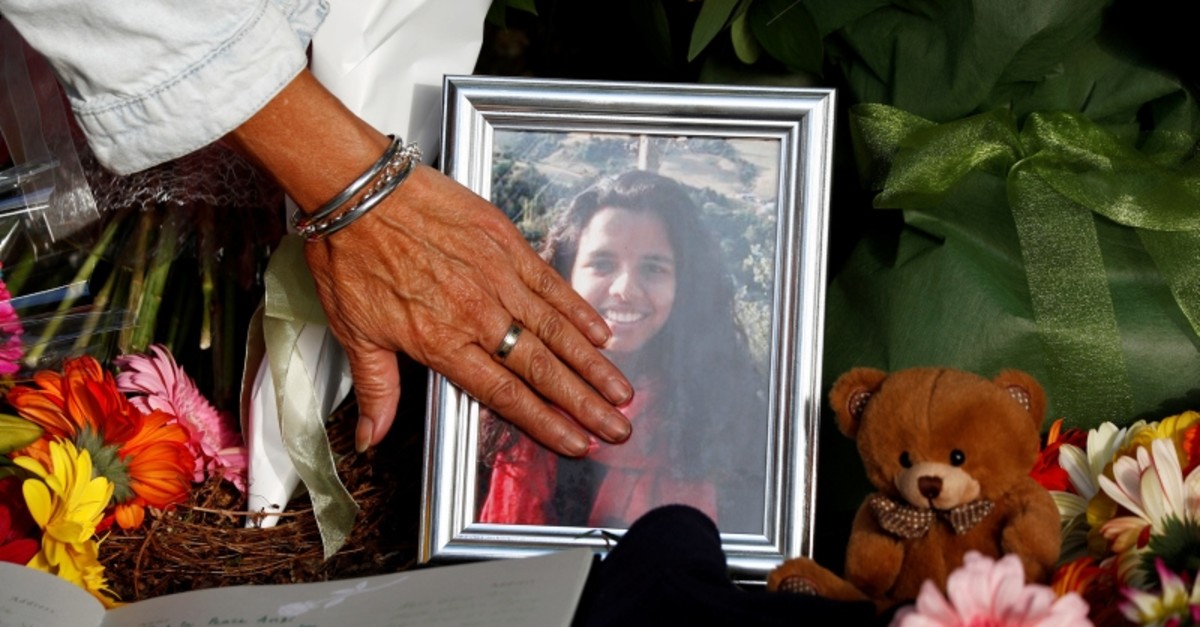 A woman touches a photo at a memorial site for the victims of Friday's shooting, outside Al Noor mosque in Christchurch, New Zealand March 19, 2019. (Reuters Photo
by Compiled from Wire Services Mar 19, 2019 11:39 am

The bodies of six of the Christchurch terrorist attack victims have been released to their families after an anguished-filled delay, New Zealand police said Tuesday, but they warned only a fraction of those killed had been fully identified.

Police said that all 50 autopsies had been concluded but only "12 victims have been identified to the satisfaction of the Coroner."

"Six of those identified victims have been returned to their families," the police said.

The delay has caused consternation among families of the dead, who would have liked to follow Islamic custom and bury their loved ones within 24 hours. Islamic tradition calls for bodies to be cleansed and buried as soon as possible.

Mohamed Safi, 23, whose father Matiullah Safi died in Al Noor mosque, earlier voiced frustration with officials for not giving grieving families any indication of when the bodies would be released.

"There's nothing they are offering," the Afghan refugee said outside the family support center in Christchurch.

The police said they were "acutely aware of frustrations by families associated with the length of time required for the identification process following Friday's terror attack."

"We are also looking at any way to improve our communications with the families and ensure they are kept fully informed about what is happening. We are doing all we can to undertake this work as quickly as possible and return the victims to their loved ones," the police said.

New Zealand's Parliament gathered Tuesday for a special meeting for the first time since the Christchurch attack. The session was opened by imam Nizam ul Haq Thanvi, who recited verses from the Quran for the victims of last week's massacre of peaceful worshippers.

Prime Minister Jacinda Ardern began her address with the Islamic greeting "assalamu aleikum" or "peace be upon you."

Ardern declared she would do everything in her power to deny the accused mosque terrorist a platform for elevating his white supremacist views, after the man dismissed his lawyer and opted to represent himself at his trial in the killings of 50 people.

"I agree that it is absolutely something that we need to acknowledge, and do what we can to prevent the notoriety that this individual seeks," Prime Minister Jacinda Ardern told reporters. "He obviously had a range of reasons for committing this atrocious terrorist attack. Lifting his profile was one of them. And that's something that we can absolutely deny him."

She demurred about whether she wanted the trial to occur behind closed doors, saying that was not her decision to make.

"One thing I can assure you — you won't hear me speak his name," she said.

Later, in a passionate speech to Parliament, she urged the public to follow her lead and to avoid giving the terrorist the fame he so obviously craves.

"I implore you: Speak the names of those who were lost, rather than the name of the man who took them," she said. "He may have sought notoriety, but we in New Zealand will give him nothing, not even his name."

The terrorist's desire for attention was made clear in a manifesto sent to Ardern's office and others before Friday's massacre and by his livestreamed footage of his attack on the Al Noor mosque.

The video prompted widespread revulsion and condemnation. Facebook said it removed 1.5 million versions of the video during the first 24 hours, but Ardern expressed frustration that the footage remained online, four days later.

"We have been in contact with Facebook; they have given us updates on their efforts to have it removed, but as I say, it's our view that it cannot — should not — be distributed, available, able to be viewed," she said. "It is horrendous and while they've given us those assurances, ultimately the responsibility does sit with them."

Arden said she had received "some communication" from Facebook's Chief Operating Officer Sheryl Sandberg on the issue. The prime minister has also spoken with British Prime Minister Theresa May about the importance of a global effort to clamp down on the distribution of such material.

Lawyer Richard Peters, who was assigned to represent Brenton Harrison Tarrant at his initial court appearance on Saturday, told the New Zealand Herald that Tarrant dismissed him that day.

A judge ordered Tarrant to return to New Zealand's High Court on April 5 for his next hearing on one count of murder, though he is expected to face additional charges. The 28-year-old Australian is being held in isolation in a Christchurch jail.

"He seemed quite clear and lucid, whereas this may seem like very irrational behavior," Peters told the newspaper. "He didn't appear to me to be facing any challenges or mental impairment, other than holding fairly extreme views."

Peters told the paper that Tarrant didn't tell him why he wanted to represent himself. He said a judge could order a lawyer to assist Tarrant at a trial, but that Tarrant would likely be unsuccessful in trying to use it as a platform to put forward any extremist views.

Under New Zealand law, a trial is "to determine innocence or guilt," Peters said. "The court is not going to be very sympathetic to him if he wants to use the trial to express his own views."

Ardern previously has said her Cabinet had agreed in principle on tightening gun restrictions in New Zealand and those reforms would be announced next week. She also had announced an inquiry into the intelligence and security services' failures to detect the risk from the attacker or his plans.

New Zealand's international spy agency, the Government Communications Security Bureau, confirmed it had not received any relevant information or intelligence ahead of the shootings.

In Parliament on Tuesday, Ardern said there are justified questions and anger about how the attack could have happened in a place that prides itself on being open, peaceful and diverse.

"There are many questions that need to be answered and the assurance that I give you is that they will be," she said. "We will examine what we did know, could have known or should have known. We cannot allow this to happen again."

Meanwhile, Christchurch was beginning to return to a semblance of normalcy Tuesday. Streets near the hospital that had been closed for four days reopened to traffic as relatives and friends of the victims continued to stream in from around the world.