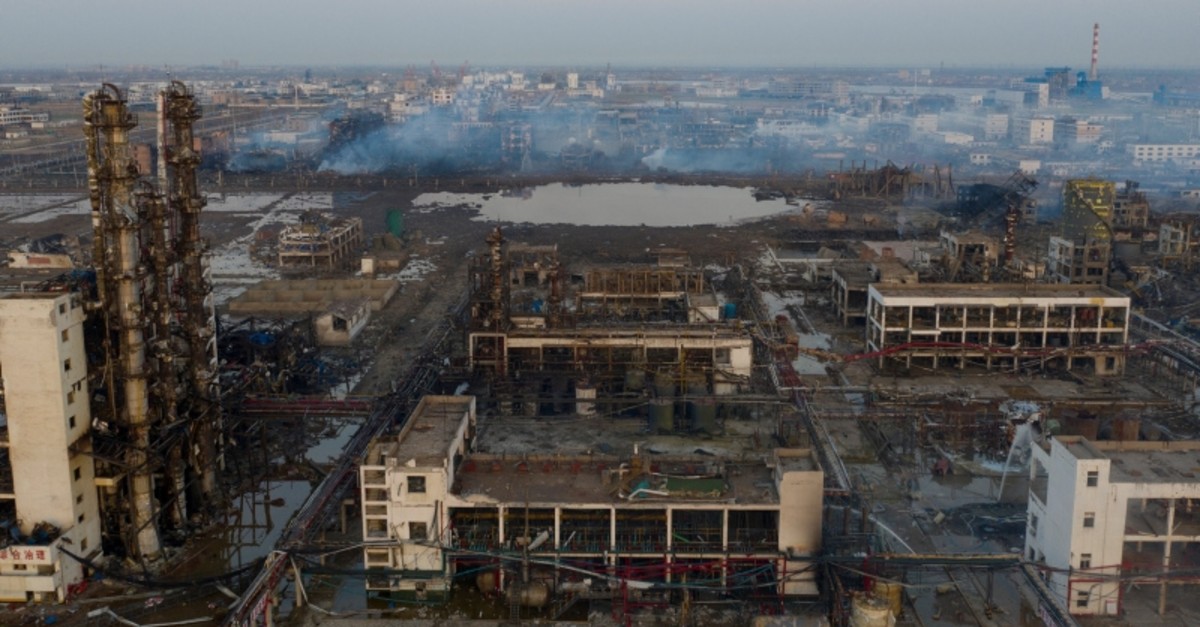 Damaged buildings are seen on the site following an explosion at a pesticide plant owned by Tianjiayi Chemical, in Xiangshui county, Yancheng, Jiangsu province, China, March 23, 2019. (Caixin Media via Reuters)
by Associated Press Mar 22, 2019 9:19 am

A massive explosion at a chemical plant in eastern China with a long record of safety violations has killed at least 64 people and injured 617 others, 94 of them seriously.

The death toll appeared likely to rise still further, with another 28 people still listed as missing, the official Xinhua News Agency reported Saturday. Just 26 of those confirmed dead in Thursday's explosion have been identified, it said.

The blast in an industrial park in the city of Yancheng, north of Shanghai, was one of China's worst industrial accidents in recent years. State-run television showed crushed cars, blown-out windows and workers leaving the factory with bloodied heads.

Schools were closed and nearly 1,000 residents were moved to safety as a precaution against leaks and additional explosions, the city government said in a statement posted to its microblog.

The blast created a crater, and more than 900 firefighters were deployed to extinguish the fire that burned into the night. Windows in buildings as far as 6 kilometers (4 miles) away were blown out by the force of the blast, which caused a magnitude 2.2 seismic shock.

The cause of the blast was under investigation, and people responsible for operations at the plant have been placed "under control," Xinhua said. It wasn't clear whether anyone had been formally arrested.

Drains and waterways running through and from the plant complex have been blocked to prevent toxic chemicals from running into the nearby Yellow Sea, under orders from the Ministry of Ecology and Environment.

The orders covered sewage and rainwater outlets while further assessments of air and water quality were ongoing, Xinhua reported.

A resident of the community of Chenjiagang, about 5 kilometers (about 3 miles) from the plant, said glass from windows smashed by the force of the blast injured neighbors.

"At the time of the explosion, I was almost deafened and I was terribly frightened," said the woman, who gave only her surname, Zhi.

"Relief work must be well done to maintain social stability. Meanwhile, environmental monitoring and early warning should be strengthened to prevent environmental pollution as well as secondary disasters," it quoted Xi as saying.

Xi said local officials need to learn the lessons of a recent series of industrial accidents to save lives and property, signaling a likely crackdown on safety violations at a time when many Chinese companies are being hit by a downturn in sales that is squeezing profit margins.

On Xi's orders, State Councilor Wang Yong led officials from the State Council, China's Cabinet officials to the explosion site to "guide the rescue and emergency response work and visit the injured people," Xinhua said. The State Council has been ordered to oversee the investigation into the cause of the explosion, an indication of the seriousness with which the government regards the incident.

The Yancheng city government statement said 3,500 medical workers at 16 hospitals were mobilized to treat the injured, dozens of whom remained in critical condition.

The U.N. said Secretary-General Antonio Guterres was "deeply saddened" at the loss of life and injuries and sent "heartfelt sympathies" to the families of the victims and to the people and government of China.

China experiences frequent industrial accidents despite orders from the central government to improve safety at factories, power plants and mines.

Among the worst accidents was a massive 2015 explosion at a chemical warehouse in the port city of Tianjin that killed 173 people, most of them firefighters and police officers. That blast was blamed on illegal construction and unsafe storage of volatile materials.

In November, at least 22 people were killed and scores of vehicles destroyed in an explosion outside a chemical plant in the northeastern city of Zhangjiakou, which will host competitions in the 2022 Winter Olympics.

Thursday's disaster occurred at a factory run by the Jiangsu Tianjiayi Chemical Co. Located among a cluster of chemical factories in Yancheng, it has a dismal safety record: In February 2018, China's State Administration for Work Safety cited 13 types of safety hazards at the company, including mishandling of tanks of toxic benzene, believed to be the source of Thursday's explosion.

Other local media reports said chemical fertilizer may have also been involved in the explosion.

Those violations came despite the plant having racked up 1.79 million RMB ($267,000) in fines since 2016 for violations of environmental regulations, according to a judgments issued by local county and city environmental protection bureaus. Those included improperly dealing with hazardous waste and evading air pollution supervision.

A 2017 explosion that killed 10 at a nearby plant prompted the State Administration of Work Safety to dispatch inspectors. They discovered over 200 safety hazards at chemical factories in Yancheng and four nearby cities, including 13 at the Tianjiayi plant. Safety hazards cited included leaks and drips, employees who didn't understand safety procedures, and a lack of emergency shut-off valves on tanks carrying flammable chemicals.

In 2014, the company's chairman, Zhang Qinyue, and Wu Guozhong, its former supply chief, were arrested on suspicion of dumping and burying hazardous waste byproducts near a temple and a village landfill, according to a Jiangsu court criminal judgment. They were convicted in 2017 and the company was fined 1 million RMB ($149,000).