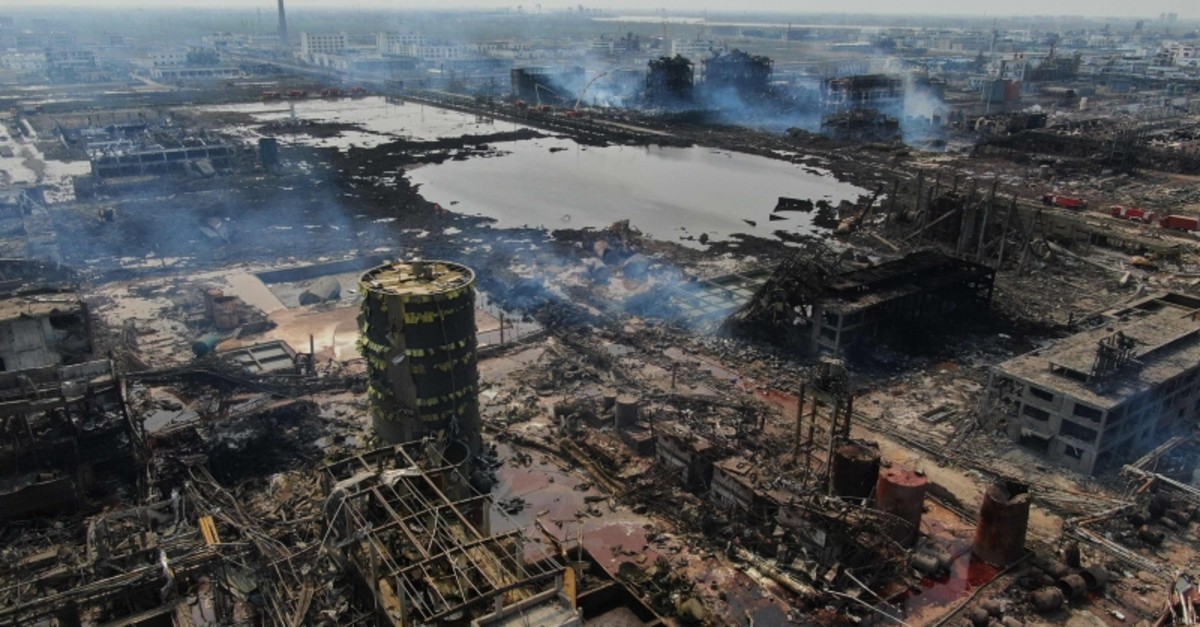 An aerial view shows a chemical plant after an explosion in Yancheng in China's eastern Jiangsu province, on March 23, 2019. (AFP Photo)
by Compiled from Wire Services Mar 25, 2019 12:00 am

The death toll from a chemical plant explosion in China rose to 78 on Monday, as Beijing ordered a nationwide inspection of chemical firms four days after one of the country's worst industrial accidents.

Thursday's explosion in Yancheng city, eastern Jiangsu province razed an industrial park and blew out the windows of surrounding homes.

The State Council, China's cabinet, told regional authorities around the country to launch a "comprehensive investigation" into companies involved in "nitration manufacturing and storage" in the wake of the blast.

They should also conduct risk assessments on chemical industrial parks, it said in an online statement, and identify and fix potential safety hazards in mining, fire, construction and other industries to prevent further accidents.

Officials in Jiangsu province said 56 of the victims had been identified.

More than 500 people are still in hospital, said city officials in Yancheng on their official Twitter-like Weibo account.

Among them, 13 are critically injured and 66 are seriously injured, the statement said.

Out of the 28 people who were reported as missing on Saturday, 25 have been found dead and three successfully rescued, said city officials.

The city government said some 89 houses were damaged beyond repair and families were resettled after those structures had been demolished.

Classes at 10 schools damaged by the blast resumed Monday morning, they added.

Local authorities are investigating the cause of the accident and said an unspecified number of people were taken into police custody on Friday.

The facility involved in the explosion belonged to Tianjiayi Chemical, a firm with 195 employees established in 2007 that mainly produces raw chemical materials including anisole, a highly flammable compound.

In 2015 and 2017, the firm was fined for violating rules on solid and water waste management.

Amid concerns of air and water pollution, the Yancheng city government has said that "pollution indicators are within the normal range" and that drinking water is "not affected."

Authorities said Saturday they had also dammed a tributary to the nearby Xinfeng River to prevent any "outflow of sewage from the chemical industrial park."

Thursday's accident is one of the worst of its kind since August 2015, when a chemical warehouse exploded in Tianjin killing 173 people.