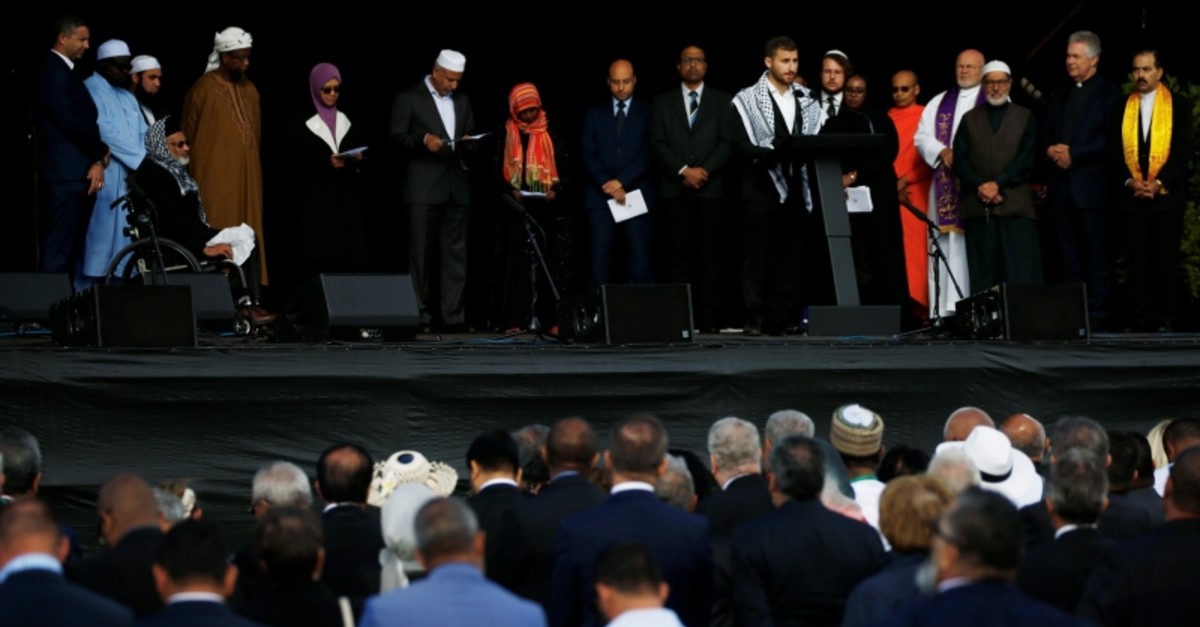 Names of victims of the mosque attacks are read out at the national remembrance service, at Hagley Park in Christchurch, New Zealand March 29, 2019. (Reuters Photo)
by Compiled from Wire Services Mar 29, 2019 12:00 am

New Zealand honored the victims of the far-right terrorist attack on Christchurch mosques in a commemoration ceremony on Friday.

Around 25,000 New Zealanders attended the memorial service for the 50 slain Muslim worshippers, including four children, who were killed in the twin attacks on the Al Noor and Linwood mosques during Friday prayers on March 15.

Yusuf Islam, Marlon Williams, and Hollie Smith performed at the service, Ko tātou, tātou - We are one, at Christchurch's Hagley Park.

"We learn about things through their opposites," Islam said. "And it's through opposites like this, the evilness of that act and what drove it, we find its opposite, which is the love and kindness and unity that has sprung up right here in New Zealand."

"Our hearts go out to the families of those whose lives were snatched away in that evil carnage while they were worshipping at the mosque two weeks ago," he said before playing "Peace Train" and "Don't be Shy."

"The world has been stuck in a vicious cycle of extremism breeding extremism and it must end," Ardern, who wore an indigenous Maori cloak known as a kakahu, told the gathering.

"We cannot confront these issues alone, none of us can. The answer to them lies in a simple concept, that is not bound by domestic borders, that isn't based on ethnicity, power base or even forms of government. The answer lies in our humanity.

"But for now we will remember the tears of our nation and the new resolve we have formed," she said.

"They were stories of bravery. They were stories of those who were born here, grew up here, or who had made New Zealand their home. Who had sought refuge, or sought a better life for themselves or their families," she said. "These stories, they now form part of our collective memories. They will remain with us forever. They are us."

"What words adequately express the pain and suffering of 50 men, women and children lost, and so many injured? What words capture the anguish of our Muslim community being the target of hatred and violence? What words express the grief of a city that has already known so much pain?" Ardern asked.

"I thought there were none. And then I came here and was met with this simple greeting. As-salaam Alaikum. Peace be upon you."

Mohamed Mohideen, the President of the Islamic Council of Victoria in Australia, said Ardern's response helped provide comfort and thanked her for her support of the Muslim community.

Farid Ahmed, one of the survivors, also addressed the crowd.

Ahmed, whose wife Husna was killed in the attacks, said he had forgiven the attacker.

"I want a heart that will be full of love and care and full of mercy and will forgive lavishly. This heart doesn't want any more lives to be lost. This heart doesn't like that the pain I have gone through ... that any human being should go through that kind of pain."

A particularly poignant moment came when a girl named Salma, the daughter of slain worshipper Ashraf El-Moursy Ragheb, briefly got up on stage to remember her dad.

"He was a really nice man," she said.

Amid the tears and grief, there was optimism among the crowd that the outpouring of compassion that followed the attacks would become the lasting legacy of its victims.

"I'm very positive about this continuing," said Manan Bohra, who runs a Muslim community center in Auckland. "When we're walking down the street people are coming up and expressing their peace and love.

"It was a very tragic event, but it's been a life-changing event for the nation itself."

Christchurch mayor Lianne Dalziel said the atrocity was "an attack on us all".

"Those actions were designed to divide us and tear us apart," she said.

"They have instead united us."

It was the third major memorial held in Christchurch since the March 15 slaughter of worshippers who were inside the two mosques for Friday prayers. Australian Brenton Harrison Tarrant, 28, has been charged with murder in the attacks.

The latest memorial service was a more formal occasion, with Morrison and foreign dignitaries from some 60 nations attending. Morrison later told reporters the service "was a thing of absolute beauty."

Australian prime minister said he has been working closely with Ardern to look at issues such as gun laws and blocking extremist content on social media.

"There are the laws we need now, to ensure that social media is not weaponized," Morrison said.

New Zealand's police force put on a show of force, closing down nearby streets and patrolling the park with semi-automatic weapons. Police Commissioner Mike Bush confirmed armed police from Australia were on site to assist their New Zealand counterparts. But the atmosphere was relaxed during the 90-minute commemoration held on a sunny morning in Hagley Park.

The service was broadcast around the country. Muslim volunteers, some of whom had traveled from Australia and Asia, handed out pamphlets with information about Islam as crowds left the park after the service.

There were other smaller services around New Zealand, including one at Auckland's Eden Park attended by All Blacks rugby star and Muslim convert Sonny Bill Williams.