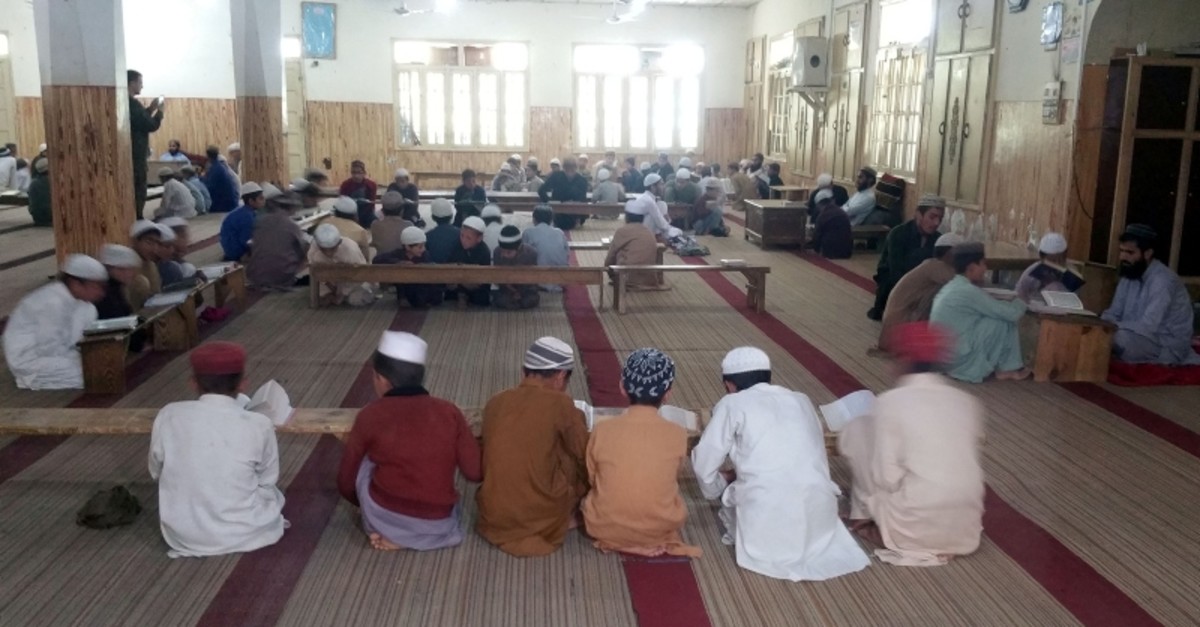 Students recite verses from the Quran at a madrasa situated near an impact site, after Indian military aircraft struck on Feb. 26, according to Pakistani officials, in Jaba village, near Balakot, Pakistan, April 10, 2019. (Reuters Photo)
by Compiled from Wire Services Apr 11, 2019 4:21 pm

Pakistan has escorted a group of foreign journalists and diplomats to the site of an Indian air strike near a madrasa, or Islamic school, on a remote hilltop in the northeast, to show that, contrary to Delhi's claims, no infrastructure was damaged, the military spokesman said.

The visiting group, which Major General Asif Ghafoor said was mostly based in Delhi, was shown observing a crater in Balakot in video published via Twitter late Wednesday, on the eve of India's massive election.

The group saw the "ground realities" of the strike site, Ghafoor said in a caption accompanying the tweet.

Indian Prime Minister Narendra Modi has campaigned hard on what he claims is the success of the February 26 strike. Indian officials have claimed up to 250 militants were killed.

Reuters reported that the group, which included journalists and diplomats mostly based in Islamabad, didn't get enough time to make any kind of informed assessment about whether the madrasa, one of more than 30,000 across Pakistan where children of all ages are taught to memorize and recite the Quran, was a cover for Jaish-e-Mohammed (JeM) militant group, which was allegedly using the site to train fighters to infiltrate Indian-controlled Kashmir.

JeM claimed responsibility for a suicide car bomb attack in Kashmir that killed 40 Indian paramilitary police on Feb 14, triggering the Indian attack and the worst hostilities between the two nuclear-armed nations for many years.

The report said they were mostly restricted to looking around the madrasa's main building, which is located in the Jaba village area near the town of Balakot. "They were hurried away by the army, which organized the trip, after less than half an hour. Those arriving by vehicle had even less time," it said.

Ghafoor denied that the madrasa had recently been used by JeM, according to the report. "If there was a relationship it was a long time ago, he suggested."

"Those visiting the site on Wednesday didn't see any signs that there had been significant building work to either clear structures or erect new ones. And the vegetation didn't appear to have suffered the stress that might be expected from a missile attack," it added.

"The main madrasa building itself doesn't appear to be reinforced in any major way - it has a metal roof with some modest wooden beams."

Pakistan has denied from the start that there was any damage or casualties, with Modi's counterpart Imran Khan framing it as an election ploy.

With the first phase of polls in India's massive election opening Thursday, Modi has styled himself as India's "chowkidar" ("watchman"), and anyone even questioning the action against Pakistan is given short shrift.

But independent reporting by multiple local and international outlets who have visited the site found no evidence of a major terrorist training camp -- or of any infrastructure damage at all, according to AFP.

The Atlantic Council's Digital Forensic Research Lab said that open-source satellite imagery indicated "only impacts in the wooded area, with no damage being visible to the surrounding structures."

The strike was in retaliation to a suicide bombing in Indian-held Kashmir on February 14 that was claimed by a Pakistan-based militant group.

It was followed by Pakistani air strikes which hit open space in Indian territory and ignited a dogfight in the skies over the disputed region of Kashmir, the worst confrontation between the nuclear-armed foes in years.

Pakistan said it shot down two Indian war planes, with one falling on the Indian side of the de facto Kashmir border. It captured the pilot of the other, releasing him days later in a bid to defuse tensions.

India says just one of its planes was shot down, and claimed that the second plane was a Pakistani F-16 shot down by the Indian air force.

Pakistan has denied that claim also, and Foreign Policy has reported that the US had done a count of all Pakistan's F-16s, with none missing.

Kashmir has been divided between India and Pakistan since the end of British colonial rule in 1947.

Both claim the Himalayan territory in full and have fought two wars over it.