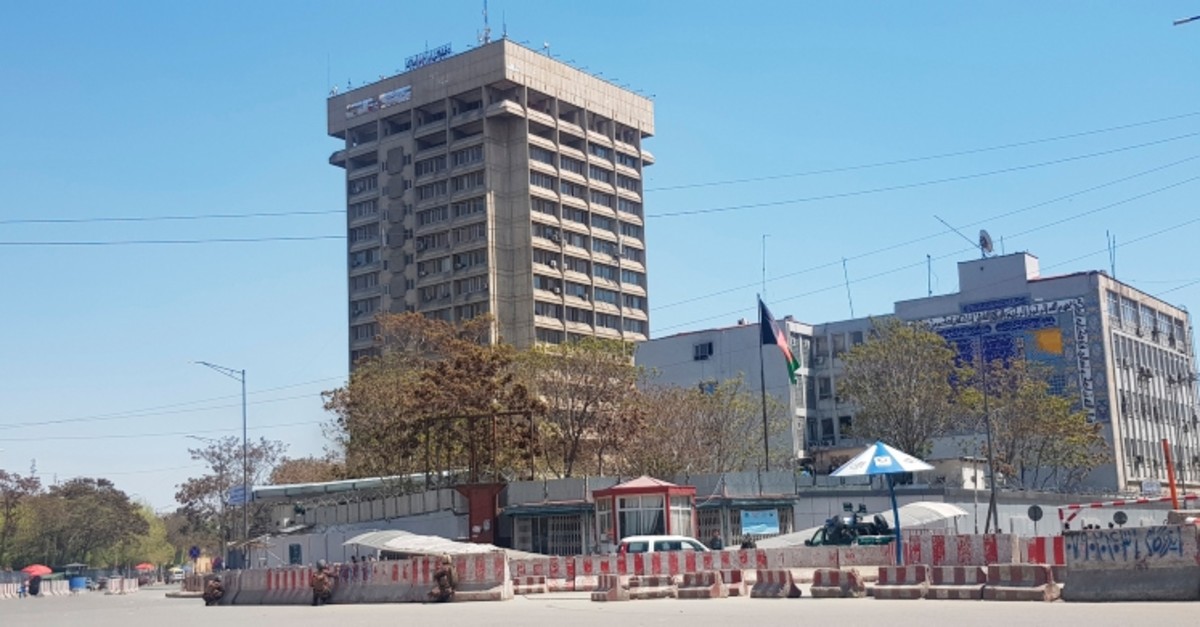 Security personnel take positions on the perimeter outside the Telecommunication Ministry during a gunfight with insurgents in Kabul, Afghanistan, Saturday, April 20, 2019. (AP Photo)
by Compiled from Wire Services Apr 20, 2019 11:17 am

Police chief Gen. Sayed Mohammad Roshandil said that the bomber blew himself up outside the telecommunications ministry, clearing the way for the other attackers to enter the building and the heavily guarded government compound in central Kabul.

No one immediately claimed responsibility for the attack. Both Taliban insurgents and the Daesh terror group are active in eastern Afghanistan and have previously claimed attacks in Kabul.

The attack comes a day after Afghan-to-Afghan peace talks in Qatar were canceled. It would have marked the first time that Taliban and Kabul government officials sat together to negotiate an end to the war in Afghanistan and a withdrawal of U.S. troops.

Nasart Rahimi, a spokesman for the interior ministry, said security forces were locked in an ongoing siege. He added that they had shot and killed two further suicide bombers, before the attackers could reach their target of the nearby central post office.

"The area is surrounded by the Afghan security forces and a gun battle is going on with unknown number of attackers," Rahimi said.

Wahidullah Mayar, spokesman for the public health ministry, said that so far six wounded people have been evacuated to hospitals. There are three women among the wounded, he added.

Live footage from local TV shows government employees fleeing the neighboring information and culture ministry buildings, with some climbing out through the windows.

Security forces have blocked all roads accessing the site.

The telecommunications ministry is located in downtown Kabul, about 2 kilometers (1.25 miles) from the green zone.

The explosion was also close to the heavily fortified Serena Hotel, one of the very few hotels still used by foreign visitors, in one of the main commercial areas of the city.

While heavy fighting has carried on across Afghanistan and Taliban militants have announced their now customary spring offensive, there have been no large scale attacks on civilian targets in Kabul in recent weeks.