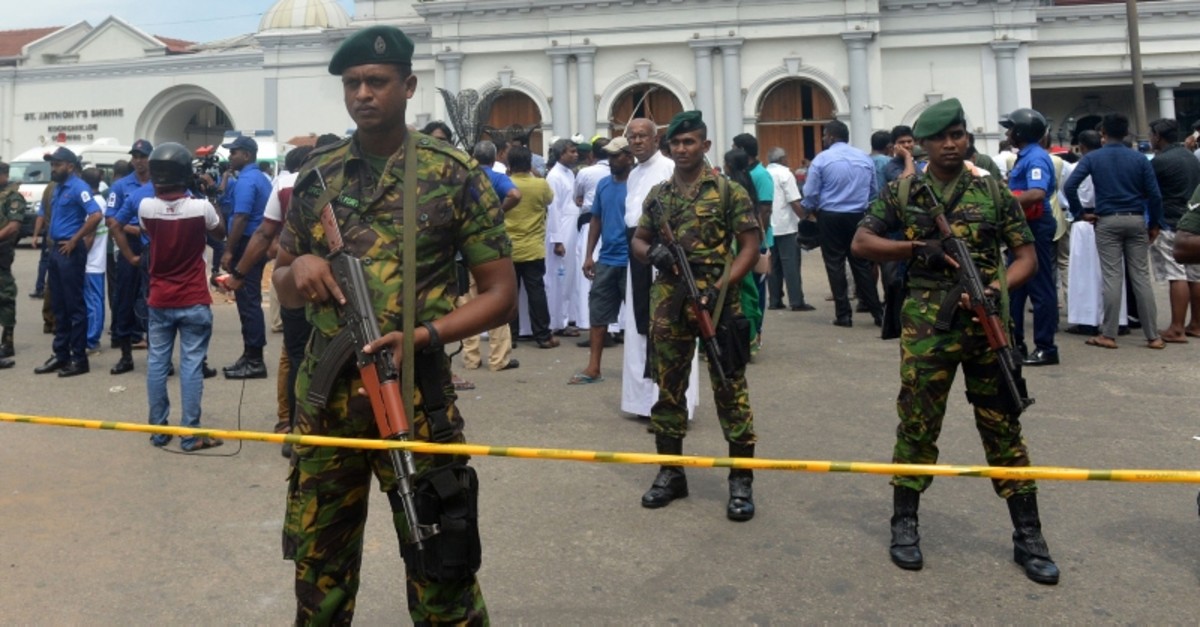 World leaders have condemned a series of blasts in Sri Lanka that killed more than 290 people on Sunday, including dozens of foreigners -- with British, Dutch and American citizens believed to be among them.

Hospital sources also said Japanese citizens were among those injured by the bombs which ripped through high-end hotels and churches holding Easter services.

Indian Prime Minister Narendra Modi also denounced the deadly blasts, saying: "There is no place for such barbarism in our region. India stands in solidarity with the people of Sri Lanka. My thoughts are with the bereaved families and prayers with the injured."

Afghan President Ashraf Ghani also condemned the attacks and said: "Attacking churches and hotels and targeting worshipers is appalling, and Afghanistan strongly condemns this heinous act of terror. Our thoughts and prayers go out to the victims and their families, and we stand in solidarity with Sri Lanka on this dark day."

In a Twitter statement, the spokesman of German Chancellor Angela Merkel, Steffen Seibert, said they were "horrified by the news that Christians in Sri Lanka were attacked and killed during Easter services."

"Heartfelt condolences from the people of the United States to the people of Sri Lanka on the horrible terrorist attacks on churches and hotels," he tweeted. "We stand ready to help!"

The U.S. leader erroneously wrote that "138 million people" were killed in the attacks.

German Chancellor Angela Merkel on Sunday condemned a wave of bombings against Sri Lankan churches and tourist spots, urging that the "religious hate and intolerance that have showed themselves in such a terrible way today must not win".

"It is shocking that people who gathered to celebrate Easter together were consciously targeted in this malicious attack," Merkel said in a condolence telegram published by a spokeswoman on Twitter.

"We strongly condemn these odious acts," he wrote on Twitter. "Full solidarity with the Sri Lanka people and our thoughts for all those close to the victims this Easter."

Russian President Vladimir Putin, in a statement, offered his "sincerest condolences in connection with the tragic consequences of the series of terrorist attacks" in Sri Lanka, according to Russian state-run agency Tass.

Underlining that Moscow remained as a reliable partner of Sri Lanka in its fight against international terrorism, he said: "I expect that the perpetrators and masterminds of this cruel and cynical crime, committed at the height of Easter celebrations, will incur a deserved punishment."

"Terribly saddened by terrorist attacks on Sri Lankan worshippers during Easter. Condolences to friendly govt & people of Sri Lanka. Our thoughts & prayers with the victims & their families," Zarif said on Twitter.

"Terrorism is a global menace with no religion: it must be condemned & confronted globally," he added.

"The acts of violence against churches and hotels in Sri Lanka are truly appalling, and my deepest sympathies go out to all of those affected at this tragic time," she tweeted.

"We must stand together to make sure that no one should ever have to practise their faith in fear."

"Thoughts are with the victims and their relatives."

Prime Minister Scott Morrison said Australia was thinking of those killed in a "horrific terrorist attack".

"To the beautiful people of Sri Lanka, Australia sends its heartfelt sympathies and our prayers and our support -- and our offer to do whatever we can to support you in this terrible time of need," he said in a statement.

"At this time as Easter Sunday draws to a conclusion here in Australia, our heart goes out to those Christians and all of those other innocents who have been slaughtered today in this horrific terrorist attack."

A month after dozens of Muslims were killed in a shooting at two mosques in Christchurch, New Zealand Prime Minister Jacinda Ardern described the attack as "devastating".

"New Zealand condemns all acts of terrorism, and our resolve has only been strengthened by the attack on our soil on the 15th of March. To see an attack in Sri Lanka while people were in churches and at hotels is devastating.

"New Zealand rejects all forms of extremism and stands for freedom of religion and the right to worship safely. Collectively we must find the will and the answers to end such violence."

The Catholic Church in Jerusalem said the blasts were particularly sad as they "came while Christians celebrate Easter".

"We pray for the souls of the victims and ask for speedy recovery of the injured, and ask God to inspire the terrorists to repent of their killing and intimidation," the statement said.

"We also express our solidarity with Sri Lanka and all its inhabitants in their various religious and ethnic backgrounds."