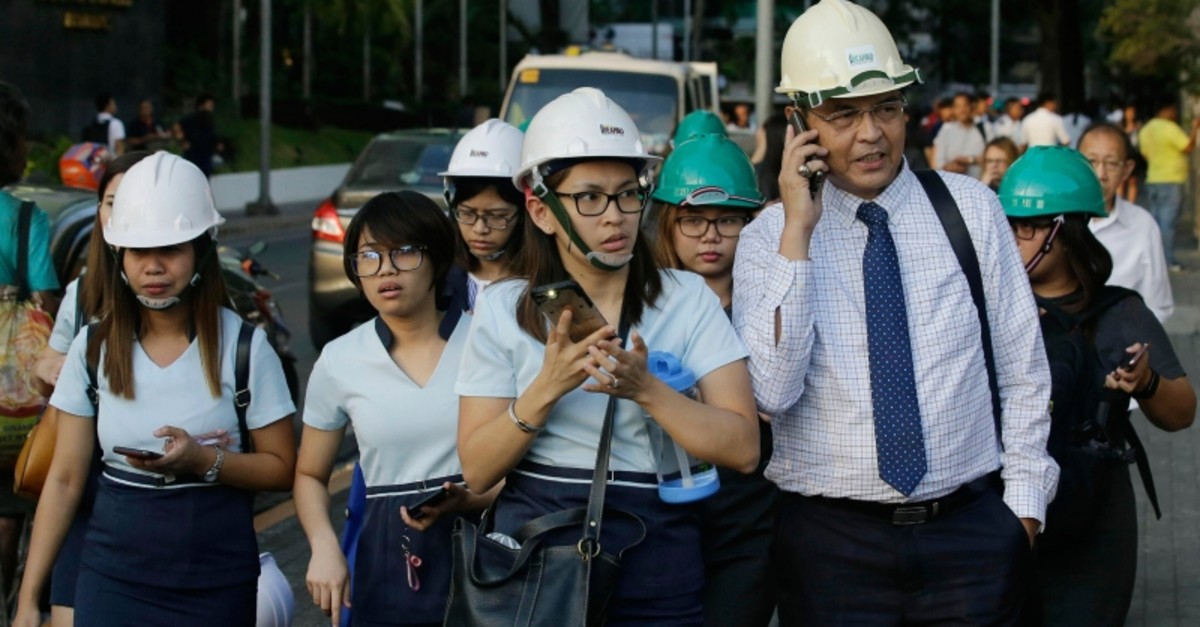 At least five people were killed when buildings collapsed near Manila after a powerful earthquake set skyscrapers swaying and drove terrified locals into the street.

Rescuers in one area were using heavy equipment and their bare hands to hunt for survivors in the rubble left by the strongest quake to strike close to the densely populated Philippine capital in years.

Three bodies were pulled out of a shopping mall in the town of Porac, while a woman and her grandchild were crushed to death in the town of Lubao, said Lilia Pineda, governor of Pampanga province northwest of Manila.

"We believe there are still people trapped in the four-story building," Pineda said referring to the shopping mall, adding that up to eight people could be dead.

"Our rescuers are telling us there are people in there shouting, begging to be rescued."

Rescuers, working under floodlights, pried at the flattened structure with a crane in the disaster-prone nation.

"It's difficult because there is no power, so we're still trying to get hold of a generator to be able to rescue the people inside," the governor added.

"The Pampanga region took a direct hit," civil defense spokesman Edgar Posadas told reporters, with a 17th-century Catholic church, an airport and a toll road in the area all reporting damage, while a landslide struck another town.

The quake that rumbled across the northern Philippines also caused skyscrapers to sway, as they are designed to do, in Manila.

Thousands of travelers were stranded after aviation authorities shut down the secondary Clark Airport, which is located on the site of the former U.S. military installation that lies about an hour's drive north of the capital.

"The damage is quite substantial," Clark airport president Jaime Mezo said after photos emerged of a heavily damaged terminal.

Residents posted photos on social of media showing a collapsed ceiling and light fixtures swinging in the moments after the quake.

Manila office workers rushed into the streets as emergency alarms blared, and police said dozens were injured due to falling debris or building collapses.

Feliza Villanueva, 21, a business process outsourcing employee told AFP she and four colleagues were at work when the quake struck.

"This was the second strongest quake I've felt in my entire life," she told AFP as she joined hundreds of others in the courtyard of an office building, waiting for the all clear.

"We were worried but we did not panic," she said.

"We planned how to evacuate the building. There were too many people going down the stairs, so we waited for our turn. People looked in shock, but no one was shouting or anything like that," she said.

The quake was centered on the town of Castillejos, about 100 kilometers (62 miles) northwest of Manila, local geologists said.

Scientists from the U.S. Geological Survey logged its magnitude at 6.3, and said its epicenter was 40 kilometers below the Earth's surface.

Dani Justo, a martial arts instructor, told AFP she was at her southern Manila home when the quake struck.

"The clothes hanging on our line were really swaying. My Shih Tzu (dog) dropped flat on the ground," she added.

The Philippines is part of the Pacific "Ring of Fire," an arc of intense seismic activity that stretches from quake-prone Japan through Southeast Asia and across the Pacific basin.