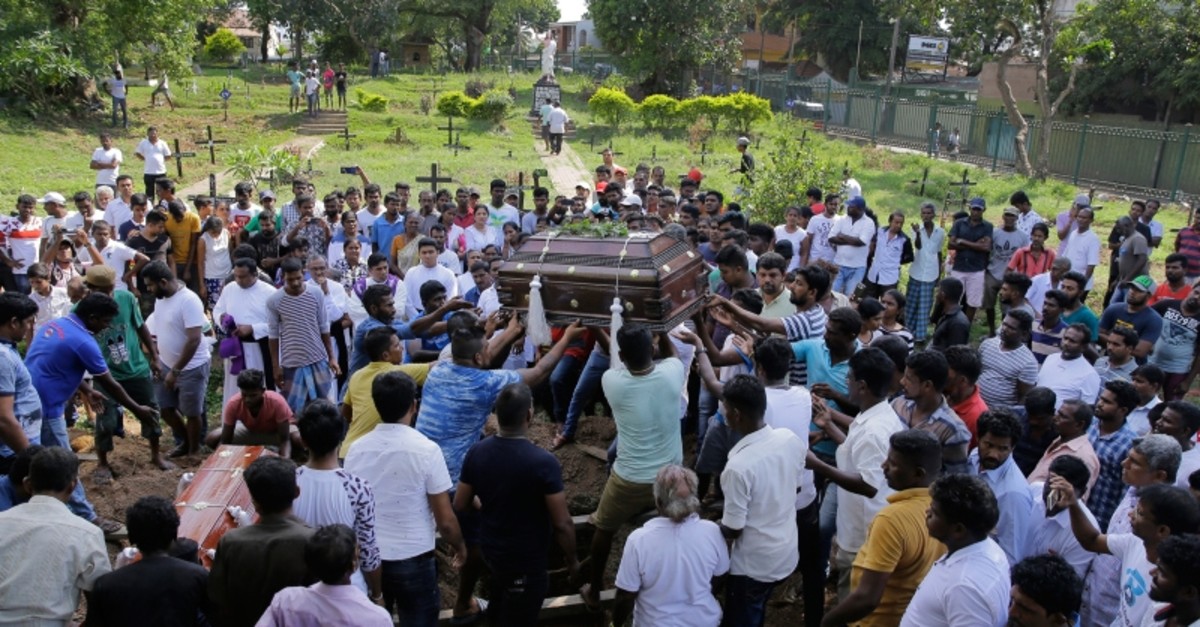 Sri Lankans prepare to bury the coffins carrying remains of Berington Joseph, left, and Burlington Bevon, who were killed in the Easter Sunday bombings in Colombo, Sri Lanka, Tuesday, April 23, 2019. (AP Photo)
by Compiled from Wire Services Apr 23, 2019 11:36 am

"Those that carried out the attack that targeted members of the U.S.-led coalition and Christians in Sri Lanka the day before yesterday are Islamic State group fighters," said the statement, using an alternative for Daesh.

In a subsequent longer official statement, the group gave aliases but not the full names of seven attackers it said were involved. The terror group also later released a photo of a man Sri Lanka says led the coordinated attacks.

Sri Lankan police detained a Syrian among 40 people being questioned about the Easter Sunday attacks on churches and hotels, government and military sources said on Tuesday, as the toll from the coordinated bomb attacks rose to 321.

No group has claimed responsibility for the attacks, which officials said were carried out by at least seven suicide bombers on three churches and four hotels. About 500 people were also wounded.

However, the focus of suspicion is falling on a local terrorist group with links to foreign groups. U.S. intelligence sources said the attacks bore some of the hallmarks of the Daesh terrorist group.

Warnings about growing radicalism in this island nation off the coast of India date to at least 2007, while Muslim leaders say their repeated warnings about the group and its leader drew no visible reaction from officials responsible for public security.

"It was basically a hate campaign against all non-Muslims," said Hilmy Ahamed, the Muslim council's vice president. "Basically, he was saying non-Muslims have to be eliminated."

Zahran's name was on one intelligence warning shared among Sri Lankan security forces, who apparently even quietly took their growing concerns to international experts as well.

An initial probe into the attacks has shown it was "retaliation for Christchurch," the country's deputy defense minister said Tuesday.

"The preliminary investigations have revealed that what happened in Sri Lanka (on Sunday) was in retaliation for the attack against Muslims in Christchurch," state Minister of Defense Ruwan Wijewardene told parliament.

Fifty people were killed in shooting attacks on two mosques in the New Zealand city of Christchurch on March 15.

Tuesday was declared a national day of mourning and the funerals of some of the victims were held as pressure mounted on the government over why effective action had not been taken in response to a warning this month about a possible attack on churches by the little-known domestic terrorist group.

Police said the number of people arrested since Sunday had risen to 40, most of them Sri Lankans. The investigation of those detainees had led to the Syrian, three government and military sources told Reuters.

"He was arrested after the interrogation of local suspects," one of the sources said.

The first six attacks – on three churches and three luxury hotels – came within 20 minutes on Sunday morning during Easter services and as hotels served breakfast.

Two more explosions – at a down-market hotel and a house in a suburb of the capital, Colombo – came in the early afternoon.

Most of the dead and wounded were Sri Lankans, although government officials said 38 foreigners were killed. That included Turkish, British, U.S., Australian, Indian, Chinese, Danish, Dutch and Portuguese nationals.

"The total now is 45 children who died," UNICEF spokesman Christophe Boulierac told reporters in Geneva, stressing that others "are wounded and are now fighting for their lives," meaning the toll among minors from the Sunday attacks could rise.

The bombs brought a shattering end to a relative calm that had existed in the Buddhist-majority Indian Ocean island since a bitter civil war fought by Tamil separatists ended 10 years ago and raised fears of a return to sectarian violence.

Sri Lanka's 22 million people include minority Christians, Muslims and Hindus. Up to now, Christians had largely managed to keep out of the worst of the island's conflict and communal tensions.

The government imposed an emergency law at midnight on Monday, giving police extensive powers to detain and interrogate suspects without court orders.

An overnight curfew has also been imposed since Sunday.

The Washington Post quoted an unidentified law enforcement official as saying Federal Bureau of Investigation (FBI) agents were being sent to Sri Lanka to assist in the investigation.

The FBI has also offered laboratory expertise to test evidence and analysts were scouring databases for information that might shed light on the attacks, the Post said. Counter-terrorism officials from Britain were also due to arrive on Tuesday, a Western diplomat in Colombo said.

U.S. intelligence sources said the attacks carried some of the hallmarks of the Daesh terrorist group, although they were cautious because it had not claimed responsibility.

Daesh is usually quick to claim responsibility for, or links to, attacks against foreign targets or religious groups whether they were involved or not.

Footage on CNN showed what it said was one of the bombers wearing a heavy backpack. The man patted a child on the head before entering the Gothic-style St. Sebastian church in Katuwapitiya, north of Colombo. Dozens were killed there.

The attacks have also underlined concern over fractures in Sri Lanka's government, and whether the discord prevented action that might have stopped them.

The government got a tip-off from India this month about a possible attack on churches by a little-known domestic terrorist group, the National Thowfeek Jamaath group.

It was not immediately clear what action, if any, was taken in response. A government minister said on Monday Wickremesinghe had not been informed about the warning and had been shut out of top security meetings because of a feud with President Maithripala Sirisena.

Sirisena fired Wickremesinghe last year only to be forced to reinstate him under pressure from the Supreme Court. Their relationship is reported to be fraught.

China's embassy in Sri Lanka warned Chinese nationals against traveling to Sri Lanka in the near term because of "huge security risks."

China is a major investor in Sri Lanka. The embassy said one Chinese national was killed, five wounded and five were missing.

Among the victims were three of the four children of Anders Holch Povlsen, Denmark's richest man.

Eight Britons were also killed, including Anita Nicholson, her 14-year-old son and her 11-year-old daughter. Nicholson's husband survived the attack on the Shangri-La Hotel in Colombo.