North Korea's Kim arrives in Russia ahead of summit with Putin 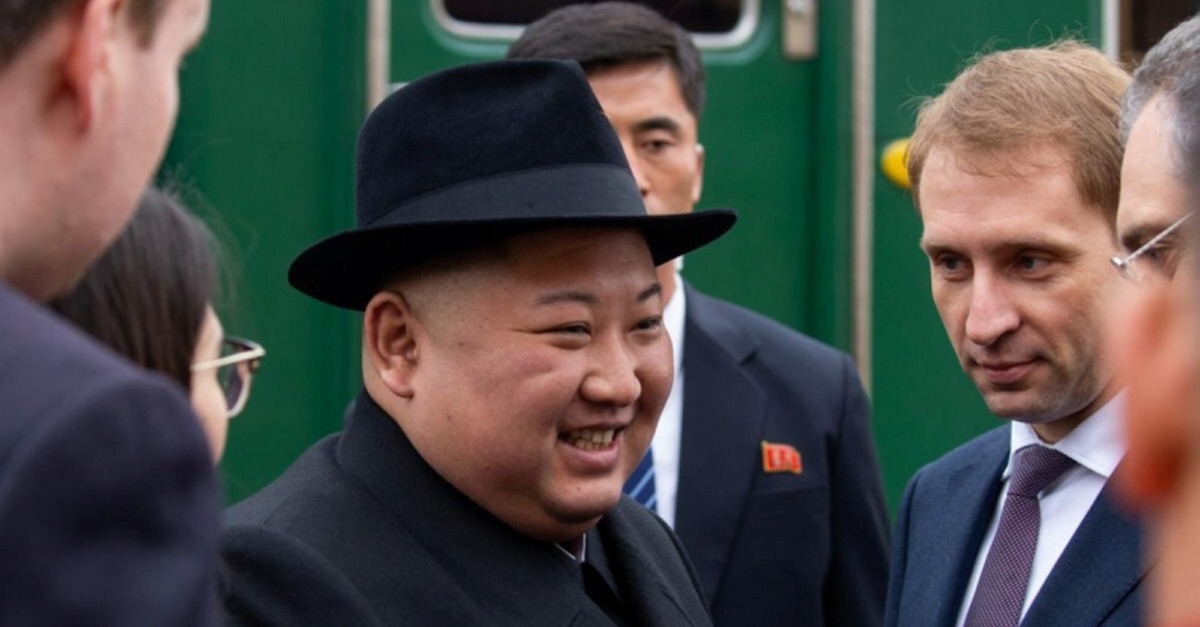 North Korean leader Kim Jong Un arrived in Russia by train on Wednesday, a day before his much-anticipated summit with President Vladimir Putin that comes amid deadlocked diplomacy on his nuclear program.

South Korea's Yonhap news agency published photos of Kim, dressed in a black coat and a fedora, meeting with Russian officials at Russia's Hasan train station near its border with the North. Russian news agency Tass quoted a local official as saying Kim was given flowers, bread and salt at the station.

Kim was traveling to the Pacific port city of Vladivostok for a summit with Putin on Thursday. He became the first North Korean leader to travel to Russia since his late father, Kim Jong Il, visited in 2011.

Earlier Wednesday, the North's state media confirmed Kim's departure aboard his khaki-green armored train from an undisclosed location in North Korea. Yonhap, citing an analysis of North Korean photos on Kim's departure, speculated Kim may have left from a rural area, not Pyongyang.

Kim was expected to arrive in Vladivostok around late Wednesday afternoon and attend a dinner reception hosted by Russian Deputy Prime Minister Yury Trutnev, according to South Korean media. After his summit with Putin, Kim may tour neighboring facilities or landmarks before departing for home on Friday, the reports said.

In February, Kim's second summit with Trump in Hanoi ended without any agreement because of disputes over U.S.-led sanctions. There have since been no publicly known high-level contacts between the U.S. and North Korea, though both sides say they are still open to a third summit.

Kim wants the U.S. to ease the sanctions to reciprocate some partial disarmament steps he took last year. But the U.S. maintains the sanctions will stay in place until North Korea takes more significant denuclearization steps.

Some experts say Kim could try to bolster his country's ties with Russia and China. Others say it's not clear how big of a role Russia can play in efforts to restart the nuclear negotiations. The summit could allow Putin to try to increase his influence in regional politics and the standoff over North Korea's nuclear program.

"Kim wants to show that he's cooperating with Russia too, rather than looking to only the U.S. and China. But I think it's not easy for Russia and China to provide North Korea with practical assistance that leads to the inflow of dollars," said Chon Hyun-joon, a former senior researcher at the Korea Institute for National Unification in Seoul.

North Korea has increasingly expressed frustration at the deadlocked negotiations. Last week, North Korea launched a blistering attack on U.S. Secretary of State Mike Pompeo, insisting he be removed from the negotiations just hours after announcing it had carried out a new weapons test.

Moscow has already called for the sanctions to be eased, while the U.S. has accused it of trying to help Pyongyang evade some of the measures — accusations Russia denies.

Putin's adviser added that the Kremlin would try to help "create preconditions and a favorable atmosphere for reaching solid agreements on the problem of the Korean Peninsula," Ushakov said.

Ushakov pointed at a Russia-China roadmap that offered a step-by-step approach to solving the nuclear standoff and called for sanctions relief and security guarantees to Pyongyang. He noted that the North's moratorium on nuclear tests and scaling down of U.S.-South Korean military drills helped reduce tensions and created conditions for further progress.

Ushakov said that Putin-Kim summit's agenda will also include bilateral cooperation. He added that Russia's trade with North Korea is minuscule at just $34 million last year, mostly because of the international sanctions against Pyongyang.

Russia would like to gain broader access to North Korea's mineral resources, including rare metals. Pyongyang, for its part, covets Russia's electricity supplies and investment to modernize its dilapidated Soviet-built industrial plants, railways and other infrastructure.

In the meantime, Vladivostok has been seeing a number of unusually strict security measures. Maritime authorities said that the waters around Russky Island, off the southern tip of Vladivostok, would be temporarily closed to all maritime traffic.

The island has a university with a conference hall and is seen as a likely summit venue.

Separately, local media reported that some platforms at Vladivostok's main train station would be closed for several days, and that buses will be rerouted from the train station Wednesday. News website Vl.ru reported on road construction to even out the entrance at the train station, possibly to allow Kim's limousine to drive straight off the platform.

Moscow was a crucial backer of Pyongyang for decades and their ties go back to the founding of North Korea, when the Soviet Union installed Kim's grandfather Kim Il Sung as leader.

But their relations have often shifted between hot and cold and during the Cold War, Kim Il Sung was adept at exploiting the Communist rivalry between Beijing and Moscow to extract concessions from both.

The Soviet Union reduced funding to the North as it began to seek reconciliation with Seoul in the 1980s, but Pyongyang was hit hard by its demise in 1991.

Soon after his first election as Russian president, Putin sought to normalize relations and met Kim Jong Il — the current leader's father and predecessor — three times, the first of those meetings in Pyongyang in 2000, when he became the first Russian leader to visit the North.

China has since cemented its role as the isolated North's most important ally, its largest trading partner and crucial fuel supplier, and analysts say Kim could be looking to balance Beijing's influence.

While ties between Russia and the North have remained cordial, the last meeting between their leaders came in 2011, when Kim Jong Il told then-president Dmitry Medvedev that he was prepared to renounce nuclear testing.

His son has since overseen by far the country's most powerful blast to date, and the launch of missiles capable of reaching the entire U.S. mainland.