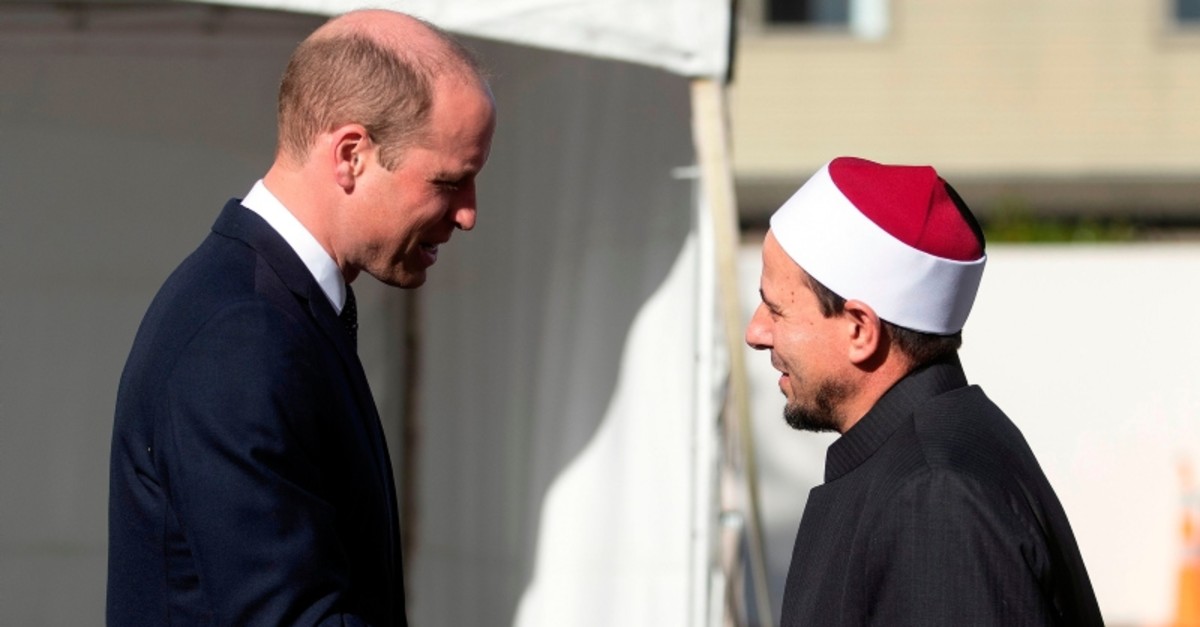 Britain's Prince William on Friday visited the two mosques where a gunman last month killed 50 people and said the white supremacist terrorist accused of the massacre had failed in his mission to spread hate.

The Duke of Cambridge spoke to about 160 people at the Al Noor mosque in Christchurch in southern New Zealand, including survivors of the shootings, Muslim leaders and Prime Minister Jacinda Ardern.

"Tragedy unfolded in this room. A terrorist attempted to sow division and hatred in a place that stands for togetherness and selflessness," the prince said. "He thought he could redefine what this place was. I'm here to help you show the world that he failed."

The prince said he'd been visiting New Zealand since before he could walk, and he'd always been impressed by the way New Zealanders looked out to the world with optimism.

"I could not believe the news that I was hearing on the 15th of March, in a country that seemed to be bucking the global trends of division and anger," William said.

But New Zealand didn't fall victim to fear and distrust as the terrorist wanted, William said.

William did not name the accused gunman, a practice Ardern and others have followed in an attempt to deny him notoriety. She and Imam Gamal Fouda accompanied the prince during the mosque visit.

Ardern told reporters it was significant that such an important member of the royal family had cancelled other engagements and come to New Zealand personally to pay his respects.

William also visited the Linwood mosque and met with some of those recovering from gunshot wounds at Christchurch Hospital. As well as the 50 who died in the attacks, another 50 were wounded.

Hinting at the loss of his own mother, Princess Diana, the prince referred to having to deal with his own grief. "What I realize is that of course, grief can change your outlook, you don't ever forget the shock, the sadness and the pain. But I do not believe that grief changes who you are," he said. Praising citizens for standing together in a moment of pain, he added that the grief can reveal depths and burst bubbles of complacency and help to live up to the values.

Earlier, the prince met 4-year-old Alen Alsati -- who was injured in the attack and woke from a coma earlier this week -- and her father, Wasseim at Starship Children's Hospital., who were both injured on March 15.

In a touching video released by Kensington Palace, Alen, who only woke from a coma early this week, asked William: "Do you have a daughter?,"

"Do I have a daughter? Yes, she's called Charlotte... she's about the same age as you," William replied.

The prince also laid a wreath at the Oi Manawa Canterbury Earthquake National Memorial built to commemorate the 185 people in Christchurch who died in a 2011 earthquake and go for a walkabout where the public is invited to meet him.

William travelled to New Zealand on behalf of the Queen, who is considered as the head of state in that country.

The prince was on a two-day trip to New Zealand. On Thursday, he met with police officers and medics who responded to the attacks. He also attended a service in Auckland to mark Anzac Day -- a day of remembrance in Australia and New Zealand -- to commemorate those who died in all wars -- including the Gallipoli Campaign in the World War I --, conflicts, and peacekeeping operations.