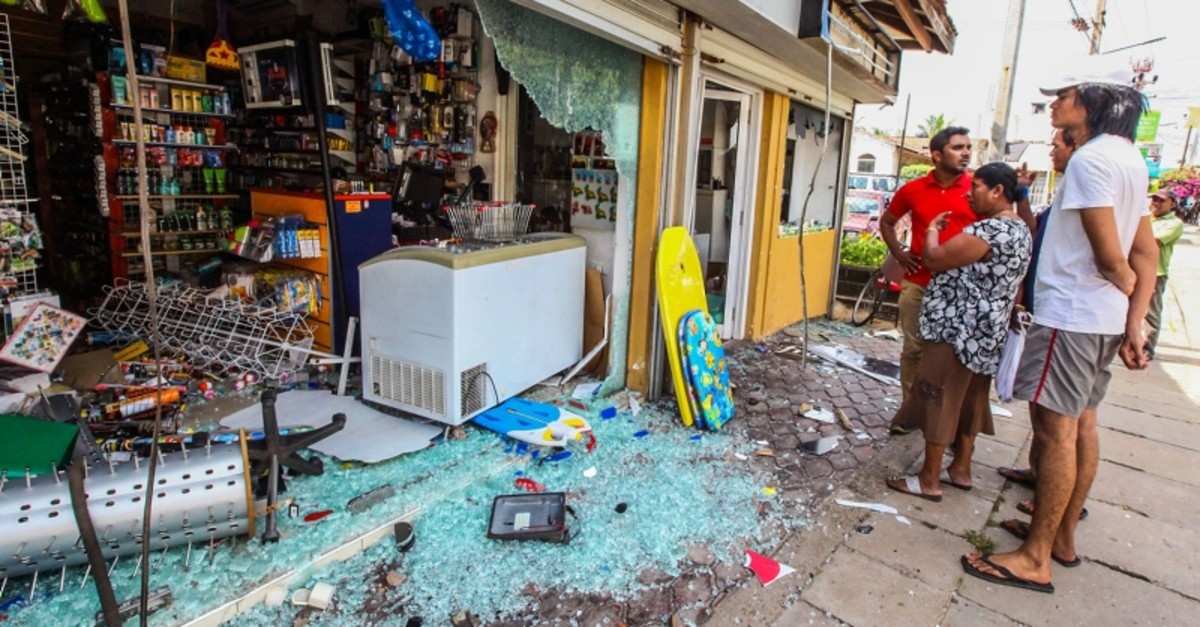 Two weeks after the deadly terrorist attack in Sri Lanka, fears are growing with ethnic clashes targeting Muslims; on Sunday groups of mostly Catholic attackers vandalized shops that were largely owned by Muslims

Sri Lankan police arrested two people after mobs attacked Muslim-owned shops in one of the towns where a Catholic church was targeted in multiple suicide bombings in April that killed more than 250, according to local media reports.

Hundreds of security forces entered Negombo, north of Colombo, to impose a curfew Sunday night after dozens of Muslim-owned shops, homes and vehicles were attacked by Catholics.

The curfew was lifted early Monday. Local media cited police spokesman Ruwan Gunasekara as saying that the violence was brought under control.

Reports also cited locals saying attackers burned a three-wheeler taxi and a motorbike while a gem-seller said about 400 people stoned his shop.

Military spokesman Sumith Atapattu said Sunday several people had been injured in clashes in the town.

St. Sebastian's church in the town 40 kilometers (25 miles) north of capital Colombo was one of three churches and three hotels hit by suicide bombers on April 21, killing 257 people.

"I appeal to all Catholic and Christian brothers and sisters not to hurt even a single Muslim person because they are our brothers, because they are part of our religious culture," said Cardinal Malcolm Ranjith, archbishop of Colombo.

"Therefore please avoid hurting them and try to create a better spirit of understanding and good relations between all the communities of Sri Lanka," he said in a video message to the country.

The cardinal visited Negombo, held talks with clerics at a mosque and appealed to the government to shut bars in the Catholic-dominated town known as "Little Rome," said his spokesman Father Edmund Tilakaratne.

"As a temporary measure, the cardinal asked the government to order the ban on liquor sales in Negombo area," Tilakaratne told AFP.

In another televised appeal, Ranjith appealed to Christians, Buddhists and Muslims to show restraint.

Negombo suffered the highest death toll in the Easter Sunday attacks that were claimed by the Daesh terror group. The bomb at St. Sebastian's killed more than 100 worshippers.

A top police officer said two arrests were made after the latest clashes and more suspects had been identified through CCTV footage.

The officer said all will be prosecuted under emergency laws approved after the Easter attacks.

"At least three people were injured in the clashes," the officer told AFP. "Although we have arrested only two suspects at the moment, many more have been identified and we will go after them."

Prime Minister Ranil Wickremesinghe said in a statement the government will compensate those who lost property in the night-time clashes.

Security forces are on high alert after intelligence reports indicated militants could strike during the Islamic holy month of Ramadan, which began Monday. A brief ban on social media platforms imposed during the clash was lifted, but authorities said they would stay alert for threats against Muslims.

Security remained tight across the country as state schools resumed classes yesterday, but many anxious parents kept their children at home. Mid-to-upper stream classes resumed yesterday, a day after soldiers conducted a security sweep of schools. Lower grades are expected to resume on May 13. Despite the tight security and military patrols, most classrooms were nearly empty. Private schools, including Catholic institutions, remained closed.

Muslims make up around 10% of Buddhist-majority Sri Lanka's 21 million population and Christians about 7.6%.

Most of the country's Muslims live in the east and center of the island. Mosques and Muslim-owned properties in the country have been widely attacked, especially by Sinhalese Buddhists. Some Buddhist nationalists have protested against the presence in Sri Lanka of Muslim Rohingya asylum-seekers from mostly Buddhist Myanmar, where Buddhist nationalism has also been on the rise.

Muslim communities across the world have suffered numerous hate attacks over the past years with many blaming the surge on anti-Muslim discourse in the media and supported by the politicians.

The Christchurch mosque terror attacks became the latest example of growing far-right terrorism, a well-known global threat. Extremist politics, including extreme nationalist and white supremacist politics that appear to be at the core of the latest terror attack on Muslims in New Zealand, have been part of daily politics for a long time.

The rise of global extremism, with the flourishing of the right in Europe and U.S. President Donald Trump and the alt-right in America, has emboldened potential terrorists.