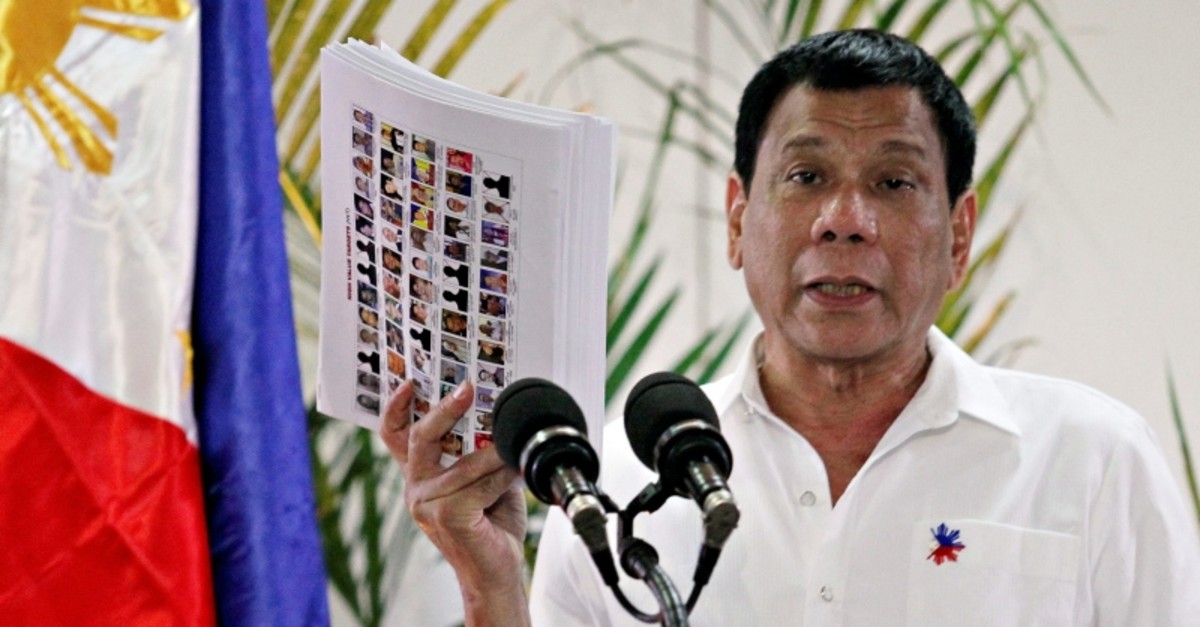 Duterte shows the list of government, military and police officials involved in illegal drug trade during a news conference in Davao city, Philippines October 27, 2016. (REUTERS Photo)
by Compiled from Wire Services May 09, 2019 1:40 pm

A large cockroach was seen crawling on Philippine President Rodrigo Duterte's shirt during a speech at a campaign rally, prompting critics to poke fun at the abrasive leader on social media.

Duterte was extolling the credentials of his senatorial candidates when the insect landed on his left shoulder during his speech on Wednesday night in the town of Garcia Hernandez, 653 kilometers south of Manila.

An aide rushed to his side to try to remove the roach with a folder, but the insect crawled across Duterte's shirt.

An unfazed Duterte swatted the cockroach and joked that the opposition was behind it, saying, "It's the Liberal [party]. That's for sure."

Social media users quipped that the cockroach must have been naturally attracted to Duterte, since the animals are often seen crawling in rubbish.

"The cockroach must have realized that Duterte is the trashiest trash it has ever seen," one tweet read. Another said, "Maybe the cockroach just smells where the trash is."

"And I never thought I would say this but GOOD JOB EXPOSING THAT TRASH, DEAR COCKROACH," @keeyaaraaa posted.

One tweet said the cockroach "actually panicked when it realised it was Duterte."

Duterte is on the campaign trail to rally support for his candidates in next week's midterm polls, in which some 18,000 seats ranging from local councils to the upper house Senate are up for grabs.