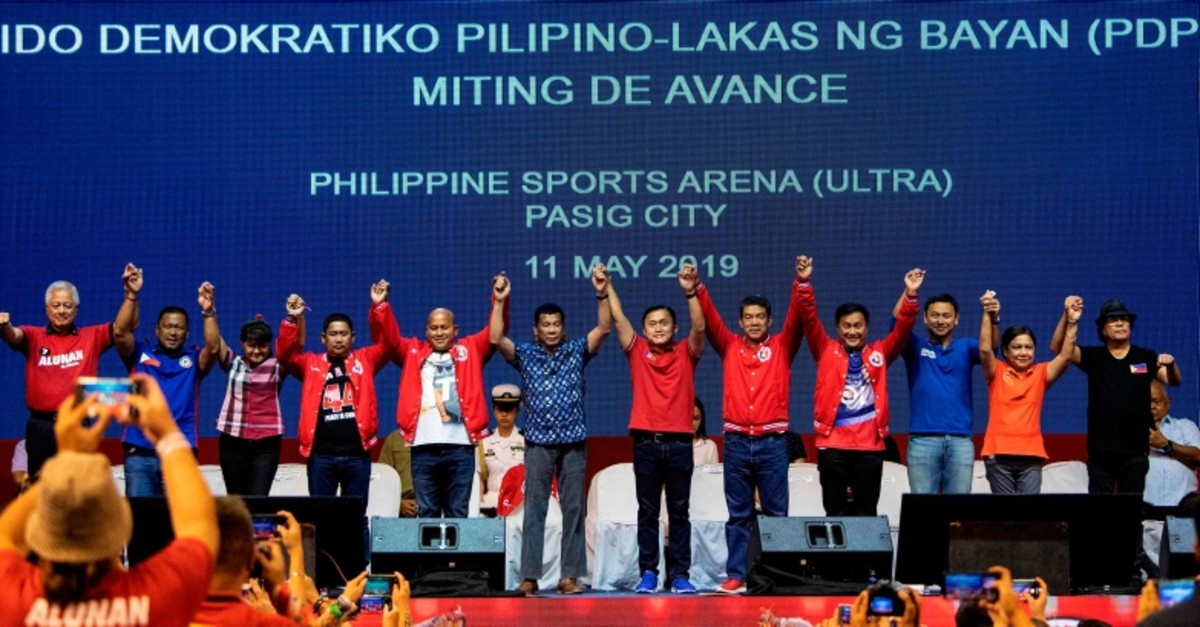 Philippine President Rodrigo Duterte (C) raises the hands of senatorial candidates during the Partido Demokratiko Pilipino-Lakas Bayan (PDP-LABAN) in Manila on May 11, 2019 ahead of the mid-term elections on May 13. (AFP Photo)
by Compiled from Wire Services May 14, 2019 3:52 pm

President Rodrigo Duterte's allies appeared to have overwhelming leads in elections for the Philippine Senate, one of the opposition's last bulwarks against a brash populist leader accused of massive human rights violations.

Preliminary results comprising 94% of returns from Monday's midterm elections showed at least eight candidates endorsed by Duterte were leading in races for 12 seats in the 24-member Senate. Official Commission on Election results are expected to be declared in about a week.

A Senate majority would cut the chance of censures and house investigations against his government, making it easier to co-opt independents and remove the few remaining hurdles to an ambitious agenda for massive infrastructure spending, re-drafting the constitution and the return of the death penalty.

"This president's popularity and transferability of his popularity is unprecedented to say the least, despite all the controversies," said political analyst Edmund Tayao.

"You expect normally two or three candidates from the opposition to win, but this is a wipe-out."

Candidates leading the Senate contest include Duterte's closest aide, the daughter of late dictator Ferdinand Marcos, the wife of the country's richest man, a movie star, a jailed politician recently cleared of plunder charges, and a police general who spearheaded Duterte's brutal war on drugs.

They would join 12 Senate incumbents, only four of whom are from the opposition, including Leila de Lima, the biggest critic of Duterte's deadly anti-drugs crackdown, held since 2017 on narcotics charges.

Monday's vote is seen as a gauge of public support for Duterte, who is midway through the single six-year term Philippine presidents are allowed under the constitution. His anti-drug crackdown, unorthodox leadership style, combative and sexist joke-laden outbursts, and contentious embrace of China have been the hallmarks of his presidency.

Duterte's three children were also expected to win races for mayor, vice mayor and a congressional seat representing their southern home region of Davao city. The 74-year-old maverick leader first carved a reputation as an extra-tough mayor of the city who hunted drug addicts and criminals on a Harley Davidson motorcycle and carried the nickname Duterte Harry after the gunslinging Clint Eastwood film character.

"The overwhelming majority of the electorate have responded to the call of the president to support those whom he said would help pass laws supportive of his goal to uplift the masses of our people and give them comfortable lives."

Manila-based analyst Ronald Holmes, however, said that except for dela Rosa and Duterte's longtime aide, Bong Go, who entered politics for the first time without their own established bases of support, other leading administration senatorial contenders earned votes based on their own political track records.

The flipside of Duterte's perceived endorsement strength was the weakness of the opposition ticket and its campaign, said Holmes, who heads Pulse Asia, an independent pollster that predicted the dominance of Duterte's senatorial bets.

Another analyst, Richard Heydarian, said many Filipinos seem more open to authoritarianism due to failures of past liberal leaders from long-established political clans. Such a mindset has helped the family of the late dictator Ferdinand Marcos make a political comeback, the latest through the senatorial bid of one of his daughters, Imee Marcos, who was endorsed by Duterte and whose vote tally in unofficial results indicated a victory.

Duterte, who has shown little tolerance for critics, especially those who question his anti-drug campaign, aimed for stronger leverage in the traditionally more independent Senate to bolster his legislative agenda.

That includes the return of the death penalty, lowering the age for criminal liability below the current 15, and revising the country's 1987 constitution primarily to allow a shift to a federal form of government, a proposal some critics fear may be a cover to remove term limits.

The handful of incumbent opposition senators whose seats were not up for election could potentially get backing from leading independent aspirants to veto Duterte's emerging majority in the upper chamber. At least seven senators are needed to block any proposal by Duterte's camp to revise the constitution, which was passed with anti-dictatorial safeguards in 1987, a year after Marcos was ousted by an army-backed "people power" revolt.

"While we expect dissent to continue, we hope that that same be demonstrated with fairness and within the bounds of the law, as well as with deference to the leaders duly chosen by the electorate," Panelo said.

Aside from the drug killings, Duterte's gutter language and what nationalists say is a policy of appeasement toward China that may undermine Philippine territorial claims in the South China Sea have also been the cause of protests and criticism.

Opposition aspirants consider the Senate the last bastion of checks and balances given the solid dominance of Duterte's loyalists in the lower House of Representatives.

Voters in Monday's elections made their choices for 18,000 congressional and local posts, including 81 governors, 1,634 mayors and more than 13,500 city and town councilors in 81 provinces. In the Manila metropolis, younger mayoral candidates defeated three long-entrenched political clan leaders, including former President and Manila Mayor Joseph Estrada, who lost to Isko Moreno Domagoso, also a former movie actor.

The elections were relatively untroubled, despite pockets of violence in southern Mindanao region, which is under martial law as government forces hunt down Daesh group-linked militants and communist insurgents.

The mid-terms come as Duterte, 74, appears untouchable, with last year's spiraling inflation under control and a recent poll showing his public approval rating at a staggering 81 percent.

Experts say the winning formula was selling Duterte as a brand, including use of his daughter Sara as a surrogate to promote his candidates, in a possible succession play for the 2022 presidential election. The result also shows the effectiveness of a diehard social media support base, despite intermittent outrage over his pro-China stance, jokes about rape, tirades about the church, and his anti-drugs crackdown.

Duterte's critics needed to accept that the electorate had rejected such negative propaganda, Panelo added.

The opposition, however, said it would not give in.

"Our fight for justice, for sovereignty and a more progressive future for our people continues," said incumbent Senator Francis Pangilinan.