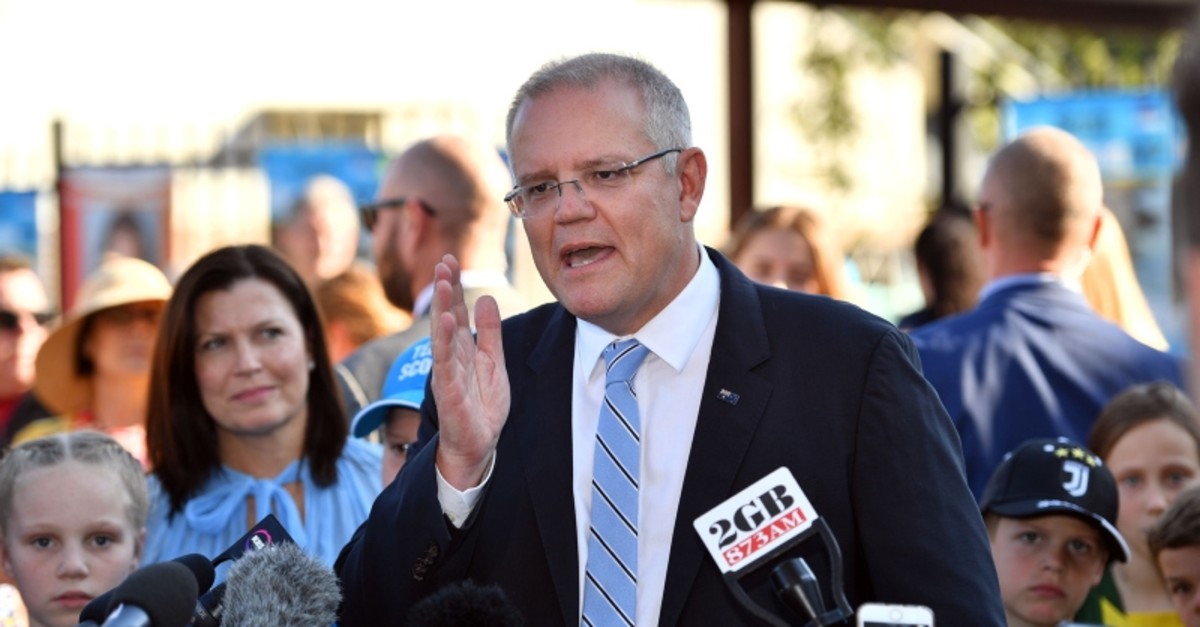 Australia's Prime Minister Scott Morrison talks to the media outside a polling booth during Australia's general election in Sydney on May 18, 2019. (AFP Photo)
by Compiled from Wire Services May 18, 2019 3:23 pm

National broadcaster ABC called the election for Prime Minster Scott Morrison's coalition, although it was not clear if it would be a minority or majority government and many battlegrounds yet to declare, according to Australian Electoral Commission projections. The Scott Morrison-led coalition has won or is ahead in 72 seats in its quest for a 76-seat majority, AEC announced. There are also 40 of 76 Senate spots contested in the election, the outcome of which will determine how difficult it will be for the next government to enact policy.

The vote count in Australia's general election on Saturday was proving closer than opinion polls had predicted, with the ruling Liberal-National conservative coalition appearing more likely to form a government than the favored center-left Labor Party. Early results showed a fractured electorate with minor populist and right-wing parties playing an outsized role.

With voting mandatory in Australia, around 16.4 million people are believed to have cast their ballots across the vast island-continent.

Opposition Labor's deputy leader Tanya Plibersek had said in early counting that she was "more cautiously optimistic than confident." But she predicted a tighter result as counting progressed. "The only thing you can say about tonight is it's likely to be a very late night," Plibersek said.

It was not clear whether the results would be available by the end of vote counting on Saturday. Opinion polls had suggested that the conservative Liberal Party-led coalition would lose its bid for a third three-year term, and that Scott Morrison would have had one of the shortest tenures as prime minister in the 118-year history of the Australian federation.

Labor leader Bill Shorten, voting in Melbourne, was bullish about forming a majority government after a final poll before the election showed the lead for his party increasing.

"Today is the people's day," he said. "Be it buying a 'democracy sausage', the kids having a bit of a sugar cake or what have you, and voting," he added, referring to the tradition of serving grilled sausages on election day.

"In the event that the people of Australia voted to stop the chaos and voted for action on climate change, we will be ready to hit the ground from tomorrow."

But as results from the northeastern state of Queensland trickled in, it became clear the Liberals had done better than expected.

Morrison is the conservatives' third prime minister since they were first elected in 2013. He replaced Malcolm Turnbull in a leadership ballot of government colleagues in August.

Weeks ago, Morrison had been heading for an electoral drubbing. But he has closed the gap with a negative campaign and backing from the country's biggest media organization -- owned by Rupert Murdoch -- mainly targeting older, wealthier voters who face fewer tax breaks under Labor.

After casting his vote in the Sydney suburbs, Morrison acknowledged the challenge his coalition faced, saying: "I don't take anyone's support in this country for granted."

"Australians know very well what it is we are saying in terms of keeping our economy strong, keeping our budget under control... keeping Australians safe and secure," he said, hitting the conservatives' key talking points against Labor.

The mood was somber in Shorten's hometown of Melbourne on Saturday night as the anticipated victory dissipated.

"I think people have become afraid after a very negative campaign," Labor supporter Julie Nelson told Reuters at the party's Melbourne election night function. "They managed to convince people they should be afraid of change."

Climate change had featured prominently throughout the campaign. Australia is one of the most vulnerable of all developed nations to climate change and a season of record floods, wildfires and droughts has brought the issue from the political fringes to front and center of the campaign.

In northern Sydney, former prime minister Tony Abbott -- who once described climate change as "crap" -- lost a seat he has held for a quarter century to independent challenger Zali Steggall, a lawyer and Olympic medalist in Alpine skiing.

While admitting his own defeat, mainly over the climate issue, Abbott, who became the first of the three conservative prime ministers in the 2013 election, claimed there had been a "realignment" in Australian politics with Liberals winning more of the working class vote, adding: "I'm not going to let one bad day spoil 25 years."

As prime minister in 2014, Abbott repealed a carbon tax introduced by a Labor government. Abbott was replaced by Turnbull the next year because of poor opinion polling, but he remained a government lawmaker.

Both major parties suffered a fall in their primary vote, according to AEC data, which was caused in part by a high-profile campaign by Clive Palmer's populist United Australia Party.

Morrison began the day Saturday by campaigning in the island state of Tasmania, where the Liberals were making gains in Labor-held seats. He then flew 900 kilometers (560 miles) home to Sydney to vote and to campaign in Sydney seats.

Shorten contained his campaigning to polling centers in his hometown of Melbourne, where he voted Saturday morning. He said early in the day that he expected that Labor would start governing from Sunday. He said his top priorities would be to increase wages for low-paid workers, hike pay rates for working Sundays and reduce Australia's greenhouse gas emissions.

Shorten has been campaigning hard on more ambitious targets to reduce Australia's greenhouse gas emissions. The government has committed Australia to reduce its emissions by 26% to 28% below 2005 levels by 2030. Labor has promised a 45% reduction in the same time frame.

Shorten, a 52-year-old former labor union leader, has also promised a range of reforms, including the government paying all of a patients' costs for cancer treatment and a reduction of tax breaks for landlords.

Both major parties are promising that whoever wins the election will remain prime minister until he next faces the voters' judgment. The parties have changed their rules to make the process of lawmakers replacing a prime minister more difficult.

During Labor's last six years in office, the party replaced Prime Minister Kevin Rudd with his deputy Julia Gillard, then dumped her for Rudd.

The national campaign has been an often ill-tempered pitched-battle. Candidates have been egged and abused, and a slew have resigned for racist, sexist and otherwise jaw-dropping social media posts.

In Abbott's battleground seat, a 62-year-old man was arrested and charged with thrusting a corkscrew into the stomach of someone putting up campaign banners on the eve of the election.

If Morrison wins, it would be a monumental upset, having scrapped for his political life in the hope of not entering the history books as one of the shortest-serving prime ministers in Australian history.

He took office last August after a party room coup by conservative hardliners that ousted moderate, pro-climate leader Turnbull -- the latest in a series of political fratricides that have made Canberra politics look like "Game of Thrones" meets "The Hunger Games."

Much of Morrison's cabinet resigned before the election or went into virtual hiding during the campaign because of their unpopularity.

If Shorten is elected, he would become the sixth prime minister sworn into office in a decade. He has struggled with low personal approval ratings, but became a more polished campaigner as the election neared.

Still, his relative lack of charisma was underlined Thursday by the death of much-loved former prime minister Bob Hawke, an Oxford-educated lovable rogue, equally at home chugging a pint or debating Keynesian economics.

Due to Australia's complex system where voters must rank all candidates in each electorate, officials said it could take hours after the polls close before the election outcome is known.