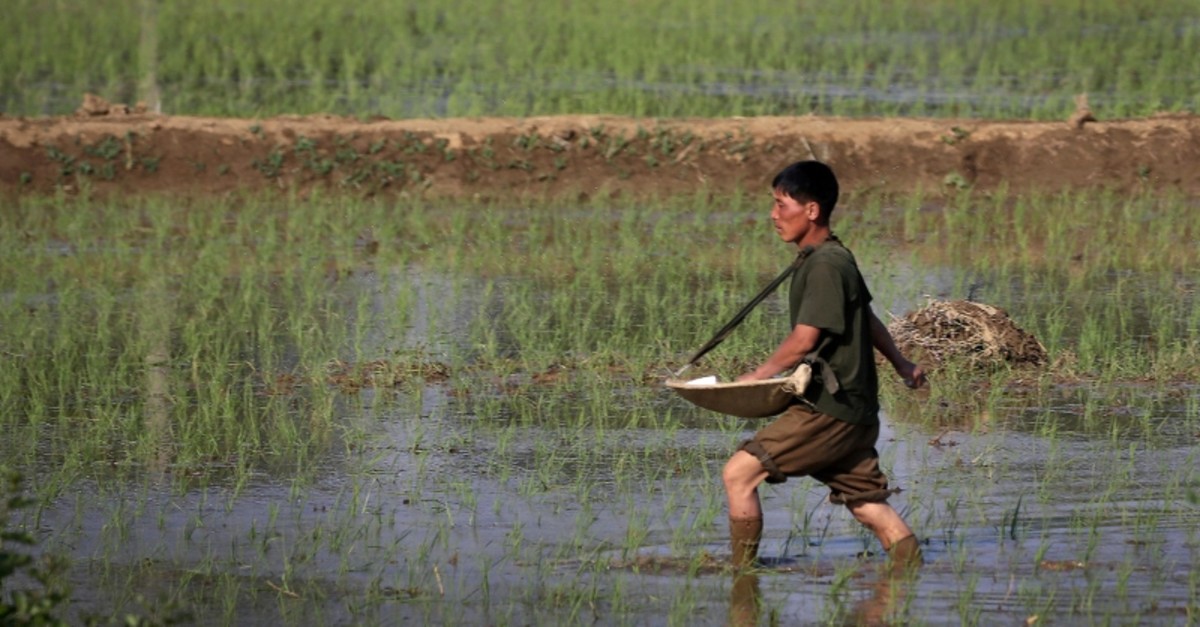 In this June 13, 2017, file photo, a farmer fertilizes rice seedlings in fields located along a highway in Pyongyang, North Korea. (AP Photo)
by Associated Press May 20, 2019 1:12 pm
South Korea vowed Monday to move quickly on plans to provide $8 million worth of medical and nutritional aid for North Korean children through U.N. agencies while it also considers sending broader food aid to the country, which says it is suffering its worst drought in decades.

Lee Sang-min, spokesman for Seoul's Unification Ministry, said the government will discuss its plans with the World Food Program and the United Nations Children's Fund, through which the aid would be provided, so it reaches North Korean children and pregnant women quickly. South Korea is also trying to build public and political support for providing wider food aid to North Korea, either directly or through the WFP.

North Korea's state media said last week that the country was suffering its worst drought in more than a century amid reported food shortages.

"The government will first discuss with international organizations over the provision of aid and take measures so that the support arrives (in North Korea) quickly," Lee said. "On the matter of direct aid, we will consider the matter while sufficiently garnering the opinions of our citizens."

South Korean President Moon Jae-in has expressed hopes that aid will help revive diplomacy and engagement with North Korea, which tapered off after a nuclear summit between North Korean leader Kim Jong Un and President Donald Trump in February broke down because of differences over sanctions relief and disarmament steps. Kim has since declared that the Trump administration has until the end of the year to come up with mutually acceptable terms for a deal to salvage the negotiations.

While the United States has urged allies to maintain economic pressure on North Korea until it takes material steps toward relinquishing its nuclear weapons, White House spokesman Sarah Sanders recently said Washington has no plan to "intervene" if South Korea moves forward with food aid.

But Moon's government has yet to decide on concrete plans amid growing public frustration over Kim's government, which recently resumed short-range missile tests that were apparently aimed at pressuring Washington and Seoul.

It is also unclear whether any aid package from South Korea would influence the behavior of North Korea, which has been demanding much bigger concessions from the South, such as resuming inter-Korean economic projects currently held back by the U.S.-led sanctions against the North. A North Korean propaganda website last week described the South Korean proposals for humanitarian aid as disrespectful and said Seoul was trying to sidestep fundamental issues with "hollow talk and boastful credit-taking."

North Korea's official Korean Central News Agency said last Wednesday that an average of 54.4 millimeters (2.1 inches) of rain fell in North Korea from January to early May, which it said was the lowest level since 1982. Two days later, the state-run Rodong Sinmun newspaper said the average precipitation of 56.3 millimeters (2.2 inches) from January to May 15 was the country's lowest since 1917.

U.N. food agencies said earlier this month that about 10 million people were facing "severe food shortages" after one of North Korea's worst harvests in a decade.

North Korean state media are urging farmers to do their best with what they have, to grow as much as possible this year. The Rodong Sinmun urged North Korean farmers on Saturday to meet state goals in food production in the face of "hostile forces who don't want us to become prosperous and ... are seeking to make our people undergo shortage of food, bring to collapse their faith in socialism."

"At our farm, we got an announcement about the dry weather conditions from our party and our state authorities, so we have taken advance measures to save water, like preparing the fields earlier than before, because we have to save water as much as we can," said Kim Chang Jun, vice chairman of a cooperative farm in the village of Sambong, just outside the capital.

The last time South Korea provided humanitarian aid to North Korea through an international agency was in 2015, when it gave $800,000 to a U.N. Population Fund project to evaluate North Korean public health conditions.

South Korea has not provided direct food aid to North Korea since 2010.

Moon's government first proposed providing $8 million to the WFP and UNICEF to help North Korean children and pregnant women in 2017, but the plans were halted amid a series of North Korean weapons tests that year. An abrupt turn toward diplomacy in 2018 saw Kim meet with Trump twice and three times with Moon.