Malaysia to ship 3,000 tons of plastic waste back to countries of origin 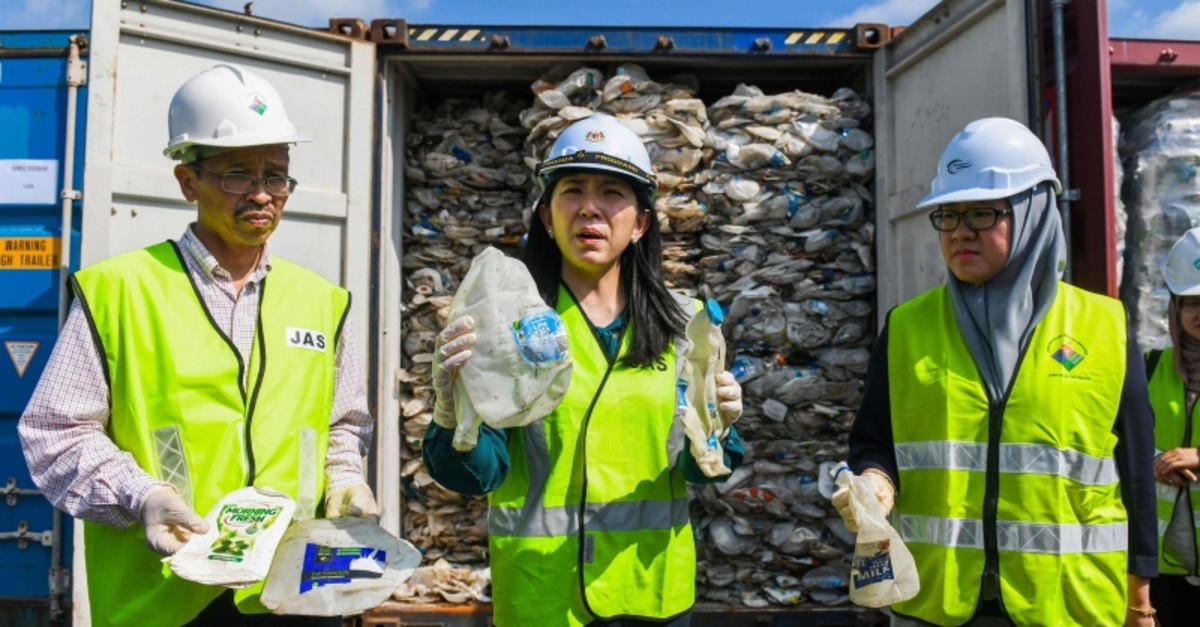 Minister of Energy, Science, Technology, Environment and Climate Change (MESTECC), Yeo Bee Yin (C) shows samples of plastics waste shipment from Australia before sending back to the country of origin in Port Klang, on May 28, 2019. (AFP Photo)
by Compiled from Wire Services
May 28, 2019 1:29 pm

Malaysia will send back some 3,000 metric tons (3,300 tons) of non-recyclable plastic waste to countries such as the U.S., U.K., Canada and Australia in a move to avoid becoming a dumping ground for rich nations, Yeo Bee Yin, minister of energy, technology, science, environment and climate change, said Tuesday.

Yeo said Malaysia and many developing countries have become new targets after China banned the import of plastic waste last year. She said 60 containers stacked with contaminated waste were smuggled in en route to illegal processing facilities in the country and will be sent back to their countries of origin.

Ten of the containers are due to be shipped back within two weeks, she said, as she showed reporters contents of the waste at a port outside Kuala Lumpur.

The displayed items included cables from the U.K., contaminated milk cartons from Australia and compact discs from Bangladesh, as well as bales of electronic and household waste from the U.S., Canada, Japan, Saudi Arabia and China. Yeo said the waste from China appeared to be garbage from France and other countries that had been rerouted after a ban imposed by China.

In one case alone, Yeo said a U.K. recycling company exported more than 50,000 metric tons (55,000 tons) of plastic waste in about 1,000 containers to Malaysia over the past two years.

"This is probably just the tip of the iceberg (due) to the banning of plastic waste by China," Yeo told a news conference. "Malaysia will not be a dumping ground to the world ... we will fight back. Even though we are a small country, we can't be bullied by developed countries."

"We will return it back to the country of origin without any mercy," she said, after an inspection of several waste-filled containers at Port Klang, the country's busiest port.

The government has clamped down on dozens of illegal plastic recycling facilities that had mushroomed across the country, shuttering more than 150 plants since last July. Earlier this month, the government also sent back five containers of waste to Spain.

Yeo said China's plastic waste ban had "opened up the eyes of the world to see that we have a huge garbage and recycling problem."

Citizens in rich nations diligently separate their waste for recycling but the garbage ended up being dumped in developing nations where they are recycled illegally, causing environmental and health hazards, she said.

"We urge the developed countries to review their management of plastic waste and stop shipping the garbage out to the developing countries," she said, calling such practices "unfair and uncivilized."

The influx has sparked a rapid increase in the number of recycling plants, many of them operating without a license and with little regard for environmental standards.

The ministry said 450 tons of contaminated plastic waste in 10 containers -- from Australia, Bangladesh, Canada, China, Japan, Saudi Arabia and the United States -- will be shipped back.

Port officials said their contents were misdeclared, but did not give a date for the shipment.

"These containers are filled with contaminated, non-homogenous, low-quality, non-recyclable plastic waste, and are routed to processing facilities which do not have the technology to recycle in an environmentally sound manner," the ministry said.

Philippine President Rodrigo Duterte last week ordered his government to hire a private shipping company to send 69 containers of garbage back to Canada and leave them within its territorial waters if it refuses to accept them.

Canada says the waste, exported to the Philippines between 2013 and 2014, was a commercial transaction done without government consent.

Canada had agreed to take the rubbish back but Duterte lost patience as arrangements were being made and ordered it out.

Around 300 million tons of plastic are produced every year, according to the Worldwide Fund for Nature (WWF), with much of it ending up in landfill or polluting the seas, in what is becoming a growing international crisis.

As little as nine percent of plastic produced between 1950 and 2015 has been recycled.

Pictures of coral reefs smothered in plastic bags and river systems choked with PET bottles have sparked a growing worldwide awareness of the need to deal with the problem.

Plastic unsuitable for recycling is burnt, which releases toxic chemicals into the atmosphere. Or it ends up in landfill, which can contaminate soil and water sources.

This month, about 180 countries agreed to amend the Basel Convention to make global trade in plastic waste more transparent and better regulated.

The United States, the world's top exporter of plastic waste, has not ratified the 30-year-old pact.