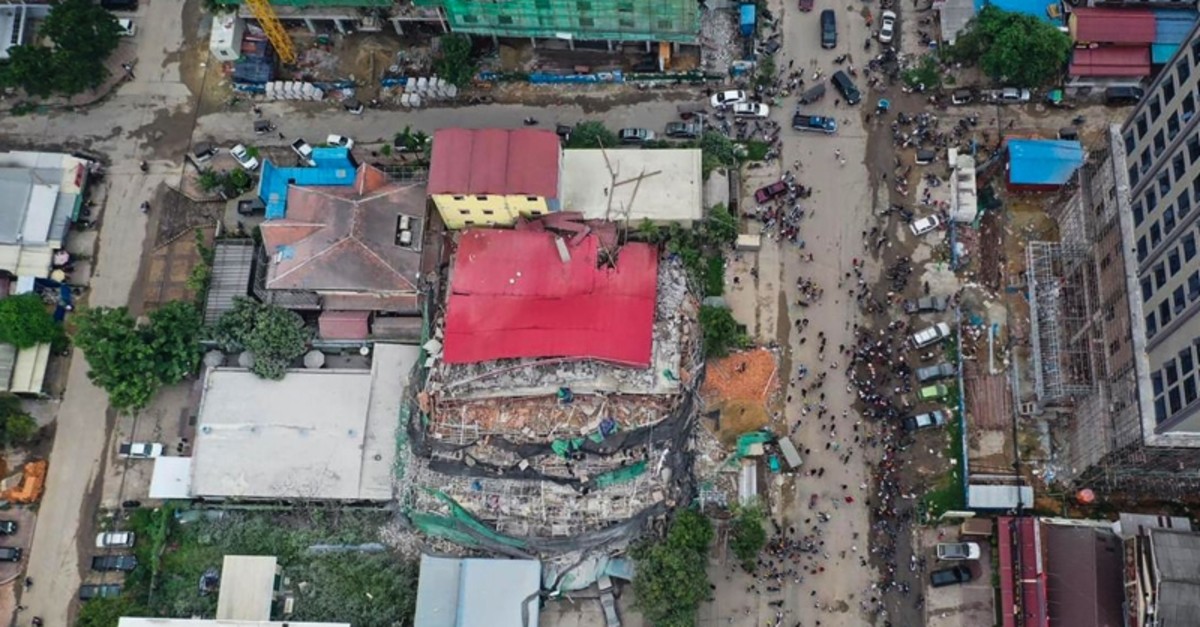 This aerial photo taken on June 22, 2019 shows a collapsed building at a construction site in Sihanoukville. (AFP Photo)
by Compiled from Wire Services Jun 22, 2019 3:46 pm

Provincial authorities said in a statement that four Chinese nationals involved in the construction have been detained while an investigation into the collapse is carried out.

Rescue work at the site was underway to find out if any more workers were trapped in the rubble, said the city police chief, Maj. Thul Phorsda. Workers could be seen using saws to cut steel beams and excavators to move piles of rubble from the site.

The Ministry of Labor and Vocational Training said that 30 workers were at the site when the building tumbled around 4 a.m. Police and provincial authorities said they were unsure how many people were working on the building.

It wasn't immediately clear what caused the collapse.

Yun Min, the governor of Preah Sihanouk province, said the building was owned by a Chinese investor who leased land for a condominium — one of many Chinese projects in the thriving beach resort.

Information Minister Khieu Kanharith said on his official Facebook page that the Cambodian workers were using the unfinished structure as their sleeping quarters. The building was about 70% to 80% completed.

Sihanoukville was once a sleepy fishing community before being claimed first by Western backpackers, and then wealthy Russians.

Chinese investment has flooded in in recent years, spurring a construction boom in a resort town known for its casinos which pull in mainland tourists.

There are around 50 Chinese-owned casinos and dozens of hotel complexes under construction.

Between 2016 and 2018, $1 billion was invested by Chinese government and private businesses in the Preah Sihanouk province, according to official statistics.

Cambodia, one of Southeast Asia's poorest countries, has notoriously lax safety laws and labor protections. Accidents are common at its building sites.