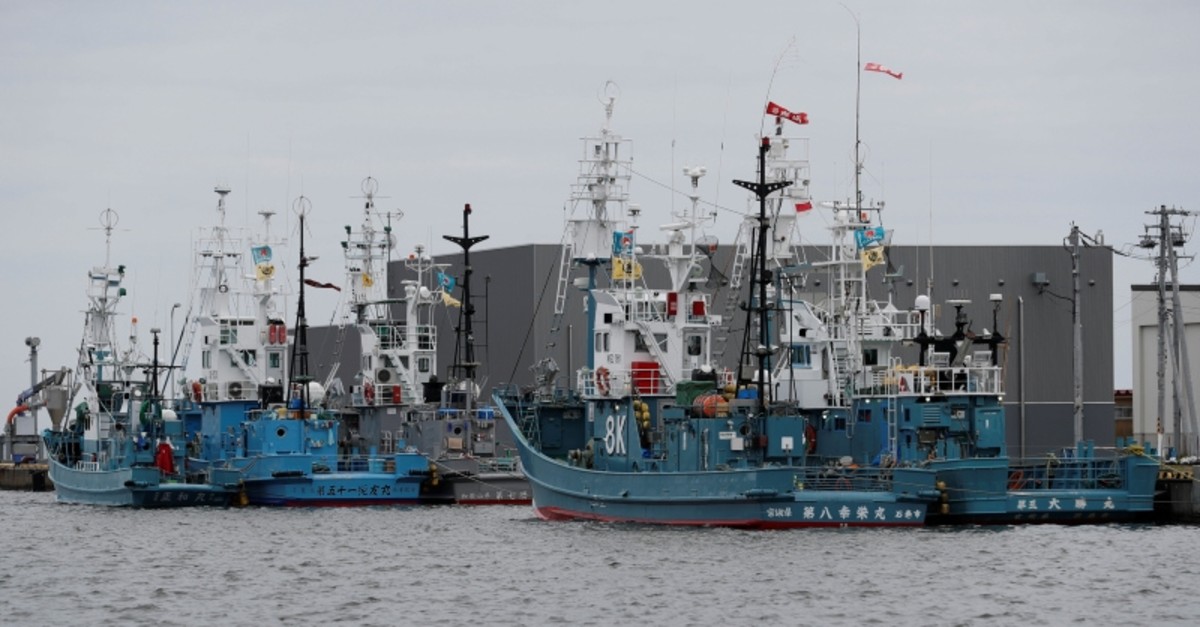 Whaling ships which are set to join the resumption of commercial whaling at anchor at a port in Kushiro, Hokkaido Prefecture, Japan, June 30, 2019. (Reuters Photo)
by reuters Jun 30, 2019 1:27 pm

Japanese whaling ships prepared on Sunday to set to sea, with crews gathering on decks in a northern port a day ahead of Japan's first commercial whaling hunt in more than 30 years.

Japan announced last year it was leaving the International Whaling Commission (IWC) and would resume commercial whaling on July 1, sparking global condemnation and fears for the world's whales.

Japan has long maintained that eating whale is an important part of its culture and that most species are not endangered.

A global whaling moratorium was imposed in 1986, but Japan then began what it called scientific research whaling in the North Pacific and Antarctic. Critics said the it was simply commercial whaling in disguise.

"I used to eat whale when I was young, but it's been too expensive recently," said Sachiko Sakai, 66, a taxi driver waiting for fares in Kushiro, a port town on the northernmost main island of Hokkaido.

"Maybe now that commercial whaling is going to restart, it'll be cheaper and we can get our hands on it more easily."

The hunt will be confined to Japan's exclusive economic zone.

The five small whaling ships due to set off early on Monday were moored at a wharf in a quiet corner of Kushiro port.

On their decks were what appeared to be harpoon guns covered in tarpaulins.

The vessels come from whaling ports around Japan, including one from Taiji, the town made notorious for its dolphin drive-hunts featured in the Oscar-winning documentary "The Cove".

Some vessels were decorated with good luck flags, flapping in a cold wind.

Some crew members carried groceries while others held towels and shampoo, apparently headed to a public bath. One wore brightly coloured shorts decorated with images of whales and other animals.

All declined to talk.

Prime Minister Shinzo Abe, whose district includes the old whaling center of Shimonoseki, has long campaigned to restart commercial whaling, but the industry's future is far from clear.

Only about 300 people around Japan are directly connected to whaling, and the annual supply of whale – about 5,000 tons – amounts to roughly 40-50 grams per Japanese person a year.

"To resume this so we can eat it – well, that's good," said Yuya Kusakari, 37, who was fishing for flounder with his 8-year-old son not far from where the whaling ships were docked.

Kusakari said he ate whale maybe once or twice a year.

"It's really not all that available now, and it's expensive," he said.