Heaviest rains to hit Mumbai in a decade kill 32 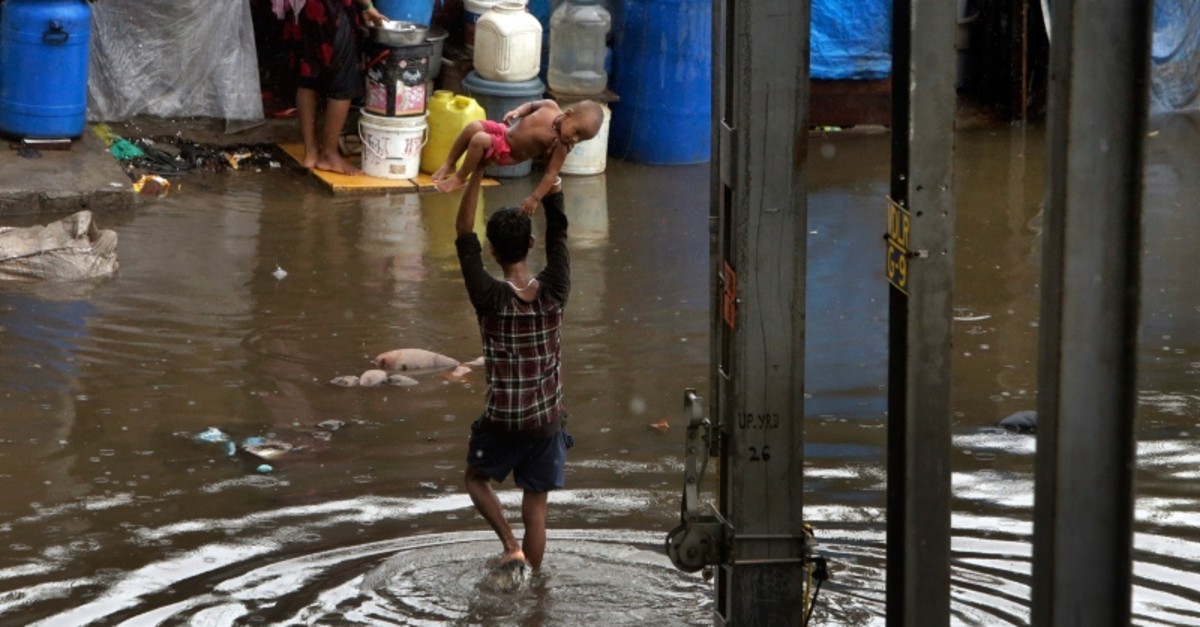 A man holds a child high above his head as he wades through a waterlogged street following heavy rains in Mumbai, India, Tuesday, July 2, 2019. (AP Photo)
by Compiled from Wire Services Jul 02, 2019 10:26 am

Monsoon rains caused wall collapses that killed 32 people in India on Tuesday, as a second day of bad weather disrupted rail and air traffic in the financial capital Mumbai, prompting officials to shut schools and offices, though markets were open.

Weather officials confirmed that Mumbai had received the most rain over a 24-hour period since 2005 and sounded a red alert, warning of more rain to come.

The non-stop rainfall since Monday forced authorities to declare a public holiday, while appealing to people to stay indoors.

At least 21 people died and 60 were injured when a perimeter wall of an urban forest collapsed on a slum in the city's East Malad area, police officer Udaykumar Rajeshirke said.

"Rescue work is still going on," a fire brigade official said. "So far we have rescued more than two dozen people."

Two men drowned in a car in the same area after it got stuck in an underpass, broadcaster NDTV reported. Another three people, including a 3-year-old boy, were killed in the Mumbai suburb of Thane after the wall of a school crashed on two houses, according to police.

In a similar rain-related collapse in the Ambegaon area of Pune, some 200 kilometers from Mumbai, six workers were killed and three more were injured, local officials said.

Mumbai is looking to turn itself into a global financial hub but large parts of the city struggle to cope with annual monsoon rains, as widespread construction and garbage-clogged drains and waterways make it increasingly vulnerable to chaos.

More than 375 mm (14.8 inches) of rain fell over 24 hours in some areas of Mumbai, flooding streets and railway tracks, forcing the suspension of some suburban train services, which millions of commuters ride to work each day.

That was the highest amount since the city's 2005 flooding, regarded its worst in recent history, when it received an unprecedented 944 millimetres of rain in a single day.

"It is nature's fury. Any city in the world can crumble if it receives rain of around 400 millimeters. We are doing our best. Our pumping stations are working to drain the rainwater out," Aditya Thackeray of the regional Shiv Sena party, which runs the city's municipal council, told reporters.

About 1,000 people stranded in low-lying areas of the city were rescued after a swollen river began to overflow, municipal authorities said.

"Rain is expected to remain intense even today," city authorities said on Twitter. "We request you to stay indoors unless there's an emergency."

Financial markets were open on Tuesday, though trading volumes were expected to be lower than normal. Many firms asked employees to work from home.

The main runway at Mumbai airport, India's second biggest, was closed from midnight after a SpiceJet flight overshot the runway while landing, an airport spokeswoman said.

The secondary runway is operational, but 55 flights were diverted and another 52 were canceled due to bad weather, she said.

One of the biggest cities on Earth with around 20 million inhabitants, Mumbai, receives heavy rainfall every monsoon season between June and September.

In 2005, floods killed more than 500 people in Mumbai, the majority in shantytown slums home to more than half the city's population.