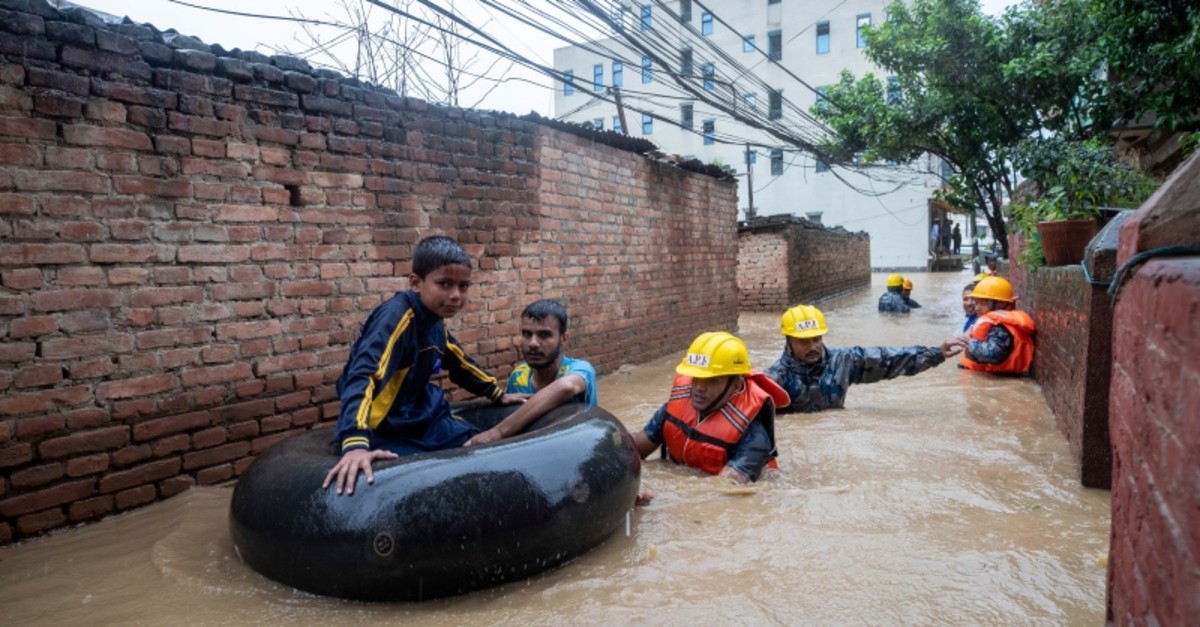 Flooding and landslides triggered by heavy rainfall have killed at least 45 people in Nepal in the past few days, with more deaths reported across the Himalayan border in India, officials said Sunday.

At least 31 others are missing in Nepal, either swept by swollen rivers or buried by mudslides since delayed monsoon rains began pounding the region Friday, Nepal's National Emergency Operation Center said.

The center said nine key highways remained blocked by floods and mudslides and attempts are underway to open them up for traffic. Among them is the East-West Highway that connects the country's southern districts.

Other roads were being cleared by thousands of police and soldiers. Continuing bad weather has grounded helicopter rescue flights.

Twenty-eight people have been treated for injuries and more than 1,100 others rescued from flooded areas. More than 10,000 people are estimated to have been displaced.

Nepal's Department of Hydrology and Meteorology warned of more troubles ahead in a flood warning for the southern region near the main rivers, urging people to keep watch on rising water levels and move to higher grounds when needed.

Rain-triggered floods and mudslides have left a trail of destruction in other parts of South Asia. Officials and media outlets in northeastern India have reported at least 39 people dead and more than 1.5 million affected.

At least 19 people have been killed in incidents of house collapses and electrocution during rains in Uttar Pradesh state bordering Nepal since July 10, an official at the state disaster management control room said.

In the north-eastern state of Assam, 11 people were killed in the same period, as incessant rains flooded 25 of the state's 33 districts.

Over 1.5 million people have been affected, including being displaced, stranded in their homes and suffering damage to their crops, lands and livelihood, state officials said.

Over 20,000 people have been shifted to 234 government-run relief camps and centers, they said.

Elsewhere in Assam, Kaziranga National Park, home to the endangered one-horn rhinoceros, has been flooded. The park is located 225 kilometers (140 miles) east of Gauhati, the state capital.

The dead included two schoolchildren who were buried when their boarding school collapsed while they were asleep in Tawang in Arunachal Pradesh state.

Floods and mudslides have also hit some other northeastern states, including Meghalaya, Sikkim and Mizoram. In Mizoram, floods have submerged about 400 homes in the small town of Tlabung, police said. At least seven others died due to rain-related issues in Meghalaya and Mizoram in the last four days, local media reported.

The weather office has forecast more rainfall in the regions over the next few days, prompting the federal home ministry to direct officials to ensure proper rescue and relief mechanisms are in place to help flood victims.

In Bangladesh, aid groups were providing rations to Rohingya refugees in the southeast of the country with the UN World Food Programme saying Friday that two people including a child had died.

India's monsoon season between June and September often sees heavy rains that are vital for agriculture but can cause immense destruction.

Last year, more than 1,200 people were been killed across South Asia in monsoon storms, with India's Kerala suffering its worst floods in nearly 100 years.