14 killed as building collapses in India after monsoon rains 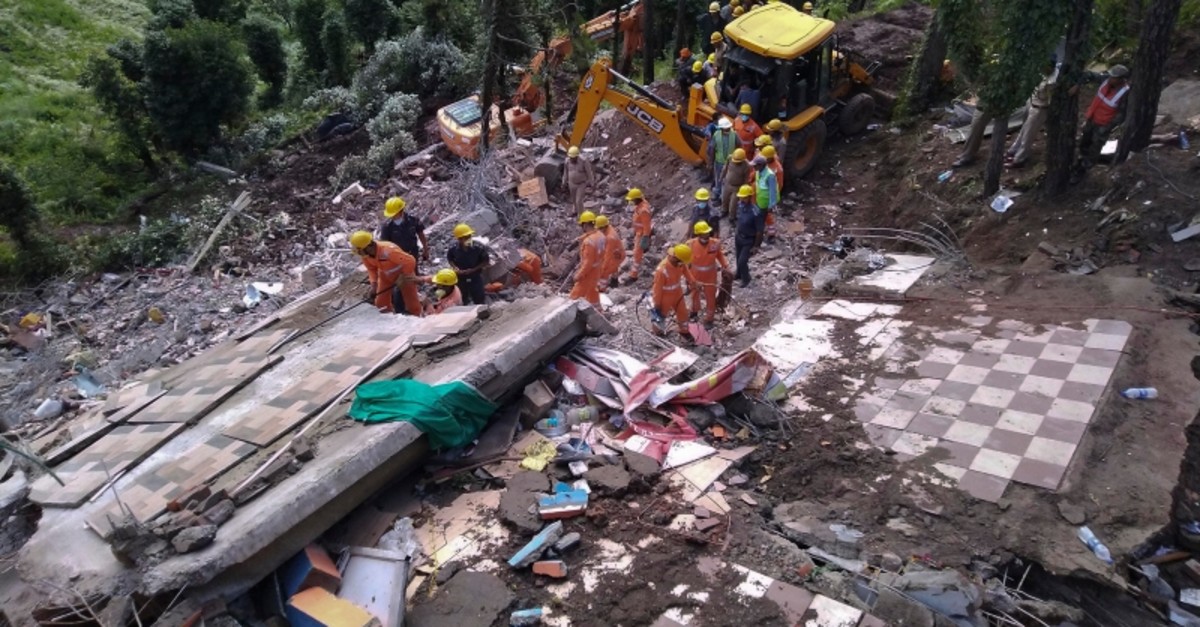 Rescuers were looking for two to three people still unaccounted after Sunday's collapse, said Gaurav Srivastav, an official from the National Disaster Response Force, or NDRF.

A statement from the state Chief Minister's office said 14 people had died, all but one of whom were soldiers. Fire official Raja Ram Bhagate said the soldiers were having a party in a ground floor restaurant in the building when it collapsed.

Several soldiers were among the 31 people rescued after the collapse occurred in Solan, a town in Himachal Pradesh state. The area is 310 kilometers (195 miles) north of New Delhi.

More than 70 NDRF rescuers and 40 fire officers have been clearing the rubble, using earth movers, drillers and gas cutters.

The building shook and collapsed in no time, the Press Trust of India news agency, or PTI, quoted an injured soldier as saying.

Another injured person, Rakesh Kumar, said dozens of soldiers and other customers were in the building, along with restaurant workers.

"We thought it was a quake and did not know how the building collapsed. We were trapped under the debris. I remained trapped for about 10-15 minutes before some people rescued me," PTI quoted Kumar as saying.

Such incidents are common across the region during the monsoon because of dilapidated structures that buckle under the weight of continuous rain.

Floods and landslides caused by the annual deluge have wreaked deadly havoc from the Himalayan foothills to low-lying camps housing Rohingya refugees, with officials warning tolls could rise as they scramble to reach affected communities.

In Bangladesh, at least 29 people have died in the last week, including 18 who were hit by lightning and seven who drowned after their boat capsized in choppy waters in the Bay of Bengal.

Another 10 have died in overcrowded Rohingya refugee camps in the southeast of the country and thousands of shanty homes have been destroyed.

In neighboring Nepal, police said at least 67 have been killed in floods and landslides, while 30 more are missing.

The June to September monsoon causes widespread death and destruction across South Asia each year.

Floods have also devastated much of the northeastern Indian state of Assam where four people died on Sunday after being swept away by sudden torrents.

The state's Kaziranga National Park, a UNESCO-recognized reserve and home to two-thirds of the world's one-horned rhinos, has also been seriously affected by the weather.

In the eastern state of Bihar, five rivers were flowing over the danger levels with more rain forecast over the next few days.

The downpours have eased in Nepal but authorities still fear the death toll could rise, said police spokesman Bishwaraj Pokharel, who gave the latest number of dead and missing from floods and landslides.

"There are the challenges of resettlement of the displaced as many houses... have been swept away. We are also cautious about the risk of epidemics due to polluted water," Pokharel told AFP.

In Pakistan-administered Kashmir, officials also warned the death toll could increase as rescuers struggle to reach affected areas, and with the floods badly damaging communications.