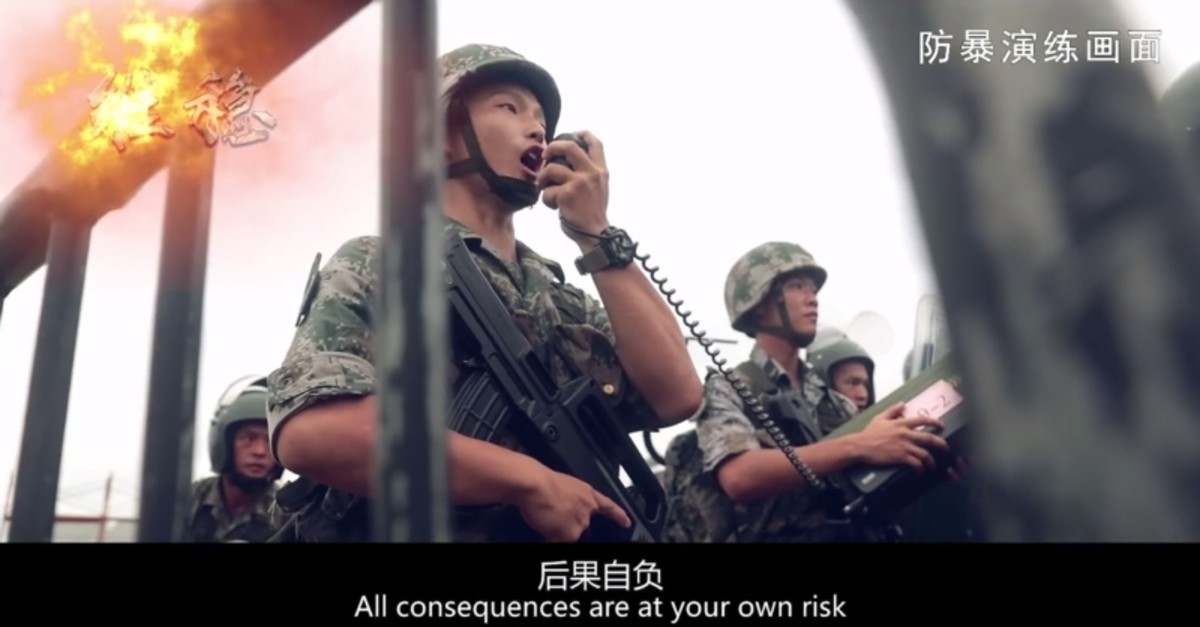 The Chinese army has released a promotional video for its Hong Kong-based troops at a time of uncertainty over whether the military will intervene in the city's summer of protest.

On the eve of Thursday's anniversary of the army's founding, the Hong Kong Garrison of China's People's Liberation Army posted on its official social media account a three-minute video showing soldiers rappelling from helicopters, aiming sniper guns and, in one sequence, throwing tear gas at a crowd dressed as civilians.

This section of the footage, labeled "anti-riot drill," shows armed soldiers in riot gear pelting tear gas and shooting water cannons in a scene with stark similarities to the current situation in Hong Kong, where the police have used tear gas, pepper spray and rubber bullets to quell pro-democracy demonstrators. Some of the targeted civilians shown in the army video are wearing helmets and masks, much like those worn by protesters who have taken to Hong Kong's streets in the hundreds of thousands over the past two months.

Soldiers in the video hold up a red warning banner that declares: "Stop Charging Or We Use Force" and shouted that those and the receiving end would bear the consequences.

A similar banner is used by Hong Kong police when they quell protests.

At the end of the drill, soldiers are seen taking some handcuffed civilians away.

A former British colony, Hong Kong was returned to China in 1997 on the principle of "one country, two systems." The framework promises Hong Kong certain democratic freedoms not afforded to the mainland. In recent years, however, Hong Kong residents have complained that Beijing is increasingly encroaching on their freedoms.

An undercurrent of distrust for the Communist Party-led central government has propelled the mass demonstrations, which began in response to extradition legislation that would have allowed Hong Kong residents to be sent to mainland China to stand trial. Hong Kong suspended the bill, but protests have continued unabated over broader demands for greater democratic rights and government accountability.

As the movement has progressed, both protesters and police have at times resorted to violence. In response to questions about whether the army will be sent in to handle demonstrators, Chinese officials have pointed to an article in Hong Kong's Garrison Law stating that troops already stationed in the city can be deployed at the request of the Hong Kong government.

Article 14 of the Basic Law, Hong Kong's mini-constitution, says PLA troops "shall not interfere" in local affairs, but that Hong Kong's government can ask for assistance from the garrison "in the maintenance of public order and in disaster relief."

"And we firmly support the patriotic people in Hong Kong in defending the rule of law in Hong Kong and safeguarding national sovereignty and security and Hong Kong's prosperity and stability," Chen said.

"We believe that the PLA force stationed in Hong Kong will continue to be the anchor for Hong Kong's long-term prosperity and stability."

Any use of the PLA against protesters would conjure up memories of the army's bloody June 1989 crackdown on student pro-democracy protests centered on Beijing's Tiananmen Square in which hundreds, possibly thousands were killed. The PLA struggled in the years afterward to rehabilitate its reputation after turning its guns on its own people.

The world's largest standing army, the PLA is actually the military wing of the ruling Communist Party with explicit instructions to follow the orders of the party, not the government.