South Korean man sets himself on fire to protest Japan 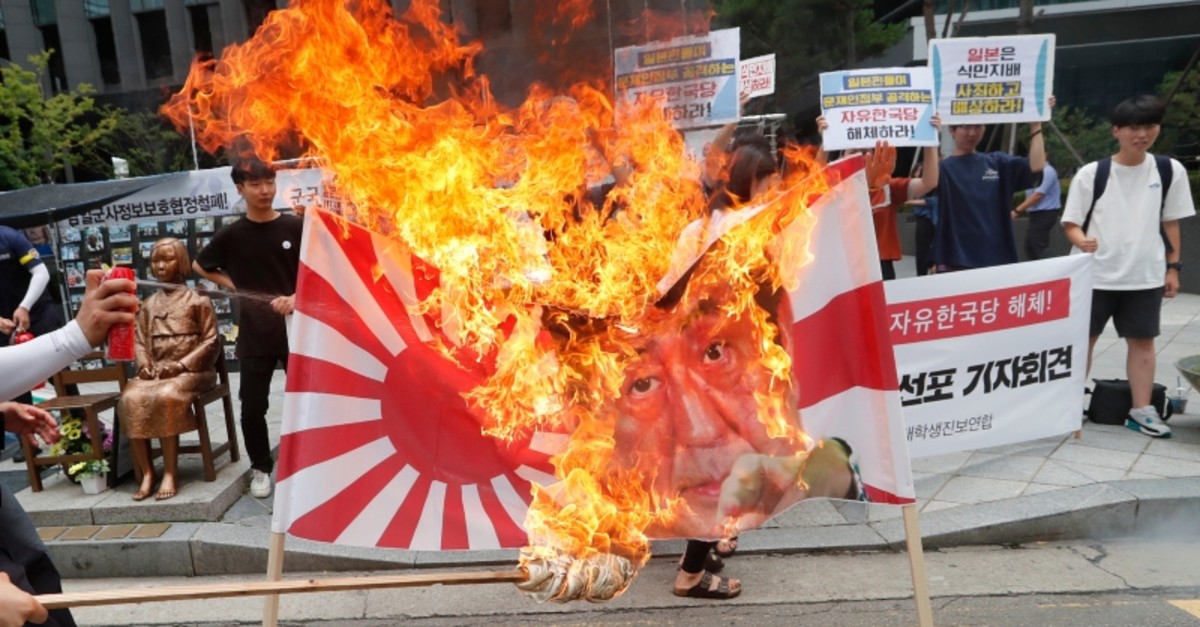 A 72-year-old South Korean man was in critical condition after setting himself ablaze in downtown Seoul on Thursday, apparently to express his anger toward Japan amid worsening tensions between countries over trade and wartime history, a police official said.

An official from Seoul's Jongno Police Station said the man was being treated at a Seoul hospital for burns over his entire body. The incident came a day before the Japanese government was widely expected to remove South Korea from a 27-country "whitelist" receiving preferential treatment in trade, which if carried out is likely to aggravate the dispute that sank bilateral relations to its lowest point in decades.

Police at the scene found a bag that likely belonged to the man and contained a memo and leaflet criticizing Japan over its decision to tighten controls on high-tech exports to South Korea and vowing to fight Tokyo until Japanese Prime Minister Shinzo Abe apologizes.

Also inside the bag was a book about the late Kim Bok-dong, who was one of the first victims to speak out and break decades of silence over the Japanese military's sexual slavery during World War II, according to the police official, who didn't want to be named, citing office rules.

The incident came weeks after a 78-year-old South Korean man died after self-immolating near the Japanese Embassy in Seoul. Police last month said the man had phoned an acquaintance earlier to say he planned to set himself on fire to express his antipathy toward Japan.

The dispute between South Korea and Japan erupted last month when Tokyo tightened controls on the exports of photoresists and two other chemicals to South Korean companies that use them to produce semiconductors and display screens for smartphones and TVs.

South Korea's removal from the Japanese preferential trade list could have a broader impact as it would require Japanese companies to apply for case-by-case approvals for exports to South Korea of hundreds of items deemed sensitive, not just the three materials affected by the trade curbs that took effect July 4. It will also allow Japanese authorities to restrict any export to South Korea when they believe there are security concerns.

South Korea's presidential office said President Moon Jae-in discussed issues surrounding the Japanese export controls with Cabinet ministers for more than two hours on Thursday, but didn't immediately reveal what was said. Following a meeting with Japanese Foreign Minister Taro Kono on the sidelines of the Association of Southeast Asian Nations meetings in Bangkok on Thursday, South Korean Foreign Minister Kang Kyung-wha told reporters that the Japanese side did not give a "firm answer" to South Korea's demands that the country remain on Japan's trade list.

Kang told reporters "there will be grave ramifications on bilateral relations" if South Korea is removed from Japan's list.

Kang and Kono are scheduled to meet U.S. Secretary of State Mike Pompeo in a three-way meeting on Friday, which will come after South Korean efforts to seek U.S. help in resolving its trade row with Japan.

Pompeo has said that the U.S. will "encourage them to find a path forward."

The deteriorating relationship between South Korea and Japan could possibly complicate U.S. efforts to strengthen three-way cooperation on North Korea's nuclear program and in countering China's growing influence in the region. But it's unclear how much the Trump administration would be willing to intervene.

"Whether it's mediation (by the United States) or a meeting of a certain kind, we are ready to positively consider a variety of measures," said a South Korean presidential official, who requested anonymity during a background briefing.

The Japanese trade measures have stoked public anger in South Korea, where many believe Japan still hasn't fully atoned for atrocities committed during its colonial occupation of Korea from 1910 to 1945. An increasing number of South Koreans have been boycotting Japanese consumer goods and travels to Japan.

Tokyo says the materials affected by the export controls can be sent only to trustworthy trading partners. Without presenting specific examples, it has questioned Seoul's credibility in controlling the exports of arms and items that can be used both for civilian and military purposes.