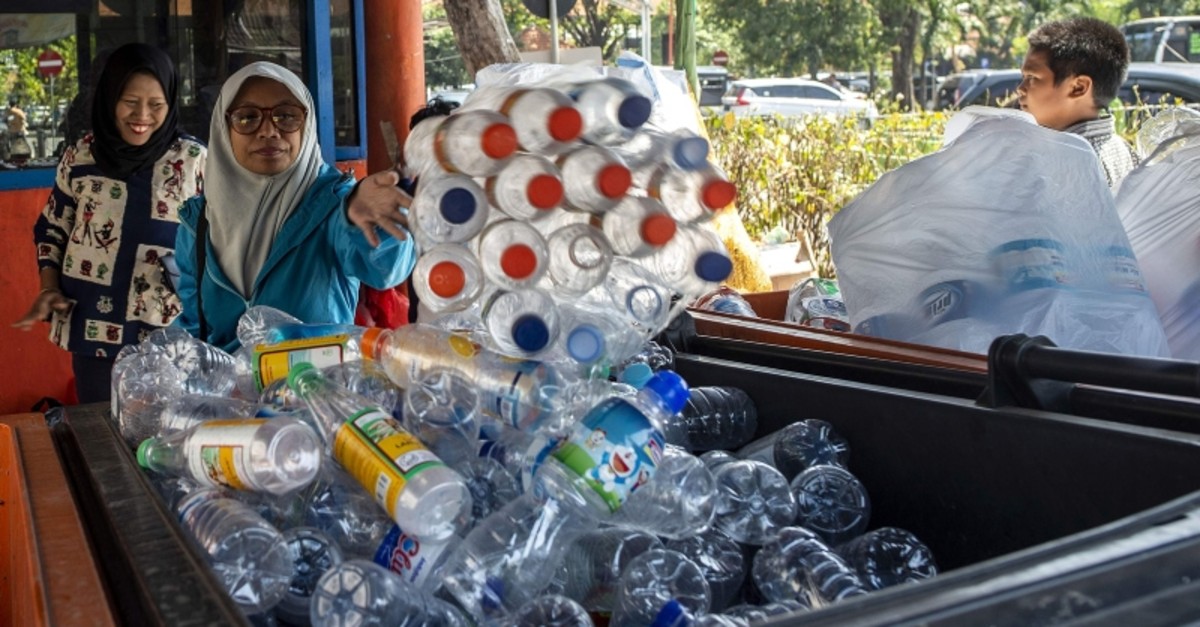 This picture taken on July 21, 2019 shows commuters exchanging plastic bottles for Suroboyo bus tickets at a terminal in the Indonesian city of Surabaya. (AFP Photo)
by Aug 09, 2019 12:01 pm

Dozens of people clutching bags full of plastic bottles and disposable cups queue at a busy bus terminal in the Indonesian city of Surabaya — where passengers can swap trash for travel tickets.

The nation is the world's second-biggest marine polluter behind China and has pledged to reduce plastic waste in its waters some 70 percent by 2025 by boosting recycling, raising public awareness, and curbing usage.

The Surabaya scheme has been a hit in the city of 2.9 million, with nearly 16,000 passengers trading trash for free travel each week, according to authorities.

"This is a very smart solution. It's free and instead of throwing away bottles people now collect them and bring them here," explains 48-year-old resident Fransiska Nugrahepi.

An hour-long bus ride with unlimited stops costs three large bottles, five medium bottles or 10 plastic cups. But they must be cleaned and cannot be squashed.

There is a steady stream of people squeezing past sacks full of recyclables to deposit plastic in four bins behind the small office and claim their tickets.

Franki Yuanus, a Surabaya transport official, says the program aims not only to cut waste but also to tackle traffic congestion by encouraging people to switch to public transit.

"There has been a good response from the public," insists Yuanus, adding: "Paying with plastic is one of the things that has made people enthusiastic because up until now plastic waste was just seen as useless."

Currently the fleet consists of 20 near-new buses, each with recycling bins and ticket officers who roam the aisles to collect any leftover bottles.

Authorities said roughly six tons of plastic rubbish are collected from passengers each month before being auctioned to recycling companies.

Nurhayati Anwar, who uses the bus about once a week with her three-year-old son, said the trash swap program is changing how people see their throwaway cups and bottles.

"Now people in the office or at home are trying to collect (rubbish) instead of just throwing it away," the 44-year-old accountant told AFP after trading in several bottles for a free ride.

"We now know that plastic is not good for the environment — people in Surabaya are starting to learn."

Other parts of Indonesia, an archipelago of some 17,000 islands, are also trying to tackle the issue.

Bali is phasing in a ban on single-use plastic straws and bags to rid the popular holiday island of waste choking its waterways, while authorities in the capital Jakarta are considering a similar bylaw to rid the city of plastic shopping bags.

Governments around the globe are increasingly taking measures to curb the menace of disposable plastic.

A 2016 report by the Ellen MacArthur Foundation warned there would be more plastic than fish, by weight, in the seas by 2050.

It added: "This is equivalent to dumping the contents of one garbage truck into the ocean every minute. If no action is taken, this is expected to increase to two per minute by 2030 and four per minute by 2050."