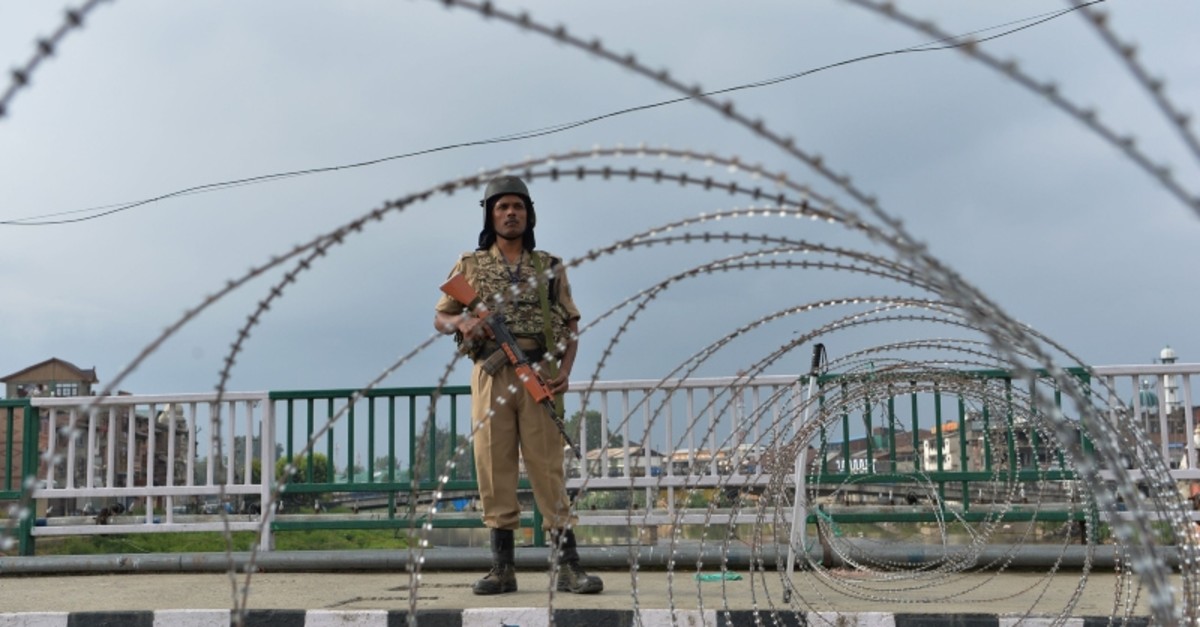 A security personnel stands guard on a street during a lockdown in Srinagar on August 11, 2019, after the Indian government stripped Jammu and Kashmir of its autonomy. (AFP Photo)
by Aug 11, 2019 9:21 pm

Indian authorities are expected to extend a military clampdown of Kashmir ahead of Monday's start of the Eid al-Adha festival on fears protests could break out over its stripping of the Muslim-majority region's autonomy.

Indian-administered Kashmir has been in a security lockdown since last Monday when India's Hindu-majority government rescinded years of autonomy and gave full control to New Delhi.

Officials eased restrictions earlier Sunday but imposed them again in the afternoon amid a tense atmosphere in the main city of Srinagar.

They are expected to keep security tight on Monday to block any big gatherings of people during Eid al-Adha, a major religious holiday for Muslims, sources told AFP in Srinagar.

Some 500 people took part in protests on Sunday but there were minimal injuries reported. Indian authorities have stressed that no violence has broken out in the picturesque valley.

Local leaders have warned the loss of autonomy could lead to unrest in a region that has mounted an armed insurgency against Indian rule for three decades, leading to tens of thousands of deaths.

The decision by New Delhi has also sparked fury in Pakistan, with Prime Minister Imran Khan asking earlier Sunday if the international community was just standing by as Indian Hindu nationalism spread into Muslim-majority Kashmir, saying it was the same as appeasing Hitler.

Kashmir has been split between India and Pakistan since the countries' independence in 1947, and they have fought two wars over the former kingdom.

Khan tweeted Sunday that the "ideology of Hindu Supremacy, like the Nazi Aryan Supremacy, will not stop" in Kashmir.

Describing the move as "the Hindu Supremacists version of Hitler's Lebensraum", he said it would lead to "the suppression of Muslims in India & eventually lead to targeting of Pakistan".

"Attempt is to change demography of Kashmir through ethnic cleansing," he tweeted. "Question is: Will the world watch & appease as they did Hitler at Munich?"

Khan also telephoned Iranian President Hassan Rouhani on Sunday "as part of his outreach to world leaders on the Kashmir situation," a statement issued by his office said.

"Muslims of Kashmir must be able to use their legal rights and interests to be able to live in peace," Rouhani was quoted as saying.

Officials said Khan would visit the Pakistan controlled part of Kashmir this week to show solidarity.

Tensions also remain fraught in the mountainous Ladakh region, where a local activist told AFP dozens of protesters took part in rallies on Thursday, Friday and Saturday, with at least 10 people injured by security forces using tear gas and sticks.

Residents in Indian-controlled Kashmir, meanwhile, said they were struggling to prepare for Eid because of the security crackdown.

A mother who gave her name as Razia said she tried to explain to her daughter that she would not be able to buy her clothes to mark the occasion, as her husband fretted about feeding the family.

"What sort of Eid is this?" asked the 45-year-old in Srinagar.

"We are not even allowed to move outside. My husband is a daily wage laborer but hasn't made any money for the last eight days."

A sheep trader at a Srinagar market, who gave his name as Maqbool, said the number of people buying sacrificial animals for the holiday was sharply lower and he had gone from "huge profits" to a "big loss" this year.

Indian premier Modi insisted last week the decision to strip Kashmir of its autonomy was necessary for its economic development, and also to stop "terrorism".

He said with Kashmir now fully part of the Indian union, the region would enjoy more jobs and less corruption and red tape, adding that key infrastructure projects would be expedited.

Previously, under its constitutional autonomy, Kashmiris enjoyed special privileges such as the sole right to own land or take government jobs and university scholarships.

Islamabad has been infuriated by New Delhi's moves and has expelled the Indian ambassador, halted what little bilateral trade exists and suspended cross-border transport services.