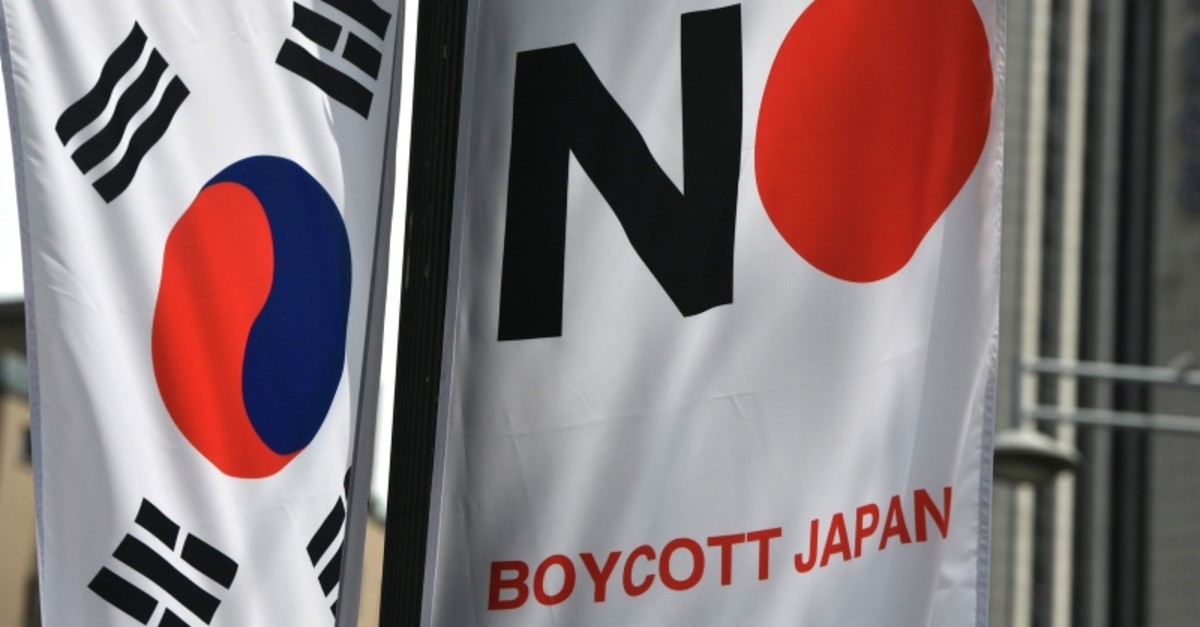 A South Korean flag (L) and a banner (R) that reads ,Boycott Japan, hangs along a street in Seoul's Jung-gu district on August 6, 2019. (AFP Photo)
by Associated Press Aug 12, 2019 1:49 pm
South Korea said Monday that it has decided to remove Japan from a list of nations receiving preferential treatment in trade in what was seen as a tit-for-tat move following Tokyo's recent decision to downgrade Seoul's trade status amid a diplomatic row.

It wasn't immediately clear how South Korea's tightened export controls would impact bilateral trade. Seoul said some South Korean companies exporting to Japan will be able to receive exceptions from case-by-case inspections that are normally applied on sensitive shipments to nations with lower trade status and go through the same fast-track approval process that they currently enjoy.

Japan provided similar exceptions while removing South Korea as a favored trade partner, which eased some of the fears in Seoul about a possible blow to its export-dependent economy, where many manufacturers heavily rely on parts and materials imported from Japan.

After spending weeks berating Tokyo for allegedly weaponizing trade and vowing retaliation, South Korean President Moon Jae-in struck a more conciliatory tone on Monday, saying that his government will refrain from "emotional" reactions to Japan over the trade dispute.

"While maintaining unwavering resolve and calmness, we need a long-term approach to look for fundamental countermeasures," Moon said in a meeting with senior aides.

South Korea's trade minister, Sung Yun-mo, said Seoul decided to remove Japan from a 29-member "white list" of countries that enjoy minimum restrictions in trade because it has failed to uphold international principles while managing its export controls on sensitive materials. Sung and other South Korean officials did not specify what they saw as Tokyo's problems in export controls.

South Korea currently divides its trade partners into two groups while managing the exports of sensitive materials that can be used both for civilian and military purposes. Seoul will create a new in-between bracket where it plans to place only Japan, which "in principle" will receive the same treatment as the non-favored nations in what's now the second group, Sung said.

South Korean officials didn't clearly explain why they created a special bracket for Japan instead of grouping it with other non-favored nations. They said Seoul will work to minimize negative impact on South Korean exporters and bilateral trade.

Sung said the changes are expected to enter effect sometime in September, following a 20-day period for gathering public opinion on the issue and further regulatory and legal reviews. He said Seoul is willing to accept any request by Tokyo for consultation over the issue during the opinion-gathering period, but officials didn't say whether Seoul's decision will be negotiable.

Seoul says Tokyo is using trade to retaliate over South Korean court rulings that called for Japanese companies to compensate aging South Korean plaintiffs for forced labor during World War II and plans to file a complaint with the World Trade Organization.

Japan's move came weeks after it imposed stricter controls on certain technology exports to South Korean companies that rely on Japanese materials to produce semiconductors and displays for TVs and smartphones, which are key South Korean export items.