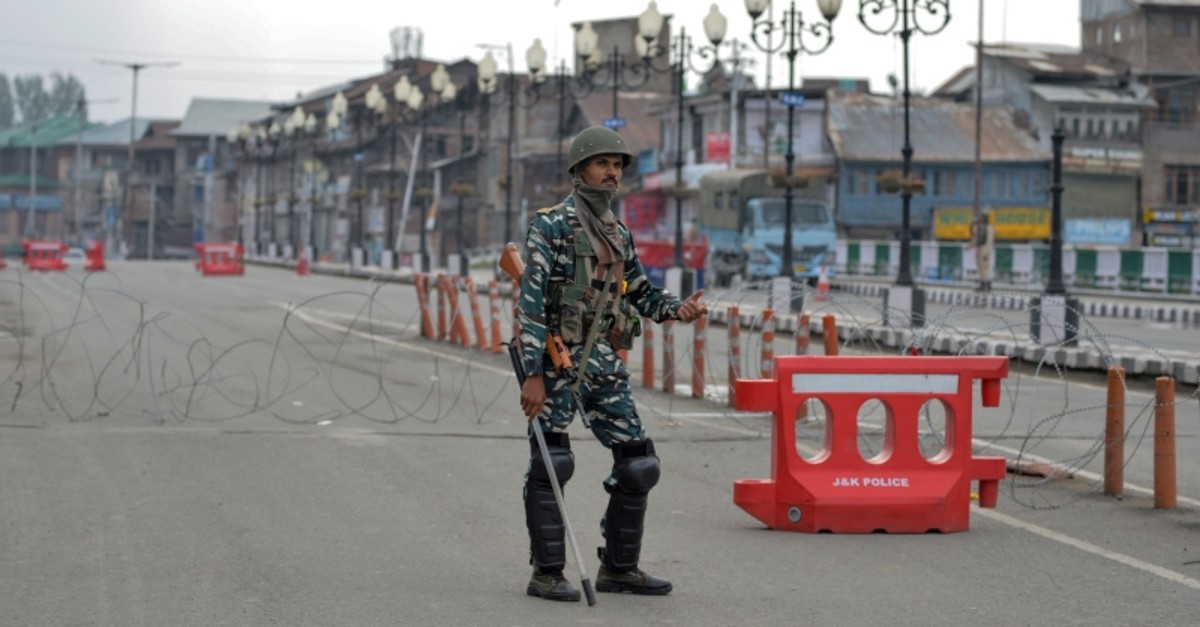 A security personnel stands guard along a street during a lockdown in Srinagar on August 15, 2019, as India celebrates its 73rd Independence Day, which marks the end of British colonial rule. (AFP Photo)
by Compiled from Wire Services Aug 15, 2019 4:52 pm

Pakistan said on Thursday three of its soldiers and five Indian troops were killed in cross-border exchange of fire in the contested Kashmir region, one of the deadliest clashes between the rival armies this year.

Indian forces have increased firing along the contested border known as the Line of Control (LOC), Major General Asif Ghafoor, the chief spokesman of the Pakistan armed forces, said in a tweet. "Intermittent exchange of fire continues," Ghafoor tweeted.

Indian troops fired artillery across the LoC dividing the Himalayan valley into territories controlled by the two countries, resulting in the death of the Pakistani soldiers, the army said in a statement. Pakistani troops returned fire, killing five Indian soldiers and damaging Indian bunkers.

The police and military said three Pakistani soldiers were killed when Indian troops targeted their post in Leepa town along the Line of Control, and two civilians died when mortars fired by India hit a village in Poonch town.

A senior local official also told AFP that two civilians were killed and one injured by the Indian troops along the LoC in Rawalakot district in Pakistani-held Kashmir. Mirza Arshad Jarral said intermittent exchanges of fire between the two militaries had been going on since morning.

An Indian army spokesman denied casualties on the Indian side. "No casualties. This assertion is wrong," the spokesman said. In a statement, the Indian army said that from around 0700 local time Pakistan violated a ceasefire between the two nations.

Though such clashes are relatively common between the nuclear-armed neighbors, Thursday's incident comes just days after the Indian government stripped the Muslim-majority region of its special constitutional autonomy, angering Pakistan which also has claims on the region.

The former princely state of Kashmir was divided between Pakistan and India on their independence from Britain in 1947. They have fought two of their three wars over the territory -- though none since both countries acquired nuclear weapons. Earlier this year Pakistan and India came close to all-out conflict yet again, after a militant attack in Indian-held Kashmir in February was claimed by a group based in Pakistan, igniting tit-for-tat airstrikes.

On Wednesday, Pakistani Prime Minister Imran Khan addressed the local legislative assembly of the Pakistani-administered Kashmir in Muzaffarabad. He vowed the time had come to teach New Delhi a lesson and promised to "fight until the end" against any Indian aggression. Khan has also likened India's moves in Kashmir to Nazi Germany, accused them of ethnic cleansing, and appealed to the international community to take action.

In a speech marking India's Independence Day on Thursday, Indian Premier Narendra Modi defended the move to strip Kashmir of its autonomy, arguing that the special status had only encouraged separatism, terrorism and corruption in the region. India blames Pakistan for aiding and abetting Kashmiri militants, a charge Islamabad denies.

"The spirit of one nation, one Constitution has become a reality now. And India is proud of it," Modi said. His Hindu nationalist Bharatiya Janata Party (BJP) has opposed the special status for the state for decades and had pledged to abolish it as part of the party's recent election manifesto. Modi said the region could make an important contribution to India's development. "Let us all make efforts to restore the region to its past glory," he added. He made no mention of the lockdown and communications blackout in the troubled region.

"We do not believe in creating problems or prolonging them. In less than 70 days of the new government, Article 370 has become history. And in both houses of parliament, two-thirds of the members supported this step," said Modi, 68.

"The old arrangement in Jammu, Kashmir and Ladakh encouraged corruption and nepotism, as well as injustice when it came to rights of women, children, (low-caste) Dalits, tribal communities," he said.

"Their dreams get new wings," he said.

Tens of thousands of people angered by the decision to alter the status of Kashmir rallied across Pakistan as Islamabad called for Indian Independence Day to be observed as a "black day." The protesters were carrying black flags, banners and placards with anti-Modi slogans. There were also rallies in major cities in Pakistani Kashmir, where members of families divided by the Line of Control marched to condemn Modi and the end to Kashmir's special status.

The Aug. 5 decision by India scraps Article 370 in the Indian constitution that had granted Kashmir special autonomy, splitting the state of Jammu and Kashmir in two and downgrading their status to union territories. The move also blocks the right of the state of Jammu and Kashmir to frame its own laws and allows non-residents to buy property there. Telephone lines, internet and television networks have been blocked and there are restrictions on movement and assembly.

Fearing unrest over India's latest move, tens of thousands of extra Indian troops have been deployed to Kashmir -- joining 500,000 already there -- turning parts of the main city of Srinagar into a fortress of roadblocks and barbed wire.

Sher-i-Kashmir Cricket Stadium, where the main Independence Day ceremonies were held in Srinagar, was cordoned off by security personnel, with drones and helicopters monitoring the area. Jammu and Kashmir governor Satya Pal Malik hoisted an Indian flag and inspected a police guard of honor, watched by India's national security adviser, Ajit Doval. There were few locals at the ceremony, with most of the spectators from the government or security forces, an AFP reporter in Srinagar said. Hundreds of artists and students from Hindu-majority Jammu, a major city south of Srinagar, were ferried in on buses and planes to perform at the function. Kashmiri politicians were missing from the event. The politicians, alongside university professors, business leaders and activists, are among more than 500 people taken into custody in the region.

"Restrictions will continue in some places of Kashmir for some time," local police official Munir Khan told Indian media.

In some neighborhoods, residents observed Pakistan's Independence, officially marked a day earlier, by setting off firecrackers and hoisting its national flag.

Pakistan formally asked the United Nations Security Council late Tuesday to hold an emergency session to address the situation. The council is due to meet behind closed-doors on Friday at the request of China and Pakistan to discuss India's decision to revoke the special status of Jammu and Kashmir, diplomats said. Any action by the 15-member council is unlikely as the United States traditionally backs India and China supports Pakistan.

"Pakistan will not provoke a conflict. But India should not mistake our restraint for weakness," Pakistan's Foreign Minister Shah Mahmood Qureshi wrote in a letter to the Security Council on Tuesday. "If India chooses to resort again to the use of force, Pakistan will be obliged to respond, in self-defense, with all its capabilities."

U.N. Secretary-General Antonio Guterres has called on India and Pakistan to refrain from any steps that could affect the special status of Jammu and Kashmir. Guterres also said he was concerned about reports of restrictions on the Indian side of Kashmir.

The Security Council adopted several resolutions in 1948 and in the 1950s on the dispute between India and Pakistan over the region, including one which says a plebiscite should be held to determine the future of the mostly Muslim Kashmir.

Another resolution also calls upon both sides to "refrain from making any statements and from doing or causing to be done or permitting any acts which might aggravate the situation."

U.N. peacekeepers have been deployed since 1949 to observe a ceasefire between India and Pakistan in Jammu and Kashmir.