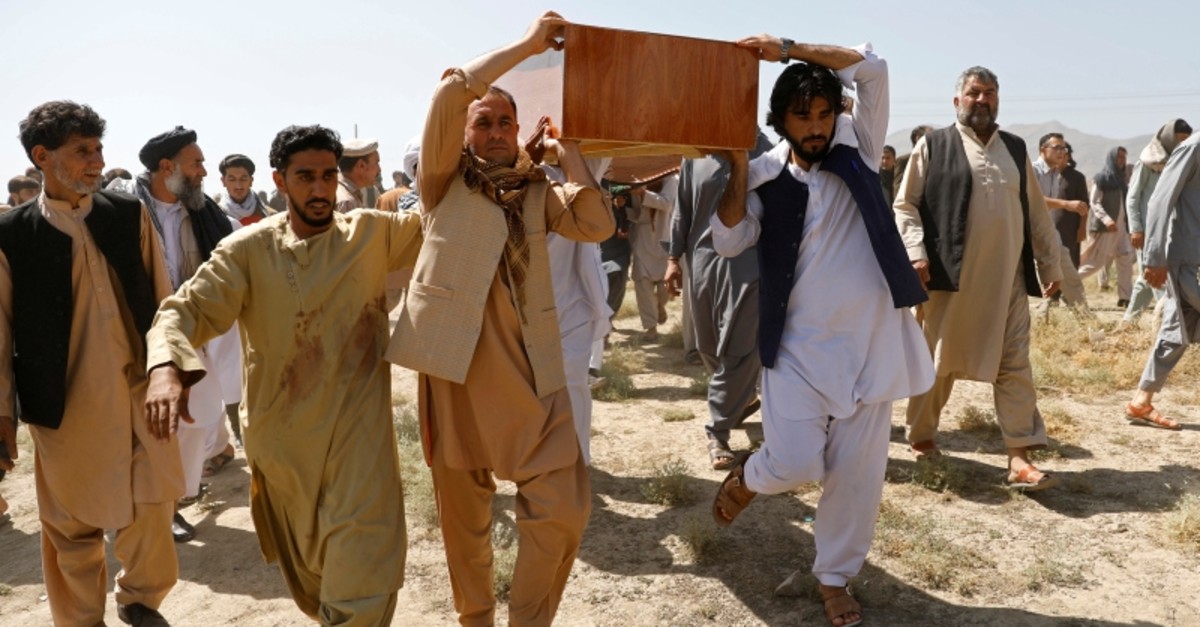 The local Daesh terror group affiliate claimed responsibility for the deadliest attack in the capital this year, with 182 more wounded, while outraged Afghans questioned just how safe they will be under an approaching deal between the United States and the Taliban to end America's longest war.

The groom, who only gave his name as Mirwais, recalled greeting smiling guests in the afternoon, before seeing their bodies being carried out hours later.

"My family, my bride are in shock, they cannot even speak. My bride keeps fainting," he said.

"I lost my brother, I lost my friends, I lost my relatives. I will never see happiness in my life again."

Interior ministry spokesman Nasrat Rahimi said at least 63 people had been killed and 182 injured. "Among the wounded are women and children," Rahimi said. Earlier he stated that the blast was caused by a suicide bomber.

Afghan weddings are epic and vibrant affairs, with hundreds or often thousands of guests celebrating for hours inside industrial-scale wedding halls where the men are usually segregated from the women and children.

"The wedding guests were dancing and celebrating the party when the blast happened," recounted Munir Ahmad, 23, who was seriously injured and whose cousin was among the dead.

"Following the explosion, there was total chaos. Everyone was screaming and crying for their loved ones," he told AFP from his bed in a local hospital, where he is being treated for shrapnel wounds.

In the aftermath, images from inside the hall showed blood-stained bodies on the ground along with pieces of flesh and torn clothes, hats, sandals and bottles of mineral water.

Wedding guest Mohammad Farhag told AFP he was in the women's section when he heard a huge blast in the men's area.

"Everyone ran outside shouting and crying," he said.

"For about 20 minutes the hall was full of smoke. Almost everyone in the men's section is either dead or wounded."

One guest who spoke to Tolo said some 1,200 people had been invited.

The attack sent a wave of grief through a city grimly accustomed to atrocities. President Ashraf Ghani called the incident a "barbaric attack", while Afghanistan's chief executive Abdullah Abdullah described it as a "crime against humanity."

The emergence of the Daesh affiliate in recent years might be the greatest threat to Afghan civilians as the U.S. and Taliban seek an agreement to end nearly 18 years of fighting. While the U.S. wants Taliban assurances that Afghanistan will no longer be used as a launch pad for global terror attacks, there appear to be no guarantees of protection for Afghan civilians.

The Taliban, which the U.S. hopes will help curb the Daesh affiliate's rise, condemned Saturday's attack as "forbidden and unjustifiable."

The blast took place in a western Kabul neighborhood that is home to many in the country's minority Shiite Hazara community. Daesh, which declared war on Afghanistan's Shiites nearly two years ago and has claimed responsibility for many attacks targeting them in the past, said in a statement that a Pakistani Daesh fighter seeking martyrdom targeted a large Shiite gathering.

The blast at the wedding hall, known as Dubai City, shattered a period of relative calm in Kabul.

On Aug. 7, a Taliban car bomber aimed at Afghan security forces detonated his explosives on the same road, a short drive from the hall, killing 14 people and wounding 145 — most of them women, children and other civilians.

The explosion came just ahead of Afghanistan's 100th Independence Day on Monday. The city, long familiar with checkpoints and razor wire, has been under heavier security. A planned event in Kabul marking the anniversary was postponed because of the attack, the president's office said.

The attack also comes at a greatly uncertain time in Afghanistan as the U.S. and the Taliban appear to be within days of a deal on ending the war after several rounds of talks this year. Afghanistan's government has been sidelined in those talks as the Taliban refuse to negotiate with what it calls a U.S. puppet.

Top issues in the talks have included a U.S. troop withdrawal and Taliban guarantees they would not allow Afghanistan to become a launching pad for global terror attacks. In that, the Daesh affiliate's increasingly threatening presence is the top U.S. concern. Other issues include a cease fire and intra-Afghan negotiations on the country's future.

Many Afghans fear that terror attacks inside the country will continue, and their pleas for peace — and for details on the talks — have increased in recent days. Few appear to believe that the Taliban will step in to protect civilians from Daesh or anyone else after years of killing civilians themselves.

"Taliban cannot absolve themselves of blame, for they provide platform for terrorists," President Ashraf Ghani said on Twitter, declaring a day of mourning and calling the attack "inhumane."

Frustration at the authorities was evident as well, amid a fresh wave of grief.

"We want the government to stop arguing about power and act like a human being to bring peace to this country," one worker at the wedding hall, Hajji Reza, said. Several of his colleagues remained missing.