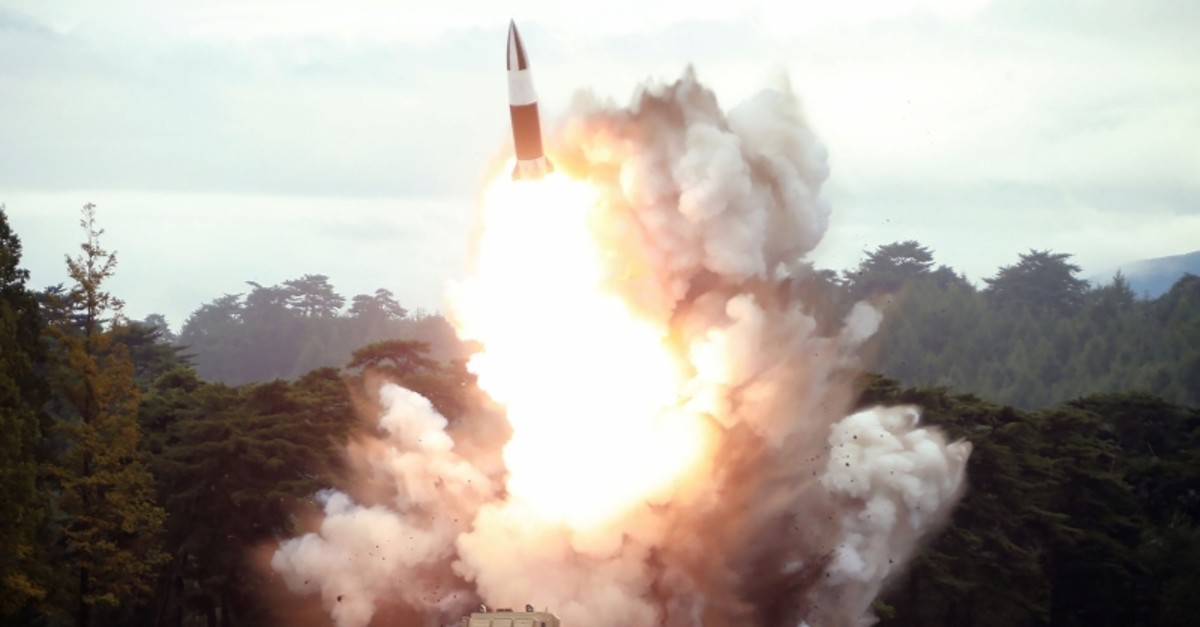 This picture taken on August 16, 2019 and released on August 17 by North Korea's KCNA shows the test-firing of a new weapon, presumed to be a short-range ballistic missile, at an undisclosed location. (AFP Photo)
by Associated Press Aug 24, 2019 2:26 am

North Korea fired two suspected short-range ballistic missiles off its east coast on Saturday in the seventh weapons launch in a month, South Korea's military said, a day after it vowed to remain America's biggest threat in protest of U.S.-led sanctions on the country.

The North had been expected to halt weapons tests because the 10-day U.S.-South Korean drills, which it views as an invasion rehearsal, ended earlier this week.

"Kim Jong Un has been, you know, pretty straight with me. ... He likes testing missiles but we never restricted short-range missiles. We'll see what happens," Trump told reporters outside the White House late Friday night.

Saturday's launches were made from northeastern South Hamgyong province, South Korea's Joint Chiefs of Staff said. They flew about 380 kilometers (236 miles) at the maximum altitude of 97 kilometers (60 miles), the military said.

The Japanese government said the suspected missiles caused no damage and did not land in its territorial waters.

North Korea's foreign minister said Friday his country will try to remain "America's biggest threat" if the United States continues to confront it with sanctions. Foreign Minister Ri Yong Ho also called U.S. Secretary of State Mike Pompeo a "poisonous plant of American diplomacy" and vowed to "shutter the absurd dream" that sanctions will force a change in Pyongyang.

Ri's blistering rhetoric and the missile launches may dim the prospect for an early resumption of nuclear negotiations between the countries. The top U.S. envoy on North Korea, Stephen Biegun, said Wednesday that Washington was ready to restart the talks.

North Korea's anger over the U.S.-South Korean military drills had focused on South Korea, not the United States. Starting in late July, North Korea has tested a slew of weapons, mostly short-range missiles and rockets. Some of the weapons revealed developments of a new rocket artillery system and two different short-range mobile ballistic missiles that experts say would expand its ability to strike targets throughout South Korea.

Many analysts said the tests were aimed at applying more pressure on the United States ahead of a possible resumption of nuclear talks.

U.S.-led diplomacy to rid North Korea of nuclear weapons collapsed after Trump rejected North Korean leader Kim Jong Un's demand for widespread sanctions relief in return for partial disarmament steps during their second summit in Vietnam in February. Trump and Kim met again at the Korean border in late June and agreed to resume the talks.

Saturday's launches came two days after South Korea said it would terminate a military intelligence-sharing deal with Japan amid bitter trade and history disputes between the U.S. allies.

The decision drew criticism that it would end up weakening South Korea's defense and reconnaissance capability at a time when North Korea's nuclear threats remain intact. The United States, which wants stronger trilateral security cooperation with Seoul and Tokyo, expressed disappointment at the South Korean decision.

South Korea's military said it will share information on the latest North Korean launches with Japan at Tokyo's request as the intelligence deal is valid until November.