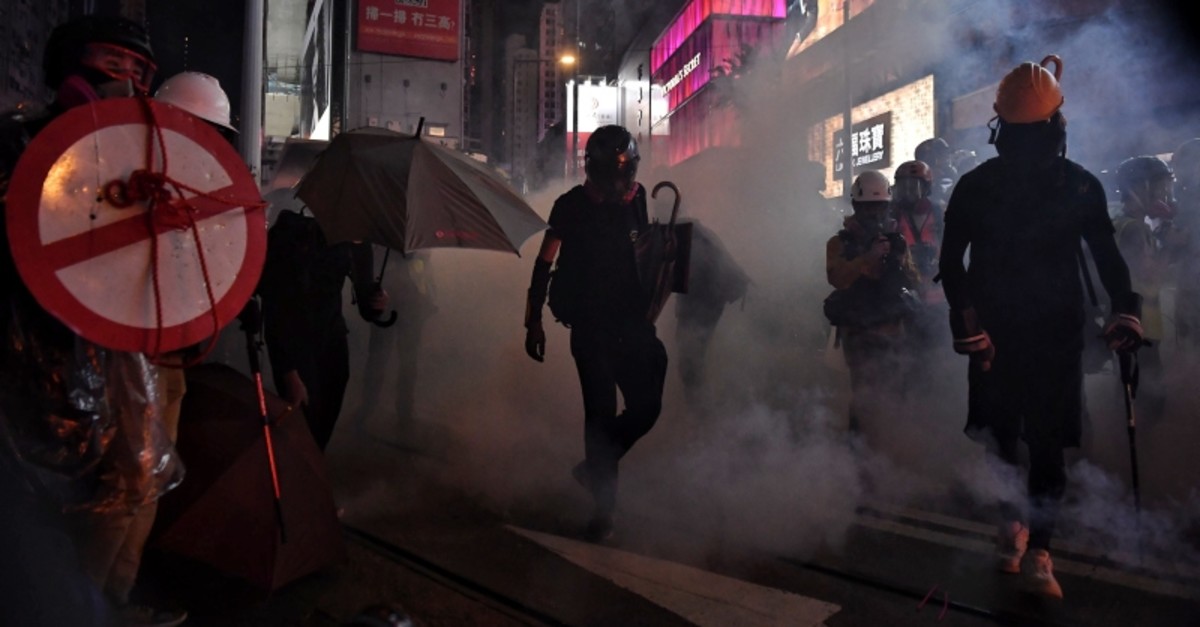 Chaos engulfed the heart of Hong Kong late Saturday, as police fired tear gas and water cannon at pro-democracy protesters who defied a ban on rallying, set fires, and hurled petrol bombs in some of the most intense clashes in months.

Police had banned the demonstration on security grounds, and on Friday arrested several key activists and legislators in a dragnet on pro-democracy figures.

But on Saturday afternoon tens of thousands of protesters under a colourful canopy of umbrellas -- many in their signature black T-shirts -- defied the order and marched through Hong Kong island chanting "reclaim Hong Kong, revolution of our times".

As evening fell, violence ricocheted through the city's commercial center, with a minority of hardcore protesters unleashing a barrage of petrol bombs and rocks at riot police.

Thick, black smoke swirled from a large fire started by masked demonstrators at a barricade on a major thoroughfare, close to Hong Kong police headquarters.

The fire was extinguished as demonstrators were pressed into the neon-lit shopping hub of Causeway Bay, under a hail of tear-gas rounds and sporadic firing of rubber bullets.

Police -- some undercover, dressed as protesters -- made numerous arrests as the night deepened into a cat-and-mouse chase across the city.

Ryan, a 19-year-old protester, needed first aid after he was hit by what he believed to be a rubber bullet.

"I needed an ice pack for the wound," Ryan told AFP. "But I feel ok, think I will continue the fight tonight," he said.

Video on social media showed people -- believed to be protesters -- being arrested en masse inside a train carriage at a metro station as they left demonstrations. Police later confirmed the arrest of "radical protesters" at two city stations.

The months-long protests were sparked by an attempt by Hong Kong's Beijing-backed government to pass a bill which would have allowed extradition to China.

But they have expanded into a wider pro-democracy push and a rejection of attempts by Beijing to curtail the freedoms of the semi-autonomous territory.

Earlier on Saturday, police fired a water cannon and rounds of tear gas to disperse protesters massed in front of the city's parliament, known as the Legislative Council (LegCo), which was stormed in July during the early days of the protest movement.

As protesters streamed into a nearby metro, graffiti on a pillar inside the station read: "We shall never surrender."

It was the latest salvo in a campaign of intimidation aimed at protesters in the southern city.

Beijing has also unleashed a mix of propaganda and economic muscle in an attempt to constrict the movement, which it views as a direct challenge to its rule.

Opposition to the extradition bill -- now suspended but not permanently withdrawn -- has brought much of Hong Kong to the streets, with millions marching peacefully but also groups of radical protesters clashing with police.

Protesters were in a defiant mood throughout Saturday, which marked the fifth anniversary of Beijing's rejection of a call for universal suffrage for Hong Kong that sparked the 79-day "Umbrella Movement" in 2014.

Many demonstrators are determined not to let the new movement fizzle out like the Umbrella protests did.

"It's 'now or never' for Hong Kong," said a 33-year-old accountant who gave her surname as Wong.

"I'm a mother-of-two. They didn't come today but their grandmother did. We're defending the right of assembly for the next generation in Hong Kong."

Hong Kong police said in a statement that "radical protesters" threw "corrosives and petrol bombs" at officers, "posing a serious threat to the safety of everyone".

At least five high-profile activists and three lawmakers were arrested on Friday in a sweep that rights groups said was taken directly from Beijing's playbook.

Two of the Umbrella Movement's leaders, Joshua Wong and Agnes Chow were among those arrested, charged and bailed for "inciting others to take part in unauthorized assembly".

Police denied the sweep was timed specifically to weaken the weekend's protests.

More than 900 people have been arrested since June in connection to protests.

The European Union's diplomatic chief Federica Mogherini said the developments were "extremely worrying", while US President Donald Trump said his economic pressure on China was forcing Beijing to take a more moderate line on Hong Kong.

The weeks of violence have damaged Hong Kong's reputation for stability and prosperity.

In an attempt to sidestep Saturday's protest ban, crowds earlier sang "Hallelujah" in religious gatherings -- which do not require the same stringent permission from authorities.