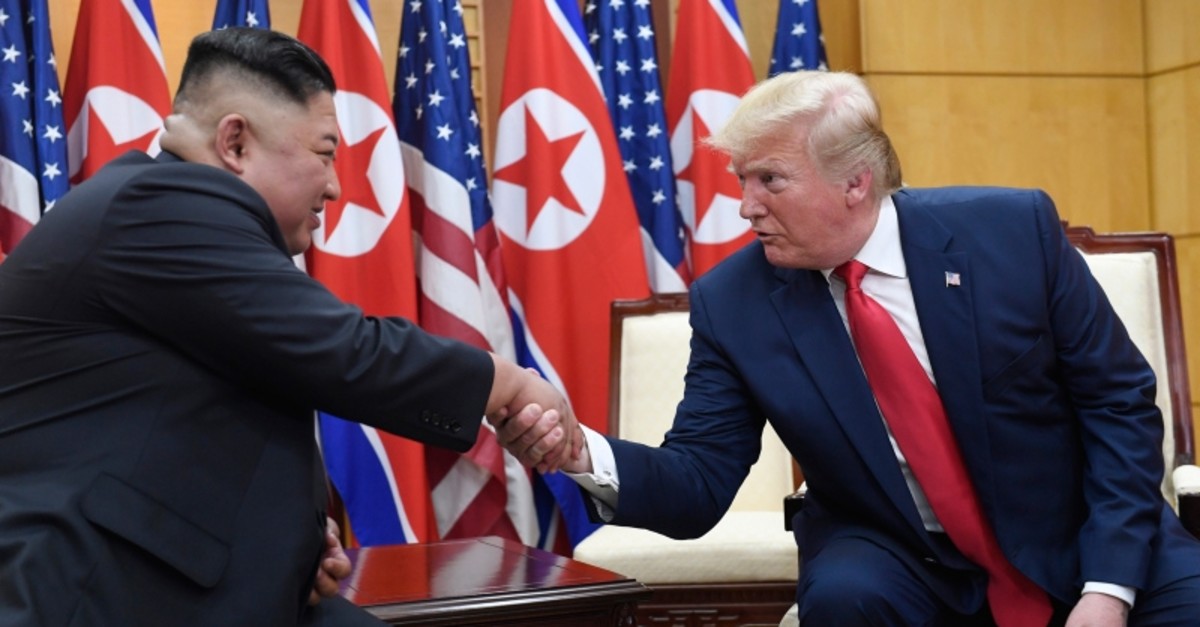 North Korea accused the United States on Friday of failing to follow through on summit agreements between U.S. President Donald Trump and the country's leader, Kim Jong Un, but said it is placing hope in the U.S. president's "wise option and bold decision."

"It draws my keen interest that it is highly topical these days in the U.S. to hold another DPRK-U.S. summit," the adviser said, using the initials of the country's official name, the Democratic People's Republic of Korea.

But he was critical of U.S. inaction since the summits.

While past summits were "historic occasions" for the two leaders "to express their political will to put an end to the hostile relations between the two countries and have peace and stability settled on the Korean peninsula," Kim Kye Gwan said "no practical follow-up was made to implement the issues agreed upon at the summit talks."

The Foreign Ministry adviser said North Korea "has made sincere efforts to build trust" and execute the joint Washington-Pyongyang statement issued after the first summit between Kim and Trump in Singapore last year. He pointed to North Korea's repatriation of American detainees "who committed hostile acts" against the country and the return of remains of soldiers killed during the 1950-53 Korean War.

"However, the U.S. has done nothing for implementing the joint statement," the North Korean official said.

On the contrary, he cited the resumption of U.S.-South Korean military drills "which the U.S. president personally pledged to suspend," and the ratcheting up of U.S. sanctions against the North.

Kim Kye Gwan said it is "hard reality" that politicians in Washington are obsessed with "nuclear disarmament first" by North Korea before sanctions can be lifted and the country "can get access to a bright future." The adviser said this makes him doubt whether "a new breakthrough" could take place in U.S.-North Korean relations through another summit.

But he left a door open.

"I came to know that President Trump is different from his predecessors in political sense and decision while watching his approach to the DPRK, so I would like to place my hope on president Trump's wise option and bold decision," he said.

Chinese Foreign Minister Wang Yi, speaking at the U.N. meetings, said that North Korea "has demonstrated a readiness to promote dialogue. It is hoped the U.S. can meet the DPRK halfway."

In his mid-70s, Kim Kye Gwan is a veteran diplomat who led the North Korean delegation at much of the now-dormant six-nation nuclear disarmament talks held in Beijing in 2003-2008.

His statement was issued during the annual meeting of world leaders at the U.N. General Assembly, where North Korea-U.S. relations, which made headlines last year, have been relegated to the background.

In his speech to the global gathering on Tuesday, Trump briefly mentioned North Korea, saying the United States has pursued "bold diplomacy on the Korean Peninsula."

"I have told Kim Jong Un what I truly believe: that, like Iran, his country is full of tremendous untapped potential, but that to realize that promise, North Korea must denuclearize," the U.S. president said.

Last year, North Korea's foreign minister represented his nation at the General Assembly meeting. Without any explanation, North Korea downgraded its presence this year from a minister to the "chief of delegation," usually the country's ambassador.

The Pyongyang representative will speak to the 193-member world body on Monday at the General Assembly's final ministerial session.

North Korea entered talks with the United States last year, saying it was willing to negotiate away its advancing nuclear arsenal in exchange for U.S. security guarantee and sanctions relief.

The North wants a step-by-step disarmament process, in which each of its denuclearization steps is matched by a corresponding U.S. reward. The United States says sanctions on North Korea will remain in place until the country takes significant steps toward denuclearization.

During the Singapore summit, Kim Jong Un promised to work toward complete denuclearization of the Korean Peninsula without providing any timetable or roadmap for disarmament steps. In Singapore, Kim and Trump also agreed to establish new bilateral relations and build a lasting peace on the Korean Peninsula.

They met again in Vietnam in February for a second summit. But that meeting abruptly fell apart after Trump rejected Kim's request for extensive relief of sanctions in return for dismantling his main nuclear complex, a limited denuclearization step. The two leaders held a brief, impromptu meeting at the Korean border in late June, and agreed to restart talks.

Last week, North Korea's Foreign Ministry said working-level nuclear talks with the United States could resume in a few weeks. But it said discussions of North Korea's denuclearization will only be possible when "threats and hurdles endangering our system security and obstructing our development are clearly removed beyond all doubt."