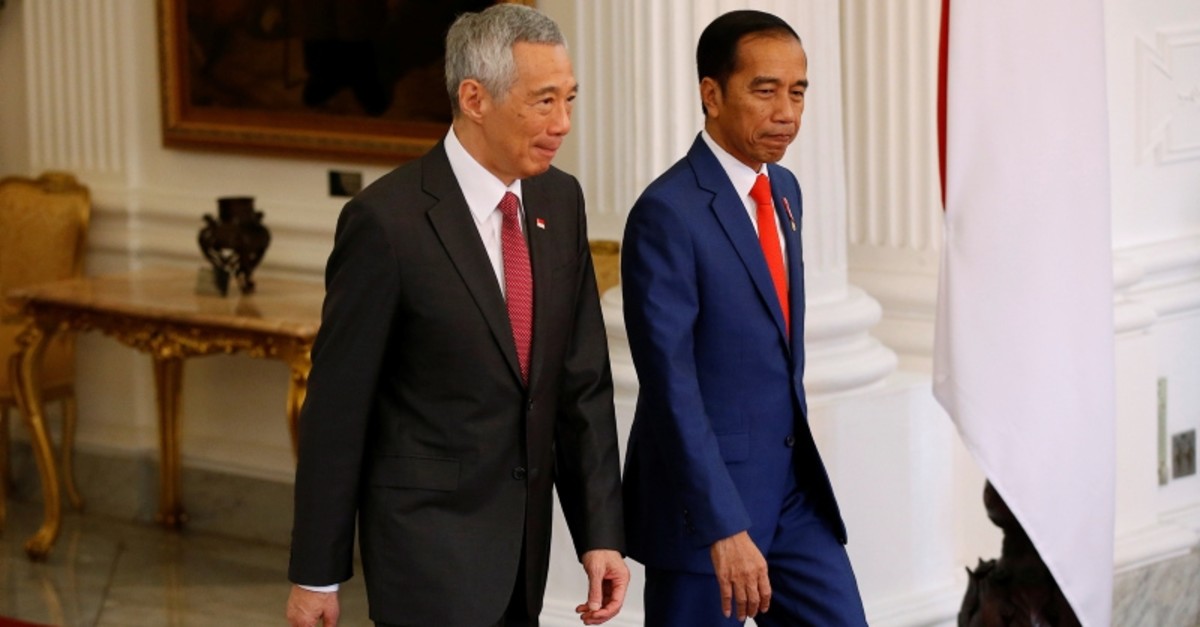 Singapore's Prime Minister Lee Hsien Loong and Indonesian president Joko Widodo walk during their meeting ahead of the inauguration for the second term of Widodo at the Presidential Palace in Jakarta, Indonesia, October 20, 2019. (Reuters Photo)
by Compiled from Wire Services Oct 20, 2019 12:32 pm

Indonesian President Joko Widodo was sworn in on Sunday for a second five-year term as president, leading the world's third-biggest democracy after a first term marked by heavy infrastructure spending.

Ma'ruf Amin was sworn in as vice president.

In his second and final term, Widodo, a former furniture salesman from outside the military and political elite, has pledged to attract more investment into Southeast Asia's biggest economy and focus on improving the country's human resources.

He was sworn in at parliament under tight security, with more than 30,000 security personnel deployed in Jakarta following recent student demonstrations and after the country's security minister was stabbed this month.

Known for his down-to-earth style, Widodo, 58, opted for an austere ceremony at the heavily guarded Parliament without the grand parade that transported him after the inauguration five years ago on a horse-drawn carriage in downtown Jakarta as he was cheered on by thousands of waving supporters.

"This is the second time ... most importantly, we must work together immediately to bring Indonesia to prosperity," Widodo told reporters before leaving for Parliament, adding without elaborating that he has completed picking all members of his Cabinet.

Western and Asian leaders and special envoys flew in for the event, including Australian Prime Minister Scott Morrison and Chinese Vice President Wang Qishan. President Donald Trump sent Secretary of Transportation Elaine Chao for the ceremony in Indonesia, Southeast Asia's largest economy and a member of the G-20 bloc of nations.

Popularly known as Jokowi, Widodo is the son of a furniture maker who grew up with his family in a rented bamboo shack on the banks of a flood-prone river in Solo city on Java island. He is the first Indonesian president from outside the country's super rich, and often corrupt, political, business and military elite.

Widodo presents himself as a man of the people, often emphasizing his humble roots. His popular appeal, including his pioneering use of social media, helped him win elections for mayor of Solo, governor of Jakarta and twice for president over the past 14 years. In a reflection of his popularity as he begins his second term, he has nearly 26 million followers on Instagram and more than 12 million on Twitter.