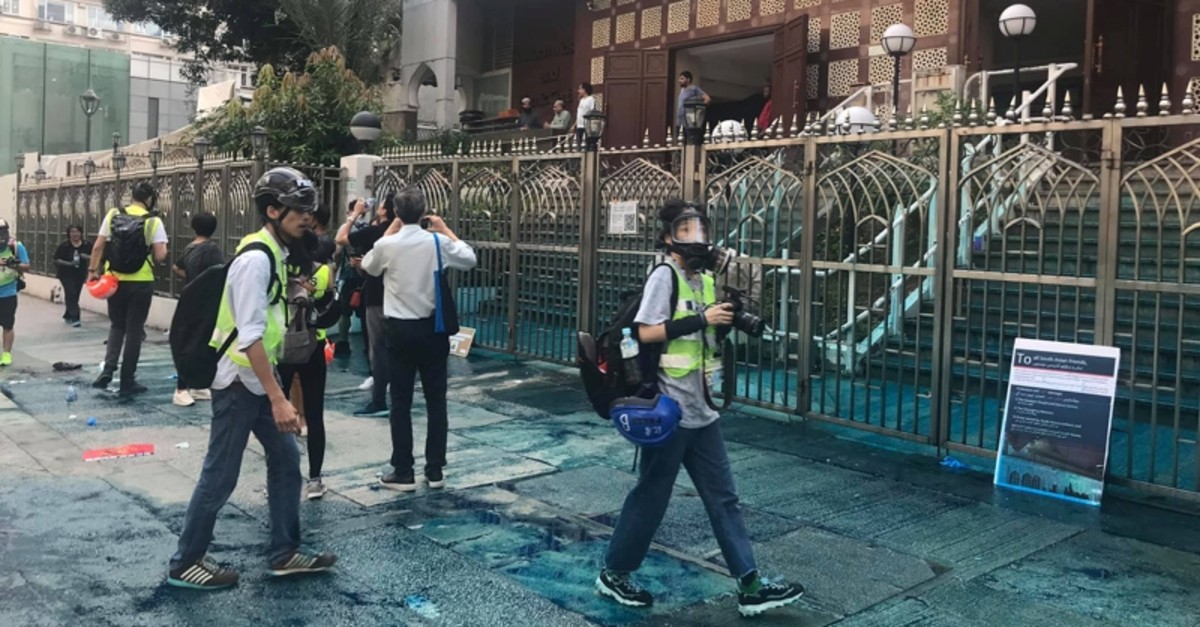 Members of the press are seen outside the Kowloon Masjid and Islamic Centre in Hong Kong, China, after police doused it with a water cannon, on October 20, 2019 in this picture obtained from social media. (Jeremy Tam/Civic Party via Reuters Photo)
by Associated Press Oct 21, 2019 10:05 am

Hong Kong officials apologized to Muslim leaders Monday after riot police sprayed a mosque gate and some people nearby with a water cannon while trying to contain pro-democracy demonstrations in the semiautonomous Chinese city.

The city's leader, Chief Executive Carrie Lam, and its police chief visited the Kowloon Mosque to say sorry to the chief imam and Muslim community leaders.

They left without commenting but the mosque leaders told reporters that the officials apologized.

"Our mosque is not damaged, nothing is done wrong. Only thing is that they should have not done it. For that they apologized so we accept it," said Saeed Uddin, honorary secretary of the Islamic Community Fund of Hong Kong.

During Sunday's protest, a police water cannon truck that was passing by the mosque suddenly sprayed a stinging blue-dyed liquid at a handful of people standing in front of its gate, according to video of the incident by pro-democracy lawmaker Jeremy Tam.

Tam said on his Facebook page that he and two others, neither of whom were protesters, went to hospital to check for injuries.

Local broadcaster RTHK reported that people outside the mosque were there to guard it.

Hong Kong authorities scrambled to minimize the fallout from the incident, which protesters seized on as the latest example of what they call unnecessarily harsh police tactics.

Police used the water cannon along with tear gas and pepper spray to battle protesters who remained on the streets after the end of an unauthorized rally calling for broader political rights and police accountability, in the latest turmoil to grip the financial center since early June.

Hong Kong is home to more than 300,000 Muslims, according to the Islamic Community Fund, which runs the city's five mosques and two Muslim cemeteries.

Police said Sunday the spraying was an accident and sent representatives to meet with mosque leaders.

"It is most unfortunate that the dispersal operation has caused unintended impact on the Kowloon Mosque," the force said on its Facebook page.