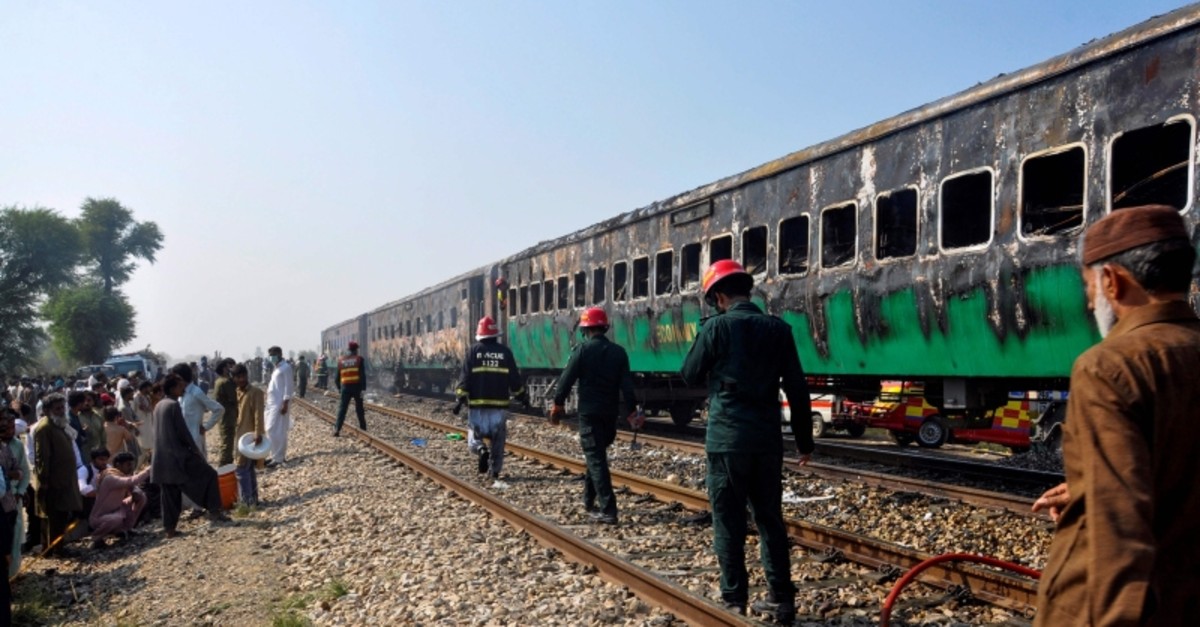 A fire swept through a Pakistani train on Thursday killing at least 71 people after a gas canister passengers were using to cook breakfast exploded.

Flames roared through the train cars as the train approached the town of Liaquatpur in Punjab, officials said, the latest tragedy to hit Pakistan's dilapidated, poorly maintained and mismanaged rail system.

"Two cooking stoves blew up. They were cooking, they had (cooking) oil which added fuel to fire," Minister for Railways Sheikh Rashid Ahmed told Geo television earlier. "Most deaths occurred from people jumping off the train," he added. The train eventually screeched to a halt.

Poor passengers often bring their own small gas stoves on the trains to cook their meals, despite rules to the contrary, according to Ahmed. Safety regulations are often ignored in the overcrowded trains.

Through the morning hours, rescue workers and inspectors sifted through the charred wreckage, looking for survivors and aiding the injured. Local Pakistani TV footage from the scene showed a huge blaze raging as firefighters struggled to get it under control.

Authorities said they were still trying to identify the victims and that the lists of fatalities and those injured were not ready yet. Another train has been dispatched to bring the survivors to the city of Rawalpindi, they said.
Turkey’s Foreign Ministry issued a statement expressing “deep sorrow” over the accident and loss of lives.
“We wish Allah’s mercy upon those who have lost their lives in this tragic accident, speedy recovery to those who were injured, and convey our condolences to the friendly Government and the brotherly people of Pakistan,” the statement said.

Pakistan's colonial-era railway network has fallen into disrepair in recent decades due to chronic underinvestment and poor maintenance.

Eleven people were killed in an accident in July and four in another accident in September.

About 130 people were killed in 2005 when a train rammed into another at a station in Sindh province, and a third train hit the wreckage.