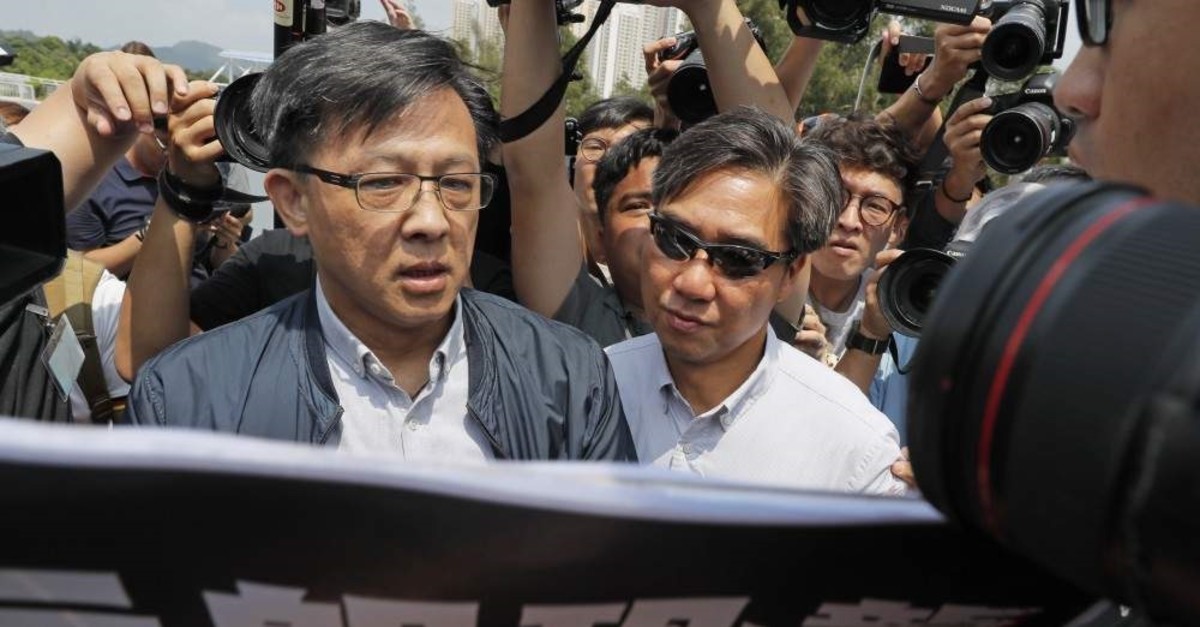 In this Aug. 12, 2019, photo, pro-Beijing lawmaker Junius Ho, left, attends a demonstration of an anti-riot vehicle equipped with water cannon at the Police Tactical Unit Headquarters in Hong Kong. (AP Photo)
by Associated Press Nov 06, 2019 9:11 am
An anti-government protester stabbed and wounded a pro-Beijing Hong Kong lawmaker who was campaigning for local elections Wednesday, police said, marking another escalation in five months of protests demanding political reforms in the semi-autonomous Chinese territory.
The government condemned the attack against Junius Ho and said police arrested the assailant. A police official, who requested anonymity as he isn't authorized to make statements, says Ho, his assistant and the attacker were hospitalized.
Ho told reporters after an initial treatment that the stab left a minor 2-centimer (0.79-inch) deep wound and was blocked by his rib cage.
A video circulating on social media showed a young man giving flowers to Ho before asking permission to snap a picture with him. Instead, he drew a knife from his bag and stabbed Ho's chest but was quickly overpowered by Ho and several others.
The man kept hurling abuses at Ho, calling him "human scum."
Ho has become a hate figure in the protest movement over his alleged links with armed masked men in white T-shirts who had violently attacked demonstrators and passengers at a subway station in northern Yuen Long on July 21.
At least 45 people were injured in the attack that marked a dark turn in the unrest and raised accusations that police, who were slow to arrive, colluded with the attackers. Police later said members of triad gangs, a branch of organized crime, were involved in the attack. Ho was seen shaking hands with some of the attackers that night.
Ho, whose constituency includes Yuen Long, denied colluding with triads. He claimed he bumped into the men after dinner and had thanked them for "defending their homes" but claimed he didn't know about the violence until later.
Protesters have thrashed Ho's office several times and desecrated his parents' graves.
The protests began in early June against a now-abandoned extradition bill that would have allowed suspects to be sent for trials in mainland China, which many saw as infringing of Hong Kong's judicial freedoms and other rights that were guaranteed when the former British colony returned to China in 1997. The movement has since grown into calls for greater democracy and police accountability.
More than 3,300 people have been arrested. In another bloody incident Sunday night, a knife-wielding man believed to be a Beijing supporter slashed two people after an argument and bit off part of a local politician's ear outside a mall. Police have arrested the assailant and two men who attacked him.
Last Update: Dec 20, 2019 1:28 am
RELATED TOPICS