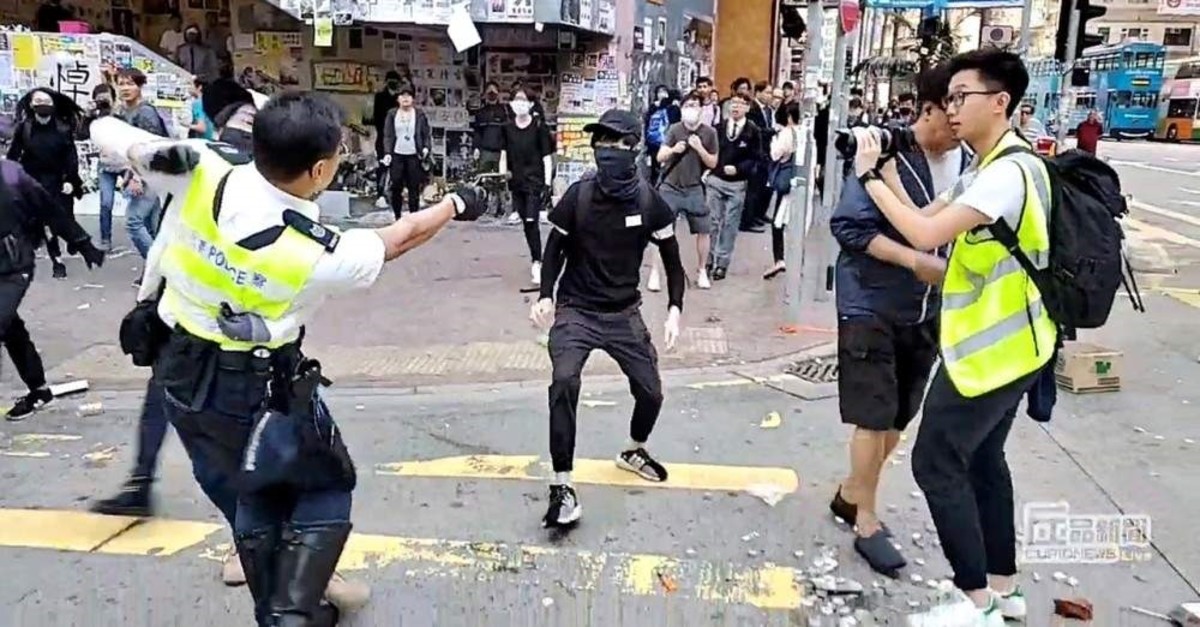 A still image from a social media video shows a police officer aiming his gun at a protester in Sai Wan Ho, Hong Kong, Nov. 11, 2019. (Cupid Producer via Reuters)
by Associated Press
Nov 11, 2019 10:12 am
A Hong Kong protester was shot by police Monday in a dramatic scene caught on video as demonstrators blocked train lines and roads during the morning commute.
The shooting is likely to inflame anger further in this semi-autonomous Chinese territory after a student who fell during an earlier protest succumbed to his injuries Friday and police arrested six pro-democracy lawmakers over the weekend.
The video shows a police officer shooing away a group of protesters at the intersection, then drawing his gun on a masked protester in a white hooded sweatshirt who approaches him. As the two struggle, another protester in black approaches, and the officer points his gun at the second one. He then fires at the stomach area of the second protester, who falls to the ground. The officer appeared to fire again as a third protester in black joined the tussle. The protester in white manages to flee, bounding up a nearby stairway, and the officer and a colleague pin the two in black to the ground.
Police said that only one protester was hit and he was undergoing surgery. A spokeswoman for the Hong Kong hospital authority said the person shot was in critical condition but gave no further details. Hong Kong is in the sixth month of protests that began over a proposed extradition law and have expanded to include demands for greater democracy and police accountability.
Activists say Hong Kong's autonomy and Western-style civil liberties, promised when the former British colony was returned to China in 1997, are eroding.
The video of Monday's shooting was posted on Facebook by Cupid Producer, an outlet that started last year and appears to post mostly live videos related to local news. The shooting occurred in a crosswalk at a large intersection strewn with debris that had backed-up traffic in Sai Wan Ho, a neighborhood on the eastern part of Hong Kong Island. Protesters blocked intersections around the city and disrupted subway and commuter rail service.
The rail operator, MTR, suspended service on several lines, and public broadcaster RTHK reported that a fire had been set inside a train at Kwai Fong station. In a news release, the Hong Kong government said police had been responding to vandalism and disruptions to traffic, including protesters throwing heavy objects onto roads from above.
"During police operations, one police officer has discharged his service revolver, one male was shot," the release said, adding that officers also drew their guns in the Shatin and Tung Chung neighborhoods.
The release denied what it called online rumors saying police had been ordered to "recklessly use their firearms," calling the allegation "totally false and malicious."
"All police officers are required to justify their enforcement actions," the statement said.
A patch of what looked like dried blood could be seen in a cordoned-off area after the shooting, as onlookers shouted insults at the police. Masked protesters continued to try to block other intersections in the area. Police chased them away with pepper spray, hitting some bystanders as well. On Sunday, police fired tear gas and protesters vandalized stores at shopping malls in anti-government demonstrations across Hong Kong. They targeted businesses whose owners are seen as pro-Beijing and also damaged the Sha Tin train station. Police said they arrested at least 88 people on various charges, including unlawful assembly, possession of an offensive weapon, criminal damage and wearing masks at an unlawful assembly.
In a sign of growing frustration on behalf of Hong Kong Chief Executive Carrie Lam and her backers in Beijing, the administration on Saturday announced the arrest of six lawmakers on charges of obstructing the local assembly during a raucous May 11 meeting over the extradition bill. All were freed on bail. The city has also been rocked by the death Friday death of a university student, Chow Tsz-Lok, who fell from a parking garage when police fired tear gas at protesters. The territory is preparing for Nov. 24 district council elections that are viewed as a measure of public sentiment toward the government. Pro-democracy lawmakers accuse the government of trying to provoke violence to justify canceling or postponing the elections.
Last Update: Dec 20, 2019 1:35 am