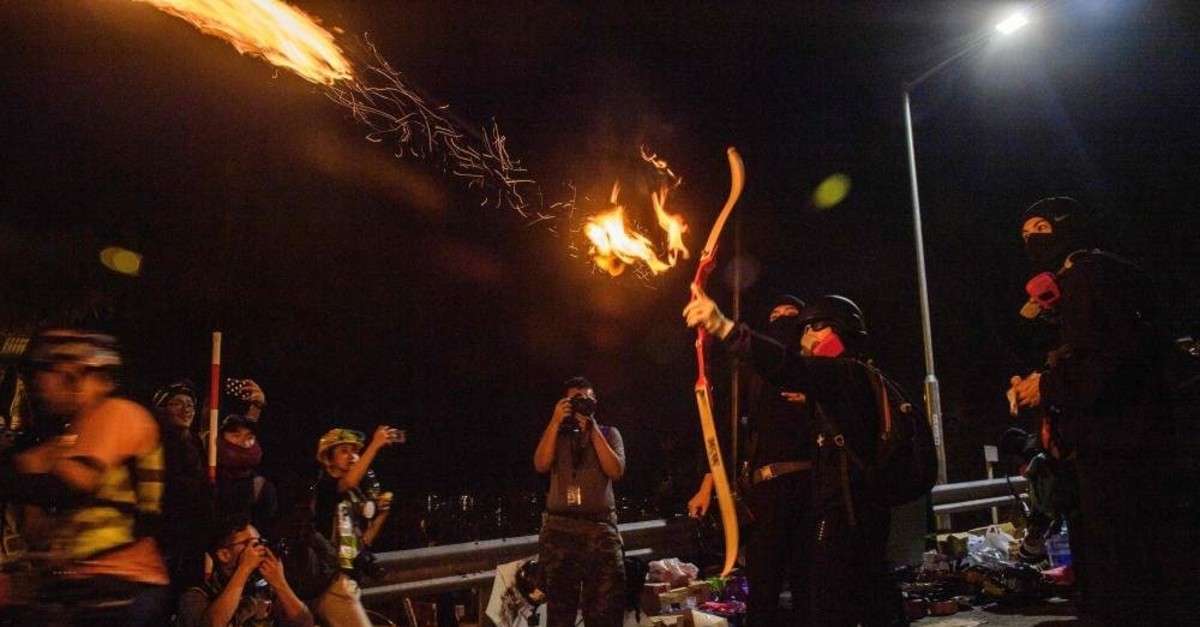 A protester releases a fire arrow with his bow during a clash with police at the Chinese University in Hong Kong, Tuesday, Nov. 12, 2019. (AFP Photo)
by Compiled from Wire Services Nov 13, 2019 10:02 am
Pro-democracy protesters stepped up Wednesday a "blossom everywhere" campaign of roadblocks and vandalism across Hong Kong that has crippled the international financial hub this week and ignited some of the worst violence in five months of unrest.
Police increased security around Hong Kong and its university campuses Wednesday as they braced for more violence after sharp clashes overnight with anti-government protesters.
Many subway and rail stations were closed after the protesters blocked commutes and vandalized trains. Classes were suspended at universities, and parents of school students advised they could keep their children home.
Police and protesters battled on multiple fronts overnight at the Chinese University of Hong Kong. Gasoline bombs and fires lit the nighttime scene, and the situation remained tense in the morning and early afternoon.
The new phase in the crisis prompted police to warn on Tuesday the city was "on the brink of total collapse."
China, facing the biggest challenge to its rule of the territory since it was handed back by the United Kingdom in 1997, has insisted it will not buckle to the pressure and warned of tougher security measures.
Groups of riot police were deployed around central Hong Kong and its outlying territories to try and contain new violence, even as students at the Chinese University — located in the outskirts of the sprawling metropolis — prepared for new clashes with police. Many were armed with gasoline bombs while some carried bows and arrows.
The university's student union president, Jacky So, appealed for an injunction with the High Court to ban police from entering the campus without a warrant, or the school's approval. Police had entered the campus and fired tear gas and used a water cannon late Tuesday.
The injunction would also block police from using crowd control weapons, such as tear gas and rubber bullets at the university. A decision is expected late Wednesday.
The chaos was part of the largely anonymous protest movement's new strategy of "blossom everywhere," in which small groups of people target as many parts of the city as possible to cause maximum disruption and stretch police resources.
Protesters had until this week largely confined their actions to evenings and the weekends.
The campaign began with an effort to shut down the train network and enforce a citywide strike Monday.
The already tense atmosphere escalated Monday when a police officer shot an unarmed 21-year-old protester, leaving him in a critical condition.
It was only the third confirmed time a police officer had shot someone with live bullets since the unrest began in June.
The protests began over a proposed law that would have allowed criminal suspects to be extradited to mainland China, where they could face opaque and politically sensitive trials.
Activists saw the bill as another sign of an erosion in Hong Kong's autonomy and civic freedoms, which China promised would be maintained for 50 years under a "one nation, two systems" principle when the former British colony returned to Chinese control in 1997. Protesters are demanding the right to freely elect their leaders.
Hong Kong leader Carrie Lam eventually withdrew the bill but has insisted the violence stop before any further political dialogue can take place.
Last Update: Dec 20, 2019 1:39 am
RELATED TOPICS