International court approves investigation into crimes against Rohingya in Myanmar 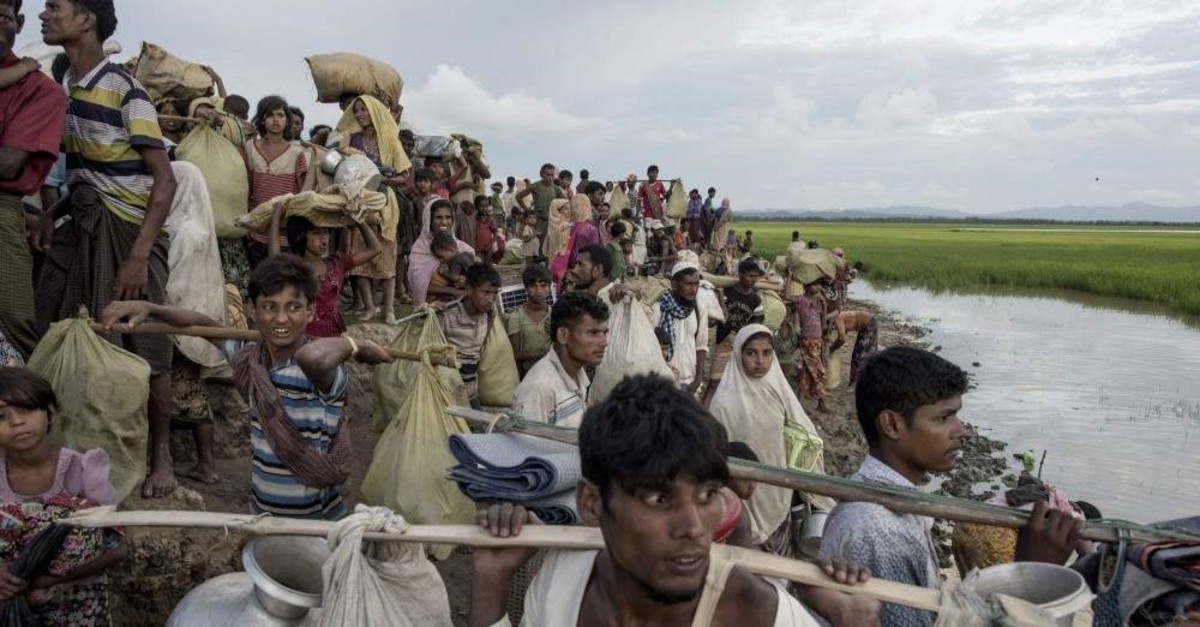 Rohingya refugees walk with their belongings after crossing the Naf river from Myanmar into Bangladesh, Whaikhyang, Oct. 9, 2017. (AFP Photo)
by Associated Press Nov 15, 2019 12:42 am

International Criminal Court judges on Thursday approved a request from prosecutors to open an investigation into crimes committed against Myanmar’s Rohingya Muslim minority.

A prominent rights group said the decision will give fresh hope to victims that those responsible for brutal crimes against the Rohingya will be brought to justice.

However, the court has no police force of its own and must rely on the cooperation of states to execute arrest warrants.

There was no immediate public reaction from Myanmar’s government, though in previous statements it has rejected the court’s jurisdiction and said it would not cooperate with any proceeding.

The allegations stem from a counterinsurgency campaign that Myanmar's military began in August 2017 in response to an insurgent attack. More than 700,000 Rohingya fled to neighboring Bangladesh to escape what has been called an ethnic cleansing campaign involving mass rapes, killings and the torching of homes.

Myanmar is not a member of the global court, but Bangladesh is, and the court said that it has jurisdiction over crimes partially committed there.

The court said in a statement that a panel of judges who studied Prosecutor Fatou Bensouda's request to open an investigation concluded that there are grounds to believe widespread acts of violence were committed "that could qualify as the crimes against humanity of deportation across the Myanmar-Bangladesh border and persecution on grounds of ethnicity and/or religion against the Rohingya population."

Bensouda welcomed the decision as "a significant development, sending a positive signal to the victims of atrocity crimes in Myanmar and elsewhere.”

Myanmar’s government and military have consistently denied violating human rights and said its operations were justified in response to attacks by Rohingya insurgents.

The judges said the investigation can cover "any crime, including any future crime” committed at least partly in Bangladesh or another court member state and linked to the Rohingya.

The decision came just days after the Gambia, on behalf of the Organization of Islamic Cooperation, filed a case at the International Court of Justice accusing Myanmar of genocide in its treatment of the Rohingya.

Bensouda had asked judges in July for permission to investigate.

The court said judges considering the request received the views from or on behalf of hundreds of thousands of alleged victims. The judges unanimously backed an investigation.

Muslim Rohingya face heavy discrimination in Buddhist-dominated Myanmar, where they are regarded as having illegally immigrated from Bangladesh, even though many families have lived in Myanmar for generations. Most are denied citizenship and basic civil rights.

In September, a two-year United Nations fact-finding mission reported that Myanmar’s counterinsurgency campaign in 2017 included "genocidal acts,” killed thousands and force some 740,000 people to flee across the border.

According to the mission, it has a confidential list of more than 100 people suspected of involvement in genocide, crimes against humanity and war crimes, in addition to six generals whom it already named a year ago.

The mission’s findings will likely form a key part of the evidence when International Criminal Court prosecutors begin their formal investigation.

"As a prosecuting office, we hope that through our work, we can bring justice to the victims,” Bensouda, the prosecutor, said.