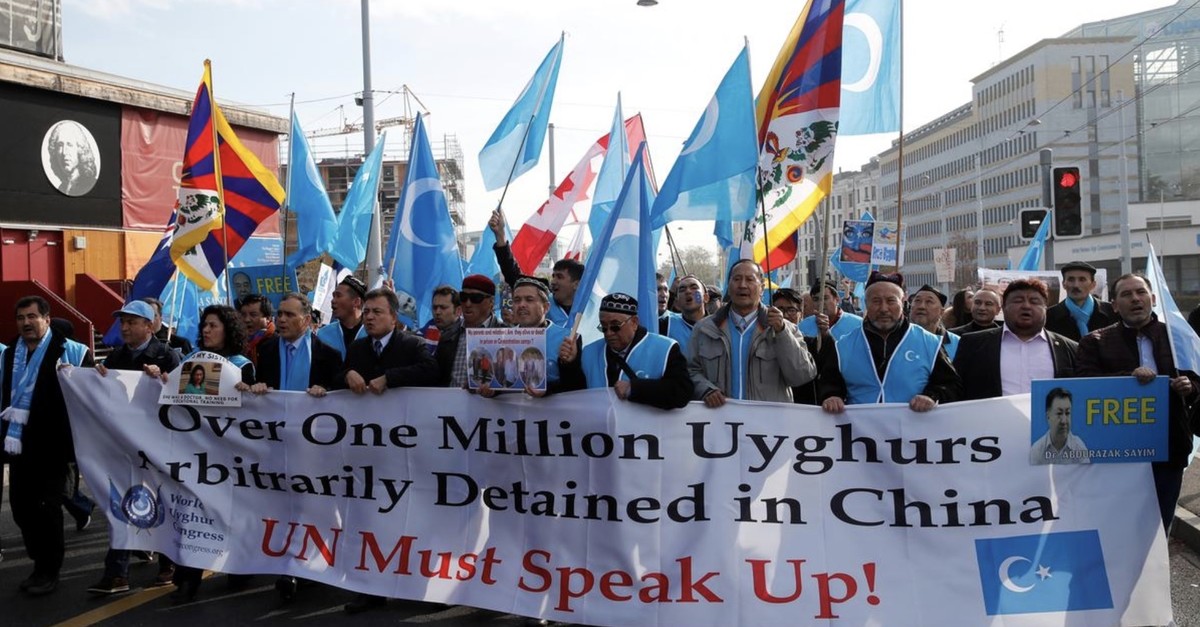 People demonstrate against China during its Universal Periodic Review by the Human Rights Council in front of the United Nations Office in Geneva, Switzerland, November 6, 2018. (Reuters Photo)
by Nov 19, 2019 8:25 pm

A rare and huge leak of Chinese government documents has shed new light on a security crackdown on Muslims in China's Xinjiang region, where President Xi Jinping ordered officials to act with "absolutely no mercy" against "separatism and extremism," The New York Times reported.

Human rights groups and outside experts say more than 1 million Uighurs and other mostly Muslim minorities have been rounded up in a network of internment camps across the far-western region.

The 403 pages of internal papers obtained by the Times provide an unprecedented look into the highly-secretive Communist Party's controversial crackdown, which has come under increasing international criticism, especially from the United States.

The documents include previously unpublished speeches by Xi as well as directives and reports on the surveillance and control of the Uighur population, the newspaper said on the weekend.

The leak also suggests that there has been some discontent within the party about the crackdown.

The documents were leaked by an unnamed member of the Chinese political establishment who expressed hope that the disclosure would prevent the leadership, including Xi, from "escaping culpability for the mass detentions," the Times said.

In a 2014 speech to officials made after militants from the Uighur minority killed 31 people in a train station in southwestern China, Xi called for an all-out "struggle against terrorism, infiltration and separatism" using the "organs of dictatorship," and showing "absolutely no mercy," according to the daily.

The internment camps expanded rapidly following the appointment in 2016 of a new party chief in Xinjiang, Chen Quanguo.

Chen, according to the Times, distributed Xi's speeches to justify the crackdown and urged officials to "round up everyone who should be rounded up."

The trove of leaked documents included a guide to answering questions from students who had returned home to Xinjiang to find their families missing or detained in camps.

Officials were instructed to say the students' family members had been infected with the "virus" of extremist thinking and needed to be treated before "a small illness becomes a serious one."

China's Foreign Ministry and the Xinjiang regional government did not immediately respond to Agence France-Presse's (AFP) requests for comment.

The documents also shed light on the party's punishment of one official, Wang Yongzhi, who was investigated from 2017 to 2018 for disobeying party orders.

Wang released on his own initiative more than 7,000 people from camps in Xinjiang, and feared that "rounding up so many people would knowingly fan conflict and deepen resentment," according to a confession by Wang leaked to the Times.

China, after initially denying the camps, has described them as "vocational schools aimed at dampening the allure of extremism and violence through education and job training."

But rights groups and foreign media, including AFP, have reported that official documents and satellite images show the facilities are equipped and run like prisons.