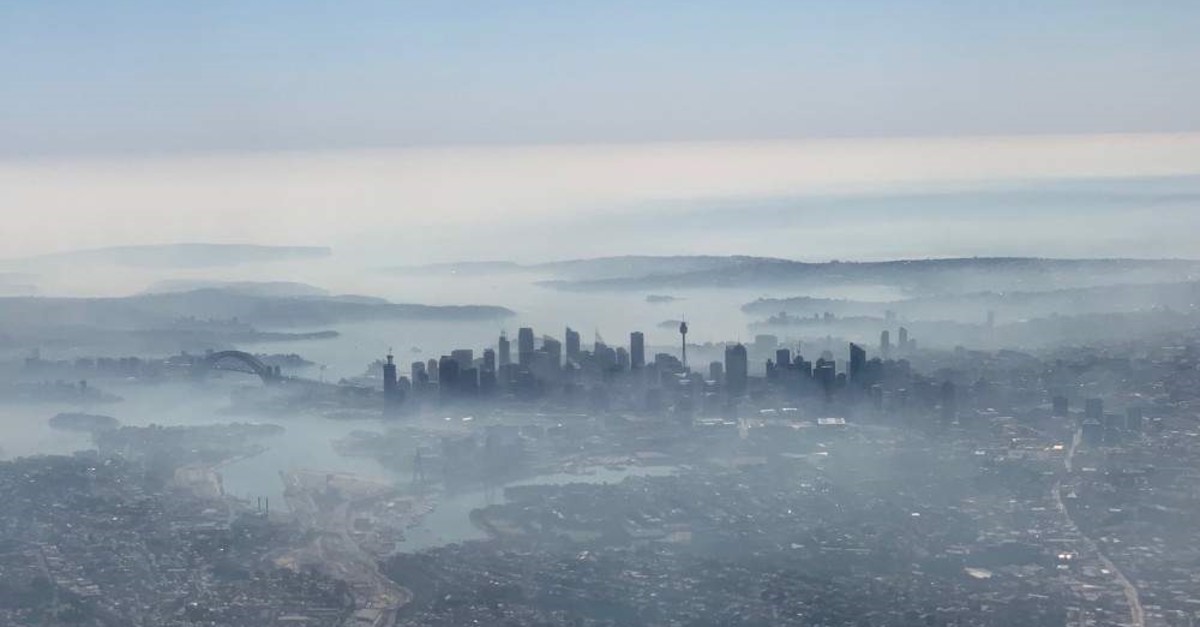 Smoke haze covers Sydney, Tuesday, Nov. 19, 2019, as wildfires burn near the city. (AAP Image via Reuters)
by Compiled from Wire Services Nov 19, 2019 10:39 am
Thick smoke from wildfires has shrouded Sydney and its surrounding areas with health experts warning residents with medical conditions to remain indoors.
The Sydney skyline was barely visible with air quality in some parts of the city reaching over hazardous levels early Tuesday.
Shane Fitzsimmons, the state’s rural fire commissioner, says firefighters would be challenged by high temperatures and wind conditions.
Most of the coastal areas of the New South Wales are under very high fire danger with 48 fires burning across the state. Fires have destroyed 577 homes in New South Wales during the wildfire season, which peaks during the Southern Hemisphere summer but has started early after an unusually warm and dry winter.
Wildfires have so far this month claimed at least four lives, burnt about 2.5 million acres (1 million hectares) of farmland and bush and destroyed more than 300 homes.
Powerful winds fanned around 130 fires that have been burning across New South Wales and Queensland states for several days, and pushed smoke south to form a thick haze over Sydney, home to around 5 million people.
Firefighters were scrambling to strengthen fire containment lines ahead of forecast higher temperatures for much of the rest of the week.
"More than 1,300 firefighters are working on these fires, undertaking backburning operations and strengthening containment lines ahead of forecast hot, dry and windy weather, with seven areas under a total fire ban," the New South Wales Rural Fire Service said in a statement.
The current bushfire crisis has mostly been contained to the east coast of New South Wales and Queensland states, but officials in South Australia warned on Tuesday that forecast near-record temperatures raises the risks in that state.
Australia's Bureau of Meteorology said temperatures in Adelaide, the capital of South Australia, will hit 42 degrees Celsius (107.6 degrees Fahrenheit) on Wednesday, which coupled with strong winds will create "catastrophic" fire danger conditions.
Last Update: Dec 20, 2019 1:46 am
RELATED TOPICS