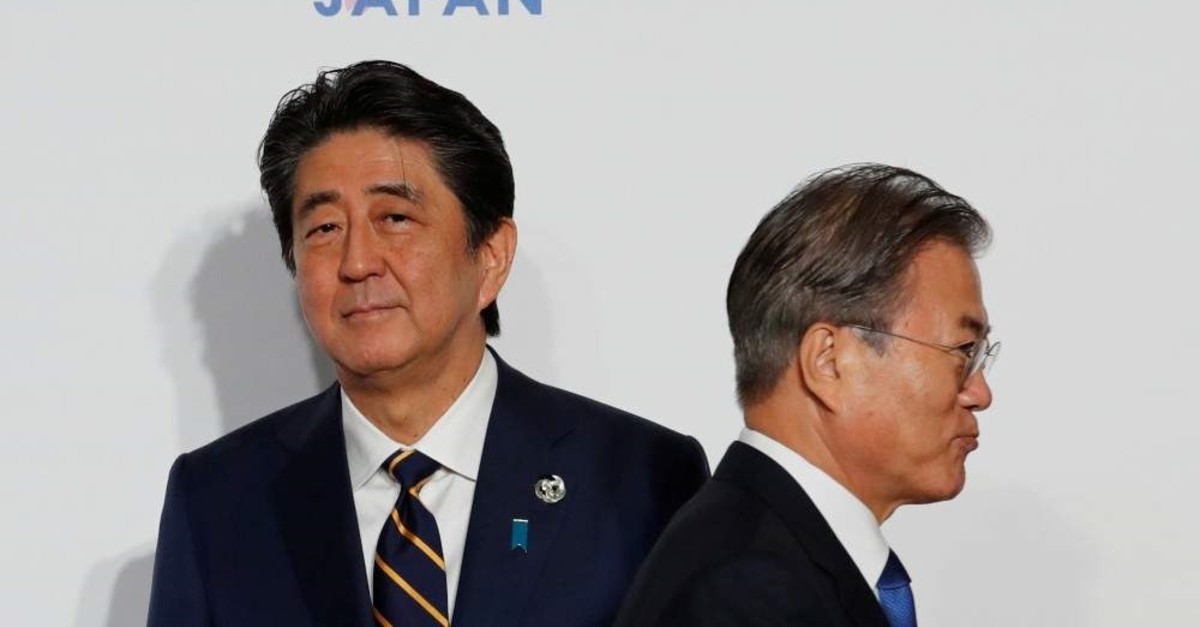 South Korean President Moon Jae-In is welcomed by Japanese PM Shinzo Abe upon his arrival for a welcome and family photo session at the G20 leaders summit in Osaka, Japan, June 28, 2019. (Reuters Photo)
by Daily Sabah with DPA Dec 03, 2019 12:01 pm

Japanese Prime Minister Shinzo Abe said Tuesday he would be willing to meet face-to-face with South Korean President Moon Jae-In during his visit to China for a trilateral summit in late December in an effort to ease months of tensions over compensation for South Koreans forced to work at Japanese companies during the imperial era.

The meeting would be the first since South Korea decided in late November to maintain a military intelligence-sharing pact with Japan, which Seoul had previously said it would scrap amid worsening relations over trade and wartime history.
Moon and Abe have not had formal talks for more than a year, though they had an 11-minute chat at an international conference in Thailand early November.

The two countries' relations have been badly frayed since South Korea's Supreme Court in October ordered Japanese companies to compensate forced labor victims during Japan's colonial rule of the Korean Peninsula between 1910 and 1945.

South Korea said in August that it would terminate the military intelligence pact with Japan or GSOMIA despite lingering concerns about nuclear and missile programs in North Korea. Seoul's move came shortly after Tokyo decided to downgrade the neighboring country's trade status.

Abe also said he would hold a one-on-one meeting with Chinese Premier Li Keqiang during his stay in Chengdu from December 23 to 25.

The Japanese premier announced the plans during a meeting with government officials and ruling coalition lawmakers in Tokyo.

Abe also said he would travel to India from December 15 to 17 to hold talks with Indian Prime Minister Narendra Modi.

Abe is likely to seek enhanced cooperation with India to realize the idea of a "free and open" Indo-Pacific amid growing Chinese military assertiveness in the East and South China seas.