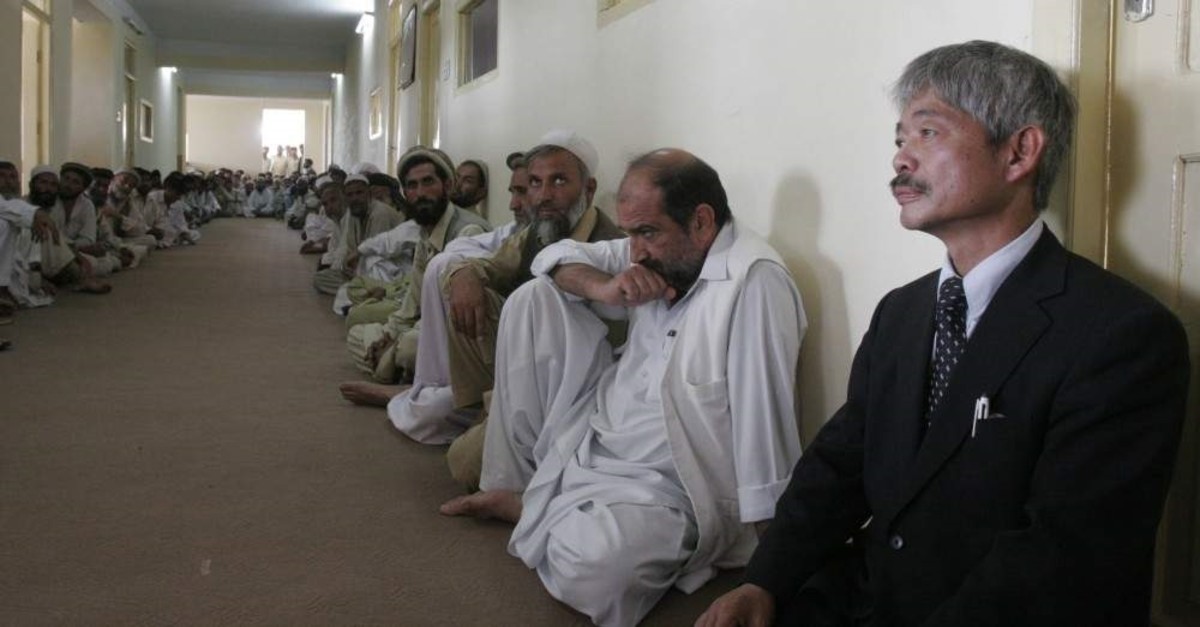 In this Aug. 28, 2008, file photo, Tetsu Nakamura, right, executive director of PMS Japan, participates in the memorial service for Japanese aid worker Kazuya Ito at the governor's house in Jalalabad, Nangarhar province, Afghanistan. (AP Photo)
by Compiled from Wire Services Dec 04, 2019 10:37 am
A Japanese doctor who spent decades working in Afghanistan was killed Wednesday along with five Afghans in an attack in the east of the country, officials said.
Dr. Tetsu Nakamura, 73, who headed Peace Japan Medical Services – known as Peshawar Kai in Japanese – was shot by gunmen while in a vehicle in Jalalabad in Nangarhar province.
"Sadly, Dr Nakamura has passed away from the wounds he received in the armed attack this morning," said Attaullah Khogyani, a spokesman for Nangarhar's governor.
The doctor, well-known in Japan, had been shot on the right side of his chest and was in the process of being transferred to a hospital in Bagram near Kabul when he died at Jalalabad airport, officials said.
The five Afghans killed were three of Nakamura's security guards, a driver and another colleague, Khogyani said.
The attack comes as humanitarian groups remain on high alert just days after an American aid worker for the U.N. was killed in a bombing in Kabul.
Mitsuji Fukumoto, an official with Nakamura's organization, told reporters in Tokyo that the motive for Wednesday's attack was unclear.
"We have no idea what was the reason behind the attack, whether it was a simple robbery or whether it was conflict of interest," Fukumoto told reporters.
Nakamura is well known in Japan for his aid work, which dates back decades.
Peshawar-kai was founded by associates of Nakamura, who had lived and worked in Afghanistan and Pakistan since 1984 when he went to treat leprosy patients among Afghan refugees.
In 2003 Nakamura, a native of the southwestern Japanese city of Fukuoka, won the Philippines' Ramon Magsaysay Award for peace and international understanding – often called Asia's Nobel Prize.
Fond of sporting Pashtun dress, Nakamura was an outspoken opponent of the 2001 U.S.-led war that ousted the Taliban regime, whom he defended as able administrators.
One of Nakamura's Japanese colleagues, Kazuya Ito, was abducted and killed in 2008 in Nangarhar.
Nangarhar police said they were searching for the attackers, who fled the scene, and that an investigation was underway.
Photos from the scene showed a white pickup truck with a large cabin. Its side windows appeared to have been shot out, and at least three bullet holes could be seen in the windshield.
The Taliban denied responsibility for the attack, saying they have "good relations" with organizations that "contribute to the reconstruction of Afghanistan."
Nangarhar was once a hotbed of activity for Daesh terror group's Afghanistan affiliate.
Authorities recently claimed the terrorists have been territorially defeated in the province – but small cells are thought to remain.
Aid agencies and non-governmental groups are sometimes targeted in Afghanistan's war.
In late November, an American working for the United Nations mission in Afghanistan was killed and five Afghans, including two staff members of the mission, were wounded when a grenade hit a U.N. vehicle in Kabul.
Also in the capital, the Taliban in May targeted Counterpart International, a U.S.-funded non-profit group working with marginalized people. Nine people were killed in that attack.
Last Update: Dec 20, 2019 2:07 am
RELATED TOPICS