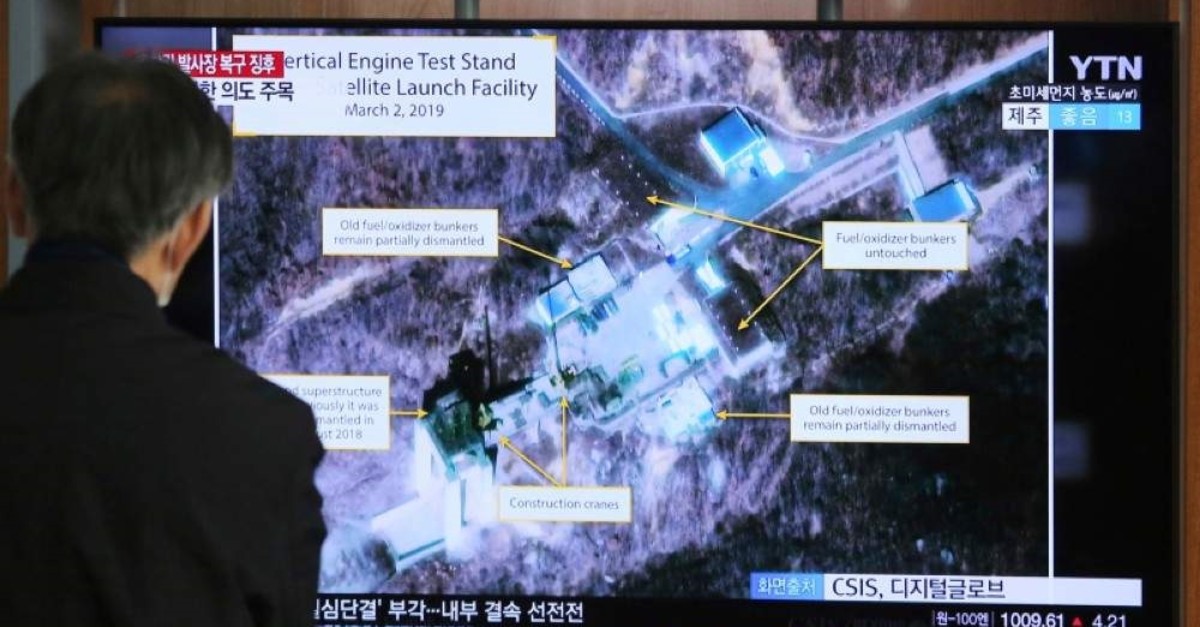 In this March 6, 2019 file photo, a man watches a TV screen showing an image of the Sohae Satellite Launching Station in Tongchang-ri, North Korea, during a news program at the Seoul Railway Station in Seoul, South Korea. (AP Photo)
by Compiled from Wire Services Dec 08, 2019 12:17 pm

North Korea said Sunday it carried out a "very important test” at its long-range rocket launch site that it reportedly rebuilt after having partially dismantled it after entering denuclearization talks with the United States last year.

"A very important test took place at the Sohae Satellite Launching Ground on the afternoon of Dec. 7, 2019,” said Korean Central News Agency (KCNA), quoting an official from the Academy of the National Defence Science.

The announcement comes amid dimming prospects for a resumption of negotiations, with North Korea warning it would seek "a new way” if it fails to get major U.S. concessions by year’s end. They have said its resumption of nuclear and long-range missile tests depends on the United States.

KCNA said that the test would have "an important effect on changing the strategic position of [North Korea]," but did not give further details.

South Korean news agency Yonhap reported that Pyongyang's most recent claim could mean the North had successfully tested a new rocket engine that could be used in the launch of a new long-range rocket or an intercontinental ballistic missile.

CNN reported Friday that a new satellite image indicated North Korea may be preparing to resume testing engines used to power satellite launchers and intercontinental ballistic missiles at the site. Seoul's Defense Minister said later Sunday in a brief statement that South Korea and the U.S. are closely monitoring activities at the Sohae site and other key North Korean areas.

The North Korean administration announced on Dec. 3 that it would send a "Christmas gift" to the U.S., with which talks for a nuclear deal underway.

The East Asian country said the content of the present would depend on the negotiations between the Washington and Pyongyang administrations.

The Sohae launching center in Tongchang-ri, a seaside region in western North Korea, is where the North has carried out banned satellite launches in recent years, resulting in worldwide condemnation and U.N. sanctions over claims that they were disguised tests of long-range missile technology.

After North Korea opened nuclear talks with the U.S. last year, Washington and Seoul said Pyongyang had dismantled a rocket engine testing facility at its Tongchang-ri site as part of disarmament steps that include closing the country’s underground nuclear testing site and suspending ICBM and nuclear tests. But South Korea's spy agency and some U.S. experts said in March that North Korea was restoring the facility, the assessments that rose doubts over whether it is committed to denuclearization.

U.S.-North Korea diplomacy largely remains deadlocked since the second summit between Trump and North Korean leader Kim Jong Un in Vietnam in February due to disputes over how much sanctions relief the North must get in return for dismantling its key nuclear complex – a limited disarmament step.

North Korea has since warned the U.S. must abandon hostile policies and come out with new acceptable proposals by the end of this year or it would take an unspecified new path. In recent months, North Korea has performed a slew of short-range missiles and other weapons launches and hinted at lifting its moratorium on nuclear and long-range missiles.

North Korea said the results of Saturday's test were submitted to the Central Committee of the ruling Workers’ Party. The North said last week that the Central Committee will hold a meeting in late December to discuss unspecified "crucial issues” in line with "the changed situation at home and abroad.”

At the United Nations, a statement released by North Korea’s U.N. ambassador, Kim Song, said Saturday that denuclearization had "already gone out of the negotiation table.” The statement accused the Trump administration of persistently pursuing a "hostile policy” toward the country "in its attempt to stifle it.”

The statement was a response to Wednesday’s condemnation by six European countries of North Korea’s 13 ballistic missile launches since May. The North Korean diplomat accused the Europeans – France, Germany, Britain, Belgium, Poland and Estonia – of playing "the role of pet dog of the United States in recent months.”

"We regard their behavior as nothing more than a despicable act of intentionally flattering the United States,” the ambassador said.