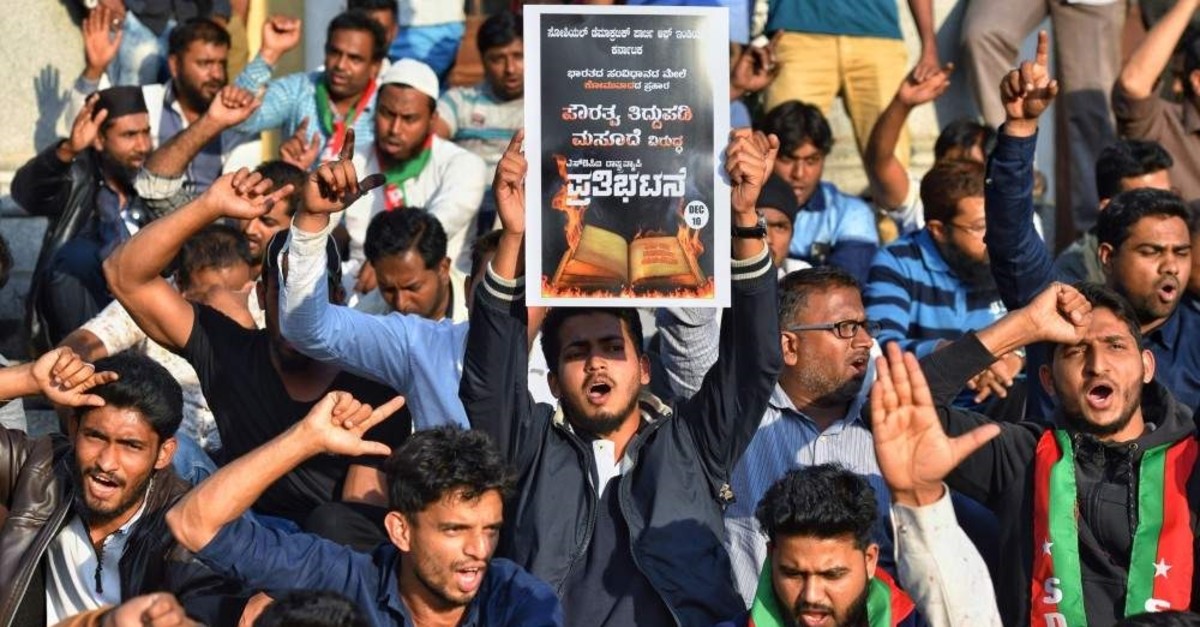 Members and activists of Social Democratic Party of India (SDPI) hold posters and shout slogans against the Citizenship Amendment Bill 2019 during a protest demonstration in Bangalore, Dec. 10, 2019. (AFP Photo)
by Dec 10, 2019 9:13 pm
Protestors in Assam state, in northeast India, clashed with police, set fire to tires and cut down trees to block roads on Tuesday in a shutdown across the region hours after lawmakers approved the government's controversial new citizenship bill.
The legislation, set to go before the upper house on Wednesday, will fast-track citizenship claims from immigrants from three neighboring countries — but not if they are Muslim.
For Islamic groups, the opposition, rights groups and others, this fits into Prime Minister Narendra Modi's Hindu nationalist agenda aimed at marginalizing India's 200 million Muslims — an agenda he denies. Residents in the northeast of the country, in particular, base their objections on the feat that large numbers of Hindu migrants from Bangladesh, who claims Hindus are intruders, will swamp their homeland.
On Tuesday, the region — sandwiched between Bangladesh, China and Myanmar — was crippled by a general strike called by dozens of organizations, with buses off the roads and most schools and shops shut. Protesters in Guwahati, Assam state's biggest city, clashed with police in some areas, with officers charging the crowd with heavy wooden sticks known as lathis. There were no reports of serious injuries. Others demonstrated in front of the homes of members of Modi's Bharatiya Janata Party (BJP).
"The bandh (strike) has drawn a huge response in northeastern states," said Samujjal Bhattacharyya from the powerful umbrella group the North East Students' Organization. "We have made it clear ... that the CAB (Citizenship Amendment Bill) will not be accepted and we are going to intensify our agitation," he told AFP, adding: "Assam and the northeastern states have already taken on a huge burden in terms of illegal foreigners," he said.
Authorities in Tripura state said they were suspending mobile internet services from Tuesday evening to stop the spread of disinformation on social media. In Assam's Kamrup district, authorities imposed an order restricting gatherings of two or more people amid fears the violence could escalate. A farmers' activist group, Krishak Mukti Sangram Samiti, called for locals across the northeast to take to the streets again from Wednesday morning.
Compared to Nazis
India's lower house passed the bill just after midnight following a fiery debate that saw one Muslim MP compare the government to the Nazis. Once law, it will make it much easier for Hindus, Sikhs, Buddhists, Jains, Parsis, and Christians fleeing Afghanistan, Bangladesh and Pakistan to become Indians.
Modi's government says Muslims from these three countries have been excluded because they can choose to go to other Muslim countries. Also excluded are other minorities fleeing political or religious persecution elsewhere, such as Tamils from Sri Lanka, Rohingya from Myanmar and Tibetans from China.
"This bill is in line with India's centuries-old ethos of assimilation and belief in humanitarian values," Modi tweeted. "I say again and again that this bill has nothing to do with the Muslims in this country," Home Minister Amit Shah told parliament.
Shah has stoked further fears among India's Muslims with his aim is to implement a National Register of Citizens (NRC) that he says will see all "infiltrators" identified and "expelled" as of 2024.
On Monday, almost 1,200 scientists and scholars at institutions across India and abroad published a joint letter expressing their "dismay" at the legislation, saying the constitution called for members of all faiths to be treated equally.
The move also evoked sharp reactions from international groups, with an influential U.S. body calling for sanctions on Shah and other key players of the proposed law.
The U.S. Commission on International Religious Freedom in a statement Monday termed the bill as a "dangerous turn in the wrong direction", that together with the proposed National Register of Citizens, aims to create a religious test for Indian citizenship that would strip citizenship from millions of Muslims.
India's foreign ministry retorted Tuesday saying the U.S. group's remarks were "neither accurate nor warranted" and "guided by their prejudices and biases".
The European Union's ambassador to India, Ugo Astuto, expressed concern, saying he hoped: "the principle of equality enshrined in the Indian Constitution will be upheld".
Pakistani Prime Minister Imran Khan tweeted that the legislation by India's "fascist" government "violates" all norms of international human rights law and bilateral agreements.
Last Update: Dec 20, 2019 2:18 am
RELATED TOPICS