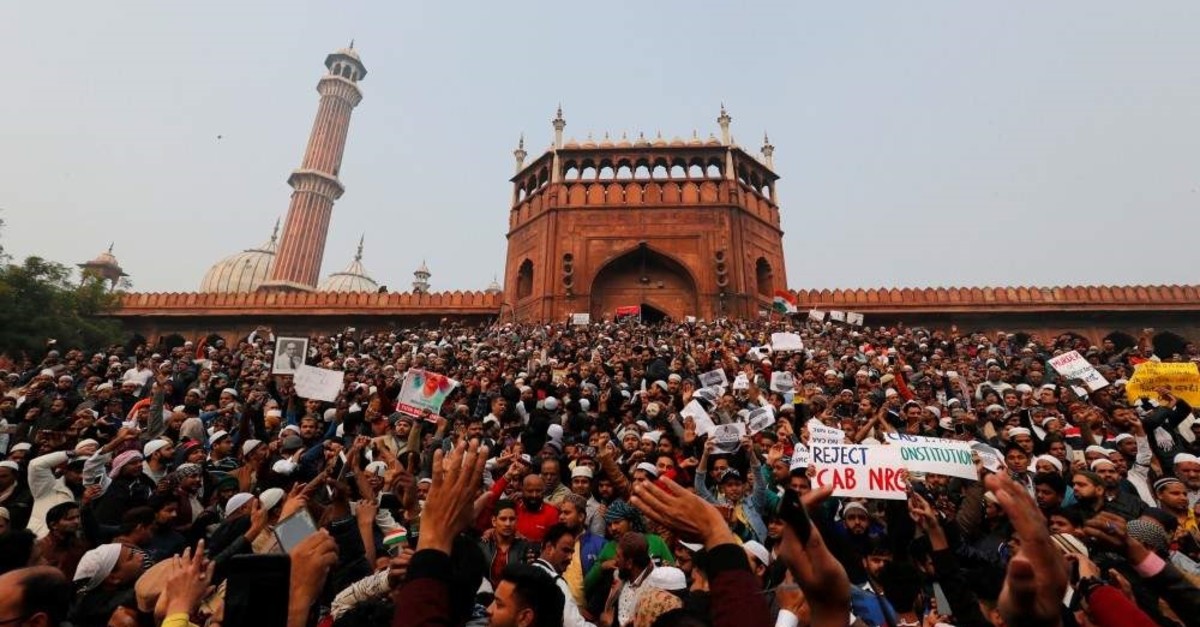 Demonstrators attend a protest against a new citizenship law, after Friday prayers at Jama Masjid in the old quarters of Delhi, Dec. 20, 2019. (REUTERS Photo)
by Daily Sabah with Agencies Dec 20, 2019 5:21 pm

At least nine were killed and thousands were detained amid demonstrations against the anti-Muslim citizenship law, as Indian police ban public gatherings while cutting internet services to stop protests

After more than a week of deadly unrest triggered by a citizenship law seen as anti-Muslim, violence has escalated in India with a total of nine deaths reported Friday. Police banned public gatherings in parts of the Indian capital and other cities for a third day and cut internet services to try to stop growing protests. The law making it easier for persecuted minorities from three neighboring countries to get citizenship – but not if they are Muslim – has stoked fears that Modi wants to remold India as a Hindu nation.

Thousands of protesters stood inside and on the steps of New Delhi's Jama Masijd, one of India's largest mosques, after Friday afternoon prayers, waving Indian flags and shouting slogans against the government and the citizenship law. The protesters, joined by the leader of a prominent group in the Dalit community, the lowest group in the Hindu caste system, pushed their way out of the mosque onto the main road and tore down posters of Prime Minister Narendra Modi before sitting down on the road at Delhi Gate in the Old Delhi district. About 2,000 people protested outside New Delhi's Jamia Millia Islamia University, which was the site of weekend clashes in which students accused police of using excessive force that sent dozens to hospitals.

Police in the southern coastal city of Mangaluru imposed a three-day curfew on Friday after the latest two fatalities. In Uttar Pradesh, India's most populous state, authorities said they shut down the internet in large parts of the state to prevent inflammatory material from being circulated. News channel NDTV broadcast images from the state of a torched police van, and officers chasing protesters throwing stones and wielding sticks. Police temporarily held 1,200 protesters in New Delhi alone on Thursday and hundreds of others were detained in other cities after they defied bans on assembly. As the student-led protest movement against the anti-Muslim citizenship law has spread nationwide, the U.N. voiced concern over the violence and alleged use of excessive force by Indian security forces.

The backlash against the law pushed through parliament by India's Hindu nationalist government on Dec. 11 marks the strongest show of dissent since Modi was first elected in 2014. India, with a population of over 1.3 billion, is 80% Hindu and 14% Muslim, which means it has one of the largest Muslim populations of any country in the world. There have been growing questions about the stance of the government, led by Modi's Hindu-nationalist party, toward India's 172 million Muslims. The law grants citizenship to non-Muslims from three neighboring countries in what opponents say is part of Modi's Hindu nationalist master plan. Modi has said Muslims from Pakistan, Bangladesh and Afghanistan are not covered by the citizenship law because they have no need of India's protection.

The citizenship law follows the revocation of the special status of the Muslim-majority Kashmir region, and a court ruling clearing the way for the construction of a Hindu temple on the site of a mosque razed by Hindu zealots. It also follows a contentious citizenship registry process in northeastern India's Assam state intended to weed out people who immigrated to the country illegally. Nearly 2 million people in Assam were excluded from the list, about half Hindu and half Muslim, and have been asked to prove their citizenship or else be considered foreign.