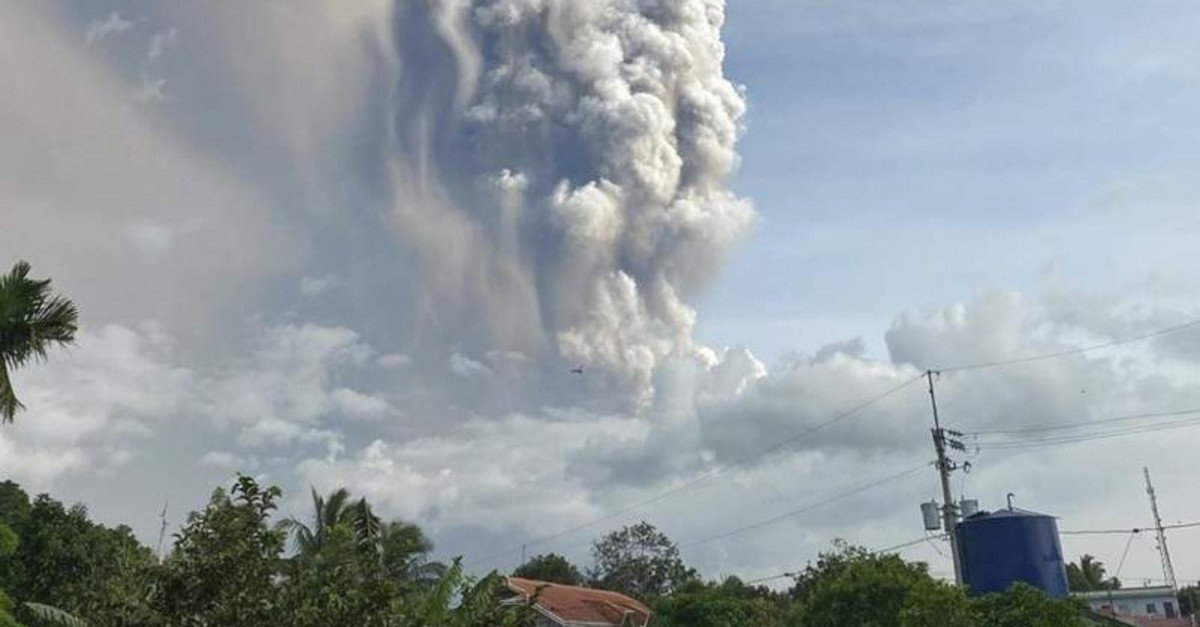 A small volcano near the Philippine capital of Tagaytay that draws tourists for its picturesque setting in a lake erupts with a massive plume of ash and steam Sunday, Jan. 12, 2020. (AP Photo)
by Compiled from Wire Services Jan 12, 2020 10:03 pm

A volcano near Manila spewed a massive cloud of ash that drifted across the Philippine capital Sunday, forcing the cancellation of flights and closure of schools and government offices as authorities warned of a possible "explosive eruption." It also forced Manila's international airport to shut down.

Thousands of people were evacuated from the area near Taal volcano after it suddenly shot a column of ash and steam as high as 15 kilometers (9 miles) into the sky. Lightning crackled inside the smoke and tremors shook the ground.

Taal, one of the world's smallest active volcanoes, sits in the middle of a lake about 70 km (45 miles) south of the center of the capital, Manila. Authorities said there was a risk that an eruption could cause a tsunami in the lake.

"Taal is a very small volcano, but a dangerous volcano," Renato Solidum, head of the Philippine Institute of Volcanology and Seismology (Phivolcs), told Reuters. "It is unique because it is a volcano within a volcano."

The institute raised the danger level posed by the volcano to four out of a possible five – meaning "hazardous explosive eruption is possible within hours to days."

There were no immediate reports of injuries or damage.

The Philippines lies on the "Ring of Fire," a belt of volcanoes circling the Pacific Ocean that is also prone to earthquakes.

One of the most active volcanoes in the Philippines, Taal has erupted more than 30 times in the past five centuries, most recently in 1977. An eruption in 1911 killed 1,500 people and one in 1754 lasted for a few months.

"That is the worst-case scenario," Solidum said.

About 8,000 residents of the volcano island and other high-risk towns were being evacuated, with about 6,000 already out of the danger zone by Sunday evening, the National Disaster Risk Reduction and Management Council told reporters.

About 300,000 people were targeted to be moved to safety in Batangas overnight and in the next few days. "We have asked people in high-risk areas, including the volcano island, to evacuate now ahead of a possible hazardous eruption," Solidum said.

Renelyn Bautista, a 38-year-old housewife who was among thousands of residents who fled from Batangas province's Laurel town, said she hitched a ride to safety from her home with her two children, including a 4-month-old baby, after Taal erupted and the ground shook mildly. "We hurriedly evacuated when the air turned muddy because of the ashfall and it started to smell like gunpowder," Bautista said by phone.

The drifting ash forced the cancellation of 172 flights in and out of the international airport on Sunday. General Manager Ed Monreal said flights would also be suspended Monday because there was ash on the runway.

President Rodrigo Duterte's office ordered the suspension of government work in the capital and of all school classes in Manila and other areas affected by the ash. A statement advised private companies to follow suit.

In Manila, long queues formed in shops selling face masks as health officials warned of possible breathing problems for people with respiratory ailments and urged the public to stay indoors and use dust masks when going out.

"When I went to my car to bring my groceries, I saw it was covered in ash. So I hurriedly went back inside to buy a mask from a drugstore but they had run out," said Angel Bautista, 41, a resident of Paranaque city, south of the capital.

Taal's ash plume was clearly visible from the city of Tagaytay, a well-frequented viewing spot for the volcano.

"We were having lunch when we heard rumbling. We saw the volcano erupting. It rained and some small pebbles fell to the ground," Jon Patrick Yen, a restaurant customer in Tagaytay, told Reuters.

"I did not expect to see such spectacle. We just went by to eat."